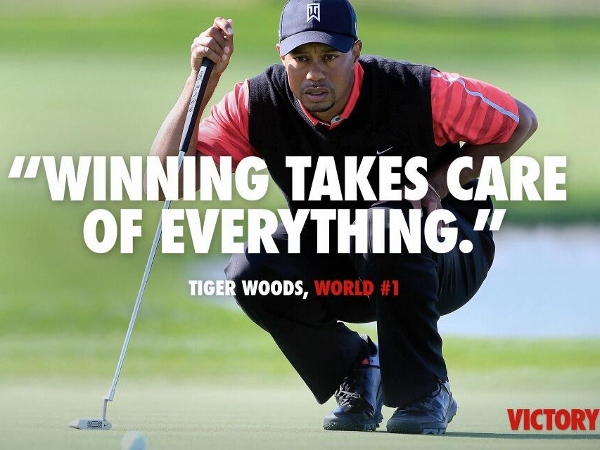 Winning takes care of everything.

At least that’s what Nike would have us believe, plastering the aforementioned slogan over a Tiger Woods pose and releasing it to the world just hours after Woods reclaimed world number one status.

On cue, his many critics came out of the proverbial rough, harking back to Woods’s highly publicized infidelity and subsequent failed marriage, stating that no amount of golfing success can atone him of past sins.

The backlash should hardly have come as a surprise, and in all likelihood, Nike would have expected such a response. Tiger’s detractors again opted to forgo any professional criticisms – his struggles off the tee didn’t get a mention – and instead attacked him on an incredibly personal level.

Rather than offering some sort of window into Woods’s soul, all that critics following this train of thought prove is that they never understood who they were dealing with.

When the swing of a golf club by a wife scorned brought Woods’s world crashing down, one of the single greatest character assassinations of an athlete seen took place. Tabloids that had never mentioned Woods during his record-setting career suddenly plastered him on front pages, and proceeded to judge a man over matters of his personal life – matters that were really never any of the general public’s business to begin with.

However, collectively, we all persisted. Somehow, by carrying on a series of affairs during his marriage, not only had Woods wronged his wife, he had wronged all of us. His pound of flesh needed to be paid.

Yet, all the while, Tiger never complained.

As his endorsements evaporated into the ether, Woods set about rebuilding not his public image, but his game. Winning was always paramount to Tiger, and no amount of Us Weekly articles or episodes of The View dedicated to detailing his infidelity would change that.

Lost in the hyperbole and damnation of his public fall from grace was how drastically his performance dropped. Suddenly, the seemingly invincible star had gaping cracks in his armour, as injury and poor form led to an unimaginable slide down the rankings.

Before his resurrection could take place, he needed to get healthy.

Once the body was willing, he set about fixing his game.

Years have been spent working on the most basic element – his swing. For all intents and purposes, Woods started from scratch.

Ahead of the Players Championship in 2012, Woods spoke of the painstaking process.

“The fruits have been pretty good on the back side of it, and I think so far I’ve shown some nice consistency, and I’m still working,” he told the assembled media crowd. “I just haven’t had the time because obviously the injuries I’ve had.

“It takes a little bit of time, and I keep building, and things eventually come around to where they feel natural and efficient. I think that’s probably the most important word, is that you get out there and you feel efficient in what you’re doing.”

In 2013, it seems that he has turned the corner. His blistering start to the season, while certainly still far from perfect, has seen him get back to what matters most – winning.

Throughout his historic career Tiger Woods has always been more than a golfer, due to the complex narrative that surrounds him.

Yet, for Woods, it’s always been simple.

On the eve of his quest to capture a fifteenth Major Championship at Augusta this weekend, the question of that Nike commercial came up.

“That was an old quote that Nike put out there and people jumped on it. But that’s something that I’ve said since I first turned pro.”

In the world of Tiger Woods, winning doesn’t fix everything.

It’s the only thing.