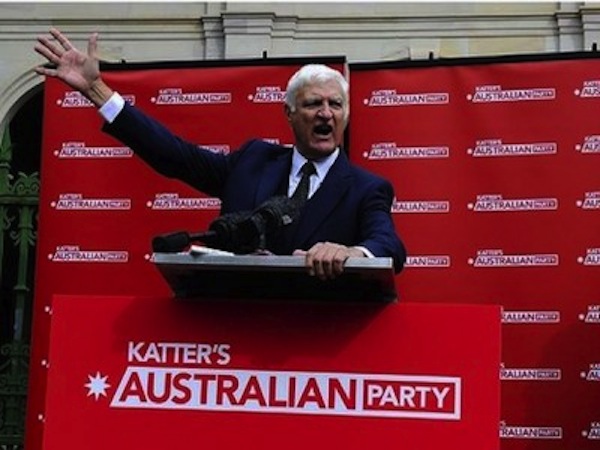 “The sun rose in the morning, I said my prayers to the good Lord and it was a fun place,” reminisces Katter.

“I was a fun bloke without a care in the world.”

Bob Katter has nothing but fond words about his earliest memories in his political career. It was 1974, the Premier of Queensland was Joh Bjelke-Petersen and Katter was representing the electorate of Flinders as a member of the Queensland Parliament.

“I remember we had great fun. We had the biggest majority recorded in Queensland history, and we had no work to do. Joh made all the decisions, so it was a happy holiday,” says Katter.

Fast-forward 39 years, and how things have changed.

He is now a federal leader of his own political party fast approaching its first federal election, and he is a man on a mission.

Katter’s Australian Party (KAP), created in 2011, was established and formed upon policies that closely mirrored Katter’s own beliefs and morals.

“Now I see a rising tide with industry after industry drowning,” he adds.

“I feel that it’s not a burden. I feel that I’m not carrying the horse, the horse is carrying me and he’s going at a full gallop.”

Despite being touted by Katter to win up to five senators in this year’s election – a prediction that would place the party in a powerful position – KAP has had its fair share of controversies.

As recent as January this year, KAP member Tess Corbett was stood down from the party over comments she made comparing homosexuality to paedophilia.

A month later another KAP member, Bernard Gaynor, resigned from the party. He said the KAP “failed to oppose abortion” and he questioned the party’s position.

Yet Katter remains solid on these issues, strongly contending that they are not relevant to his political platform.

He has been asked on several occasions to comment on the issue of homosexuality and is yet to give a definitive response to where he stands.

“I don’t talk about it, and quite frankly I get a bit short tempered when you or anyone else ask me questions about it, because we are not interested in it one way or the other.”

But Katter is not naive to the fact that controversy is bound to follow his position on such issues.

“A new party has a maturing and growing experience, and she’s a very rocky road growing out a political party.”

However, he adds that his party was actually formed as nothing but a last resort in politics following the 2010 hung parliament.

“I didn’t have anywhere else to go, I had tried everything humanly possible to turn things around in the National Party, but they were just rubber stamps for the Liberals.”

Katter along with two other independent Members of Parliament (MP), Tony Windsor and Rob Oakeshott held the balance of power in the hung parliament. However, Katter was left out in the cold when he chose to back the Coalition while Windsor and Oakeshott backed the Labor party.

“They made their decision and they were left to live with it. But as far as I’m concerned they have been pretty close and near enough to being members of the Labour party,” says Katter.

“So the independents had failed Australia in my opinion, and I was finished with being an Independent.”

Ironically, his decision to leave the National Party back in 2001 and become an Independent MP came as a result of Katter failing the people within his electorate of Kennedy.

“I had the biggest dairy area in Queensland and I knew what would happen to them and I felt it was partially my fault. I was the party that had done it to them,” says Katter.

“I reached the stage where I couldn’t walk down the street and look people in the eye.”

He then became an Independent.

“But anyway I couldn’t live with it any longer. At least I wasn’t part of the problem,” he said.

“I dreamed that maybe somehow, somewhere that we independents would get a few seats and act together and we’d get a restoration of an arbitrated price for milk, we’d get ethanol into Australia, we’d get all these things done.”

If Katter’s Australian Party has indeed gone through the ‘maturing and growing experience’ as Katter describes, then his party is definitely heading in the right direction in the lead up to the September federal election.

Jake Keating is a second year Bachelor of Sports Journalism student at La Trobe University. You can follow him on Twitter: @JKeats10