Although the Frankston Blues' forward is entering the prime of her basketball career, she opens up on her willingness to help others post-basketball. 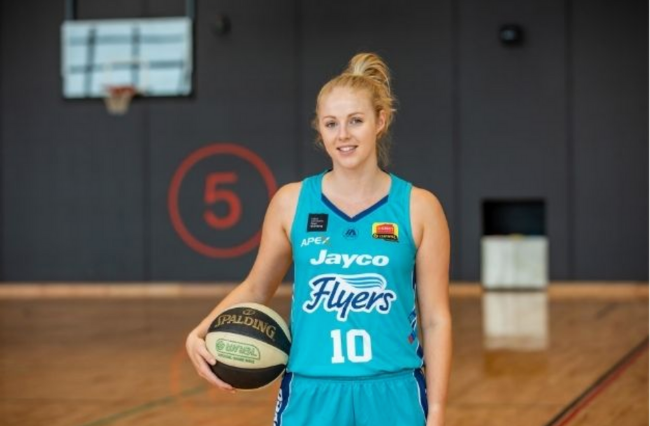 Coming out of the Australian Institute of Sport at the age of 18, basketball player Kiera Rowe had an opportunity to play college basketball in the United States, a popular route for most basketball prospects due to the large popularity of the sport in the US.

But Rowe decided to turn pro and play for the Dandenong Rangers in the WNBL, because even from a young age, Rowe had one eye set on her career post-basketball.

“I certainly couldn’t cope with being just a basketball player in my opinion,” Rowe told upstart.

“I was really set on doing physiotherapy at university for a long time…I think your life outside of sport while sport is so important and amazing, I think it’s so important to have balance and that’s where university comes into it.”

Currently playing for the Frankston Blues in the NBL1 after playing for the Southside Flyers last season in the WNBL, Rowe’s life has been guided by her passion to go up in the ranks in basketball. It was just last season that her team made the WNBL Finals, narrowly losing to the UC Capitals.

At 21 years old, Rowe knows it is not always easy trying to prove yourself in professional basketball. She was reminded of this in the finals this year when despite being named in the team, had zero game time over both games.

“Honestly, it’s tough, very tough…you got to try and prove yourself often with quite limited opportunity especially because every game, in something like the WNBL, is a tough game and the coach and team want to win,” she said.

“If you go out there and you’re not playing your best you’re going to get subbed and not play the rest of the game straight away, so it is tough.”

But fuelling Rowe’s motivation is her desire to improve and reach the heights of other players before her, like her idol two-time WNBL all-star and champion Jenna O’Hea. O’Hea was Rowe’s teammate last season with the Southside Flyers, another milestone that Rowe speaks fondly of.

“She’s someone who I’ve definitely looked up to most of my life,” Rowe said.

“I find my motivation from looking at other players who are more experienced, older and just amazing players and being in awe of them. Thinking that’s just what I want to be like and just to go after it.”

This drive to improve is not only Rowe’s attitude towards her own basketball endeavours, but also to those around her, such as the younger players that she coaches at Michele Timms Academy, where she does both group and private lessons.

A memory Rowe holds dear throughout her own basketball career is the 2016 FIBA Under 17 Women’s World Championship where Australia defeated the previously undefeated USA to move on and win the gold medal against Italy.

“It was probably my biggest achievement so far; it was just unbelievable and still you look back now almost like you forget about it and don’t believe it. I find myself sitting there sometimes thinking ‘wow I actually did that, that’s awesome!’,” she said.

But nothing lasts forever, especially a sports career. This has led to her doing a degree in physiotherapy as part of La Trobe University’s Elite Athlete Program, another opportunity for Rowe to help others be the best they can be.

“I’ve always been interested in the human body, how it works, it’s such an amazing thing everything that your body can do. I guess just how we can play sport and do all these amazing athletic things and your body can recover, heal itself and train and all that stuff is just amazing to me. So that’s kind of where it started from,” she said

“I think at the end of the day it’s just coming back to wanting to help people to have the best quality of life possible, is also what really drove me to physio.”

It is a mentality that can only be admired, and one that’s proved efficient for her over the years.

Rowe doesn’t know when she will finish her degree or reach the heights of her sporting career that she hopes to, she just knows that at some point, if she keeps improving, then she will.

Patrick Morrow is a second-year Bachelor of Media and Communication (Sport Journalism) student at La Trobe University. You can follow him on Twitter @Patrick92088625.