The grafitti artist behind the huge Kim K mural in Melbourne speaks to Caitlyn Leggett about his new project to paint the city in nudes. 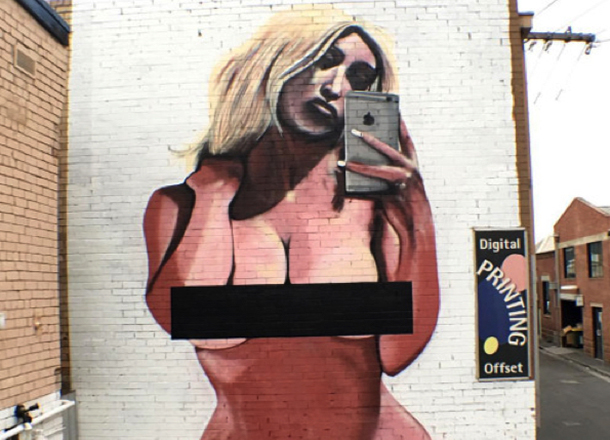 We’ve all seen the photos of it. We’ve all talked about it. Social media blew up over it and the artwork gained international attention including from Mrs Kardasian-West herself. But who was behind the two-story sized graffiti artwork?

That would be Melbourne born and raised artist Lushsux. 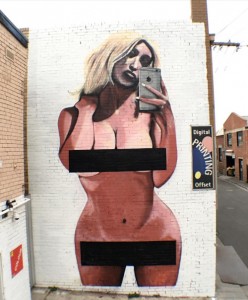 “When I saw it, I had to paint it 30 feet high on a wall in public,” the artist, who also goes by the name of Mark Walls tells upstart.

The controversial street artist admits he somewhat expected all of the attention.

“It was a big mural of Kim K… and two story high, nude women painted in a public space tend to elicit a reaction,” Walls says.

“I thought the follow up to the original nude she posted was also pretty good for a huge wall, although Sydney didn’t quite take to it as well as Melbourne,” he says,

Last week, the Sydney City Council ordered the image to be removed after a single complaint from a disgruntled neighbour. “Can’t say I was surprised,” Walls says.

After the controversial artworks of the Hollywood celebrity, Walls posted an Instagram photo which read ‘send nudes and I will paint them on walls’, meaning Kim K’s was just the beginning.

“I was thinking about updating the way the classical nude could be painted by asking for people to send nudes in DM (direct message). It actually worked,” Walls says. 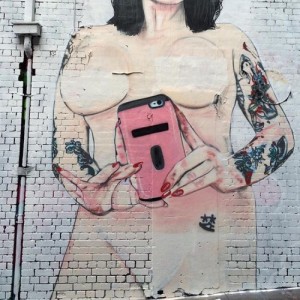 And as promised, giant nude graffiti murals have been popping up all over the state since he started the ‘project’ two weeks ago.

The first two appeared in famous graffiti hot spot Hosier Lane on March 22 and featured two young woman that – unlike Kim K’s murals – were not censored at all.

But the portraits didn’t go uncensored for long, as the exposed nipples and privates were painted over by council contractors shortly after 9am.

Walls and his muses were disappointed by the councils movements but a City of Melbourne spokesperson told The Sydney Morning Herald they were simply following the council’s street art guidelines.

“These guidelines correspond with the Australian Public Broadcasting guidelines for nudity in advertising and public places.”

Melbourne City’s graffiti management plan explains that it is a criminal offence in Victoria to “create offensive graffiti that is visible from a public place if that graffiti would offend a reasonable person” and that includes if it is distressing to children.

“The appropriateness of images to children is relevant because this graffiti and street art is located within the public space,” the plan reads.

But this didn’t stop Walls from continuing the nude paintings.

On March 31 Lushsux posted a photo on his Instagram of a seven story high mural depicting a naked blue-haired woman which appeared to be on the side of a large warehouse.

Comments on the photo hinted the artwork was located in the nearby city of Geelong.

The photo was quickly removed by Instagram for containing nudity but Walls was quick to repost a censored version with the caption reading; “Instagram censored me… again! Even though [sic] their terms of service states that nudity in art is permitted, these pieces aren’t even sexual in nature”. 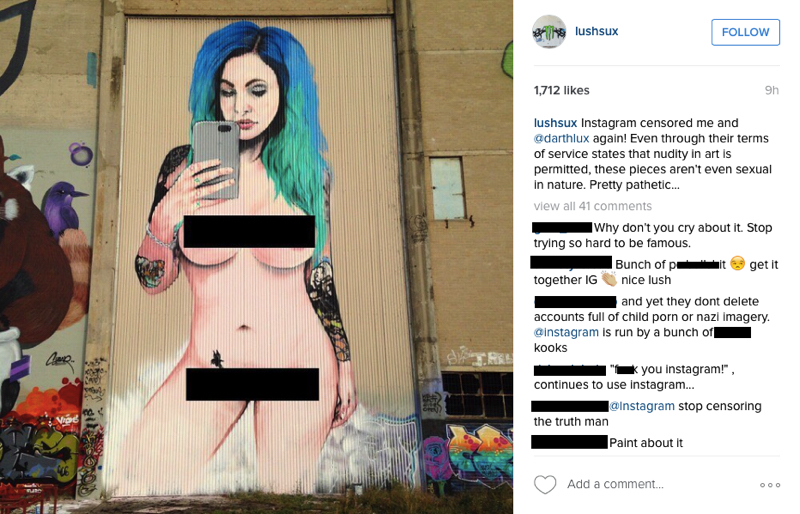 This reaction mimicked Instagrams response to Walls post the day before, which might just be noted as his most controversial piece of work yet.

The photo on Instagram revealed a graffiti mural of a nude, blurry faced male noted to be of Mark Walls himself as he stands – censored – on a cherry picker beside the masterpiece.

When upstart interviewed the artist just days prior, he warned us of this. “I might paint one of myself next, but I’m sure that won’t go down too well,” he said.

Well supporters across social media would disagree as people have commented their approval and praise for Lushsux, eager for what’s next.

Watch this space, it may just end up naked and 30 foot high on a building near you.