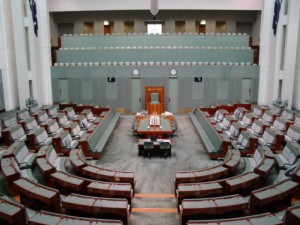 The internships will allow students to be based in Crikey‘s Press Gallery office for a week at a time, to attend a range of ministerial briefings and media conferences, observe Question Time in person and interview members of parliament.

Students will be encouraged to work on in-depth pieces of journalism exploring topics they think deserve more attention and will be mentored by Crikey‘s Canberra correspondent Bernard Keane and Business Spectator political columnist and journalism lecturer Rob Burgess.

‘When La Trobe suggested sending its top students to parliament house, we jumped at the opportunity to broaden the coverage coming out the Press Gallery and help create the next generation of journalists at a time when media markets are fundamentally reshaping this important role in Australian democracy,’ says Crikey editor Jason Whittaker.

‘The media landscape is changing very quickly,’ says La Trobe journalism lecturer and political columnist Rob Burgess. ‘But as fast as traditional models of journalism are collapsing, we are observing many small start-ups competing to become the news media publishers of tomorrow.

‘Crikey and Business Spectator have both made important contributions to finding the new business models that will underpin fourth-estate journalism in future.

‘Giving students an insight into how the small, independent publishing model works, and giving them on-the-ground political reporting experience, will help ensure a future for the robust, principled journalism that Australian democracy relies on.’

The first two internships, each involving two students, took place in June and August and future internships will be run throughout the parliamentary year.

La Trobe journalism student Emil Jeyaratnam, a former editor of upstart, was one of the first students to head to Canberra.

‘I was able to meet and interview Bob Katter and Barnaby Joyce for a feature I was writing on food security and agriculture in northern Australia.

‘When Prime Minister Gillard raised these topics on a trip to the Kimberley, Crikey published my piece with information and opinions no other media outlet had. It’s incredibly exciting to be that close to the national political debate and play a role in shaping it.’

Future student interns will be chosen through a rigorous selection process within La Trobe’s journalism program.