The planned move back to Western Australia is reportedly family driven. 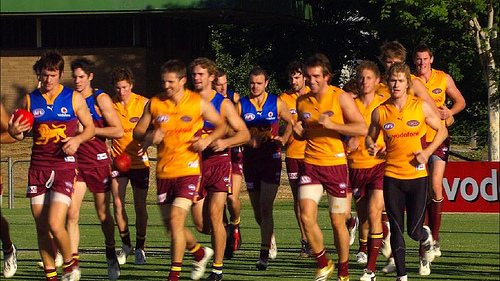 Brisbane Lions GM Danny Daly has spoken this morning on the shock rumour that star midfielder Lachie Neale is going to request a trade back to Fremantle.

7 News Perth first announced the development on Sunday night completely blind-siding the Lions less than 24 hours after their exit from the AFL Toyota Finals Series.

Daly saying that the club will release an official statement later today.

“I can’t make any comments because I haven’t spoken to Lachie. I think the club will come out and make a statement sometime this afternoon once we’ve had a chance to speak to Lachie and work through it,” Daly told Radio TAB.

Daly also hinted that they had no idea the trade request was coming.

“It’s all news to us as far as we’re concerned. He’s got two years of his contract left and that’s where it’s at.”

Although there has been no formal trade request made yet it seems only a matter of time before Neale officially asks for the trade.

Neale last played for Fremantle in 2018 and his likely trade request is suspected to be family driven. Neale’s wife Jules is pregnant with the couples first child and Jules’ family are located in Western Australia. The couple is reportedly “keen” to raise their child on the West coast.

Neale’s teammate, Mitch Robinson, became embroiled in the trade saga last night when a photo of a tweet was posted attacking Neale. The message calling Neale a “selfish twat” had Robinson’s Twitter profile pic photoshopped onto it, making it appear that he had posted it.

Robinson this morning tweeted that the image was “fake”.

With two years remaining on his contract a suitable trade will have to be found between the two sides. Neale has become one of the games star midfielders since his move to Brisbane and Fremantle will have to pay accordingly.

If the trade request comes to fruition as expected it means Neale’s last game for the Lions was Saturday night’s dramatic 1-point semi-final loss to the Western Bulldogs.

Neale’s Lions career would come to an end after three quality seasons seeing him claim two best and fairest’s, two All-Australian jackets and the 2020 Brownlow Medal.

Photo: Brisbane Lions at training by ernie_greatoutdoors available HERE and used under Creative Commons Attribution. The image has not been modified.