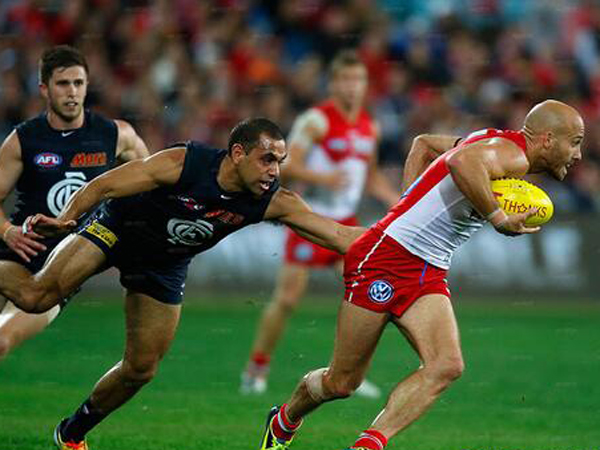 Jarrad McVeigh put in a performance for the ages on Saturday night, single handedly destroying Carlton to book a preliminary final berth for the Swans.

Sydney is now only one win away from another date at the MCG on the last Saturday in September, for the fourth time in nine years.

McVeigh’s performance on Saturday night was one of the best in finals history – and certainly a stark contrast to his output just eight days earlier, in Sydney’s 54-point thumping at the hands of Hawthorn.

Against the Hawks, the Sydney co-captain had a heavily bandaged calf, and looked to be struggling with fitness all night, primarily playing deep in the back line. Things got worse for McVeigh when he twisted his knee in a tackle late in the game, putting him in doubt for the clash against the Blues.

But as the 218 game veteran has shown throughout his career, resilience and courage willed him over the line and he delivered emphatically.

McVeigh, suspect knee and all, was thrust into the middle right from the opening bounce and was the catalyst to the Swans’ big win.

The midfielder amassed an astonishing 20 disposals in a record breaking second quarter. It was the most disposals collected in a single quarter in an AFL final, surpassing Geelong’s Corey Enright with 19.

Along with a game and career high 42 disposals, McVeigh kicked two goals, including a skilful right foot banana.

He racked up a game high nine marks, five tackles, five clearances, five rebound 50s, and had an 88 per cent disposal efficiency. By anyone’s standards, he played a complete game.

Swans co-captain Jarrad McVeigh is leading from the front. He had an #AFLFinals record 20 disposals in the 2nd term pic.twitter.com/B2bQ47V74Y

McVeigh has been used across half-back for most of the year, with injuries to running defenders Rhyce Shaw and Marty Mattner leaving a void in the Swans’ defence.

But with its season on the line, Sydney coach John Longmire decided to throw his co-captain into the engine room, and it reaped immediate dividends.

“He’s developed into just a superb leader,” Longmire said, after the Swans’ win against the Blues.

“His ability to be able to lead the group on the ground has been sensational.

“He really knows his football and he just digs deep and has got an enormous amount of resilience and is fantastic off the ground as well.”

The resilience Longmire may have been referring to is something no parent should ever have to endure.

A month after her passing, in his first game back, McVeigh led his team to an upset win against Geelong at Simonds Stadium, where the Cats had not lost in 1462 days.

McVeigh and his wife overcame the heartbreak and had another baby girl, in July 2012. In a now infamous photo, the Swan is seen holding his child, with his wife, following the Swans’ premiership triumph last year.

Well done @sydneyswans! What a way to round up the year for Jarrad McVeigh and his beautiful family! pic.twitter.com/guTGRl5L

On Monday night, McVeigh’s outstanding season was recognised with a maiden All-Australian appearance, named on the half back flank. McVeigh was ranked sixth for total disposals, in season 2013, averaging 27 touches per game.

Finals football is where the best players stand up and are counted and the best leaders lead by their actions, and McVeigh has done exactly that.

Ryan Lepore is a third year Bachelor of Journalism (Sport) student at La Trobe University, and a staff writer for upstart. You can follow him on Twitter @ryanlepore.