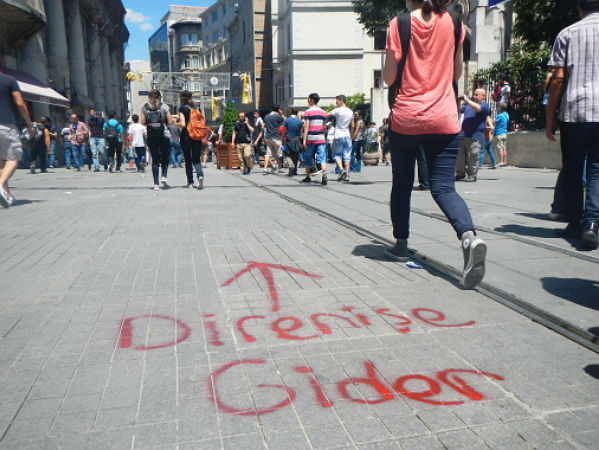 If I’ve learned anything from this week, it’s the Turks are a proud bunch.

They have every reason to be. The Turkish public is widely regarded as welcoming and kind-hearted, Istanbul is graced with many beautiful buildings from empires past and the national economy is booming in the face of wider European decline. As the weekend’s events indicate, this pride can manifest into a defence of fellow, persecuted Turks.

Having heard news via foreign media of police breaking up a sit-in protest in Taksim Square, I changed plans and made sure to avoid the immediate area around Taksim but continuing to Galata Tower and surrounding areas a few kilometres away. Little did I know people of Istanbul from all demographics would comes out in force to support a small group of tree-huggers to form the biggest Turkish protest in a decade.

I couldn’t even fathom the police response would be as brutal as the day before.

Entering the south end of Istiklal Street (Istanbul’s equivalent to Bourke Street Mall), chanting and clapping reverberated through the shopping district. Shop roller doors slammed shut as the crowd filled the street. On the other side of Taksim, more Istanbullers protested having marched from the Asian side.

Some came prepared for confrontation, donning hard-hats, goggles and gas masks. Others draped themselves in the nation’s flag. Most simply personified their support with their presence. While a lot were opposition parties’ supporters, a significant minority were political apathetic or fans of the ruling Justice and Development Party outraged at the police response the day before. 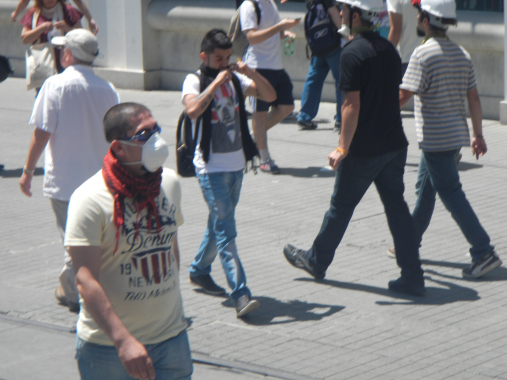 For a few hours, the protest continued peacefully. Police kept some aggressive protesters at bay with sweeping water cannons and no movement toward Taksim was made.

At 2 pm, police were given the directive to disperse the protesters as quickly as possible. Whom gave the order is a matter for the Turkish government investigation but there was no denying its brutal, aggressive application. In a matter of minutes, police vans fuelled their water cannons with tear-gas and relentlessly fired into the assembled crowd. As people frantically retreated, some police lobbed tear-gas cannisters deep into the crowd running downhill.

For an Australian, the scenes defied belief. Not only had an apparently secular government objected to kissing in public and restricted alcohol sales to night time, here was a police force going above and beyond its role to defend a public site and openly attacking its people.

The most uplifting scene however was that at the base of the hill. Protesters who had retreated to Galata Bridge were greeted with a chorus of car horns from those going about their normal Saturday duties. The message was that everyone appreciated the resistance.

Unlike in Australia where opposition thoughts are freely voiced through the media, the Turkish media largely ignored the events. The country’s main television station broadcast a cooking show as dozens of protests simultaneously rang out around the country.
Enough noise was made around Istanbul that police packed up and went home, the city’s grand square open to the public soon after 3 pm.

On Sunday, I returned to Istiklal Street to see the shopping district in its true glory. Clothes stores, restaurants and movie theatres reopened as tens of thousands celebrated on their way to a packed Taksim Square. Thousands of Turkish flags flew proudly and the crowd chanted for an government apology.

Whether an apology will eventuate is unknown. Turkish politicians typically never take a backward step and as Turkey’s most popular politician for 75 years, Prime Minister Recep Tayyip Erdogan has never needed to retreat.

One thing is for sure: of the unplanned but united political resistance this weekend, the Turks can be proud.

Luke Costin is a second-year Bachelor of Journalism student at La Trobe University. You can follow him on Twitter: @LukeCostin