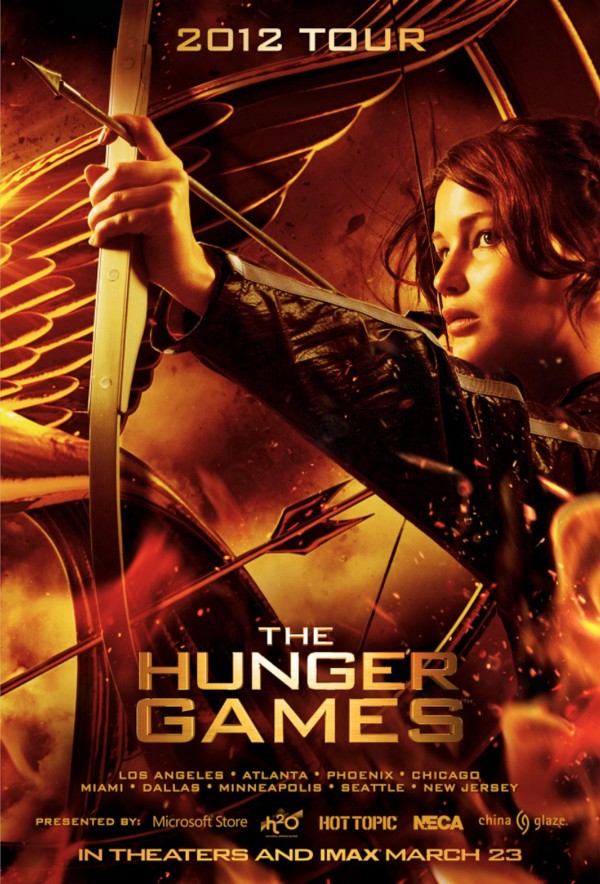 ‘Welcome, welcome. The time has come to select one courageous, young man and woman for the honour of representing District 12 in the 74th annual Hunger Games’.

The animated voice of Effie Trinket, representative of the Capitol echoes through the District 12 meeting headquarters. There appears a stark contrast between Effie Trinket’s excessively eccentric world in which she and the rich social class live in, and female heroine Katniss Everdeen’s dark dystopian setting. District 12; a world that exists realms away from the Capitol, that is so riddled with despair and hunger.

The sea of faces that stare at Trinket are a reflection of the human condition. The children from District 12 live in severe poverty and fight to survive every day. Oppression and struggle is evident, none more so than in the Everdeen family who rely on Katniss’ leadership and great hunting skills for survival.  Fear wraps itself around the young adults and children that are standing, watching, and hoping they are not the ones chosen to play The Hunger Games.

When Katniss Everdeen volunteers as a sacrificial tribute for her much younger sister Primrose Everdeen, readers and audiences of the hugely successful Suzanne Collins book (turned into film) begin a journey. This is the beginning of an adventure which requires the understanding of moral complexities, the overcoming of social class struggle, defying unfavourable odds and above all – survival. Quite simply put to Katniss by her mentor Haymitch Abernathy ’embrace the probability of your imminent death’ or win.

In a transfusion that is William Goulding’s Lord of The Flies meets George Orwell’s 1984, author Suzanne Collins creates a novel that explores timeless themes and perplexing ethical questions.  Collins poses a most extraordinary situation to her audience. What is our game plan when the game endorses the motto, kill or be killed?

The Hunger Games take place in the overindulgent Capitol, where the political agenda is governed by the rich minority who choose to bet and sponsor participants based on face value. Katniss is forced to portray an image in which she is appealing to a solely superficially concerned public. Katniss’ character displays much of the similar inner conflict as George Orwell’s protagonist, Winston Smith. In 1984, Winston Smith was forced by Big Brother to alter historical documents which he knew to be true. Winston battled with what he knew to be right and what Big Brother wanted. Katniss sways to and fro with her persona of ‘the girl on fire’ and the strong resourceful female hunter she knows she is. The struggle also emulates that of Ralph, who acts as chief of a group of military boys stranded on a deserted island in Lord of the Flies.  Ralph concedes to a different more popularly liked image in order to retain leader of the group.

Collins explores the concept of a star crossed love affair through her main characters, Katniss and Peeta Mellark, and how this image has the ability to manipulate the outside public sphere.  Peeta, the weaker of the two competitors is the catalyst for a love forged between the two. He states in his interview to Casear Flickerman before an audience of millions that the ‘girl that I’ve had a crush on forever… came here with me.’  The cliché that love is a battlefield has never been used more aptly. By Katniss fulfilling an identity to which she is romantically inclined towards Peeta, she ultimately saves her companions life. The audience of The Hunger Games both book and film bear witness to a fascinating love plot in which both characters become slightly confused, since the blurred line of reality after days in the game can sway emotions – real or fake.  It is evident that the author draws on Shakespeare’s most famous love story, Romeo and Juliet for inspiration and direction taken by her young leads.  It is argued by fans that this plot line takes away from the strong heroic character that is Katniss Everdeen, however, the compassion and tenderness demonstrated by Katniss is an appealing trait and one to be admired.

When Katniss Everdeen is lifted from the tube and onto the platform to enter the game we too as an audience become a part of the hunt.  In turn, our imagination places us in the most improbable of places faced with the overwhelming task of fight or flight. So much of how we humans battle for survival is evident within the first few minutes. In a barbaric stance, we watch man destroy man in a furiously aggressive and un-remorseful way.  Fear rings true.  These acts can be compared to the way in which the boys in Lord of the Flies turned brutal and hostile towards each other. Heroine Katniss Everdeen holds onto hope, unrelenting to concede. The ending of The Hunger Games proves that, ‘hope is the only thing more powerful than fear’.

Suzanne Collins global phenomenon was inspired by her channel surfing. Flicking between competitors of a reality television show and the invasion of Iraq; the lines between the two became distorted.  Thus, the origins of The Hunger Games was born.  Although Collin’s often states this as her soured of inspiration in interviews, the themes and questions she asks in her novel are timeless.  Love, death and power are old friends and foes. We must just always hope that the ‘odds be ever in our favour’.

Clare Cosgrave is in her third year of a Bachelor of Journalism at La Trobe University. You can follow her on Twitter: @ClareCosy.