Jenny Dickson returned to Melbourne from an overseas trip to Italy, and after her long journey back via the UK, developed symptoms and tested positive for the coronavirus. 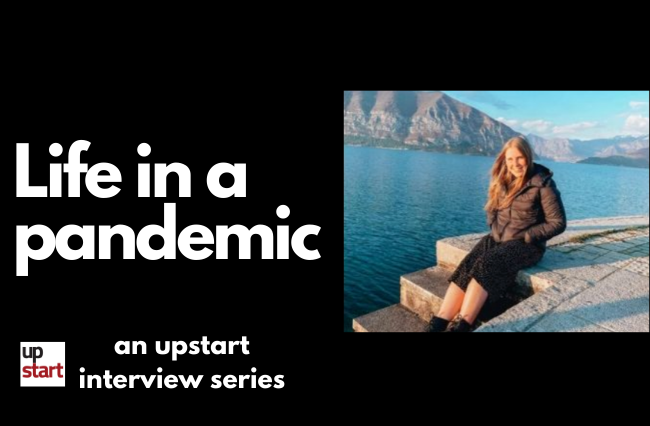 Jenny arrived in Bergamo, Italy, on 2 March, at the start of what was to be a nine-month trip around the world. Only a week in, a full-scale lockdown was announced, and she escaped on a near empty flight to London. After 16 days in the UK, she returned home to Australia, where, while in quarantine, she developed COVID-19 symptoms, and tested positive for the virus.

Tell us about the flight back to Australia.

I booked my flight a week in advance, but when I showed up at the airport, it was madness. It was full of people trying to escape because it was full lockdown and we thought that, again, flights would be cancelled, and if you didn’t get out now you would be stuck for good. When I got on my flight it was pretty much full, I was lucky that there was actually a spare seat next to me. I ended up talking to some of the people on the flight, and they all said that they had to book last minute tickets that cost two, three, four thousand dollars, because their flights were cancelled. They didn’t care about the price, they just wanted to get home safe. Everyone was just really scared. We didn’t know what would happen, or if we would be stuck in the UK.

So what happened when I did arrive (in Melbourne) was they just made us fill out forms saying we have arrived from overseas, this is where we live, this is our contact information, so they can check up on us and make sure we are self-isolating.

When did you suspect you may have coronavirus?

When I was in the UK, a week before I came home, I had a headache, which is nothing crazy, that could have been anything. But then I had a runny and blocked nose, and I started to get a little bit concerned. The week before I left I was pretty much isolating in a hotel with someone else, and they were coughing. So, I thought, if they have it, well, I have to have it. Then, I arrived home and I had really mild symptoms for about a week, but then I got really [sick], like my throat was sore, and my nose my[sic] running, I had a headache, and I was coughing a bit. I also experienced chest pain once or twice, and was extremely fatigued, sleeping for 12 hours a night. The one symptom that I think really nailed it, that I thought it was coronavirus, was my loss of smell. Mum noticed that I couldn’t smell anything, because my sister would complain that I was using disinfectant spray in the bathroom, and she would say it stinks so much and I didn’t realise it had a smell. As soon as mum said that, she said, “that’s one of the symptoms, I reckon you have definitely got it”. It had been two weeks at home, and my self-isolation period was over, but I still felt sick, so that’s when we went and got tested, and it came back positive.

We just had to ring our local doctor, so they did it for me in Cobram, What happened was, we weren’t allowed into the actual centre, so we had to stay in our car and drive up to the hospital. We rang the doctor to let them know when we were there, and then she came out fully kitted with gloves and a mask and goggles, fully protected from us, so mum and I just sat in the car, wound the windows down, and she said “I’m just going to take a swab”. It was pretty much like a really long [cotton bud], and then she just swabbed the back of our throat and then went through our nose and swabbed the back of our throat again. I was scared of it because people had said, and she said, it’s not comfortable. It was uncomfortable, but it didn’t hurt. It only took 30 seconds and it was over.

How were you monitored after you were officially diagnosed?

Someone from the health department rang me every single day to check on my symptoms, and then, after a week or so, they said, “look, we think you’re ok, so you can go”. It was all just self-reported. So I’ve just been thinking, there are lots of people out there who could be saying, “oh yeah I feel better”, because they have been in isolation for five weeks and are absolutely sick of it, and the department of health is not doing anything concrete to prove that we are better. So, I have a letter from the government saying that I’m better, but I don’t actually know for sure. I was disappointed by that. They said that they didn’t want to waste tests on us, but we are the target people that should be getting tested again.

Phoebe Doyle is a second-year Media and Communications student (Journalism) at La Trobe University. You can follow her on Twitter @phoebedoyle_