Yuki Kawasaki, editor of Japan's Mixmag talks about the impact of COVID-19 on his career, and Tokyo. 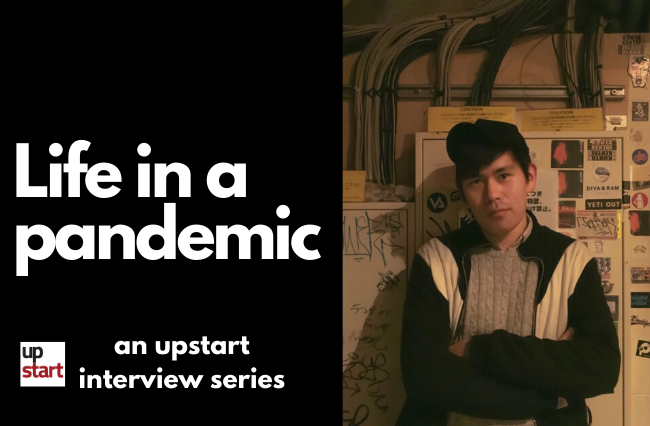 With nearly 100 cases of COVID-19 being identified each day in Tokyo and the government declaring a state of emergency, the Japanese music industry is under a lot of pressure. Numerous festivals and concerts have had to be cancelled, and countless clubs and bars are now closing their doors.

Yuki Kawasaki is the chief editor and CEO of Mixmag Japan, a magazine and media brand that covers dance events, and reviews music, festivals and night clubs. On Saturday 28 March, he ran a livestream show with no physical attendees in CONTACT, a club in Shibuya, Tokyo’s nightlife district.

Kawasaki told upstart about the impact of COVID-19 on the clubbing industry, why people are angry with the club scene, and why, for Japanese people, he feels self-isolation is almost normal.

You were the moderator of the event “Live from Studio X CONTACT Tokyo” as Mixmag Japan’s chief editor. Why did you decide not to have audiences?

I did it to prevent the spread of the new coronavirus, as advised by the administrative divisions of Japan where officials are urging that we practice social distancing.

CONTACT has decided to close its venue for a while, but will continue to provide quality music via live stream from its main floor, Studio X. On Saturday, 8,000 people joined the stream with multiple DJs playing different genres such as techno, house and other kinds of music.

To be honest, we didn’t expect such a large number of viewers. We expected about two to three thousand.

It’s been more than a month since the first case of COVID-19 was identified in Japan on 21 February. What impact has the virus had on your industry?

So many events were cancelled due to the Coronavirus. There‘s too many to count.

I had to make some workers redundant. We usually have five people, but I had to lay off three in my company. It’s a desperate but necessary move.

So many people are still going outside, all over Tokyo, even though we want to avoid this situation getting worse. But we have no choice, but to go out sometimes.

You told me that you applied for a wage subsidy last month. Did you get any money from the government?

I got a letter from Shibuya’s local council that my company couldn’t get the subsidy because we are part of the night club culture. So, I’m planning on contacting the Tokyo Metropolitan Government.

The good news is that we have a streaming service. CONTACT Tokyo will hold the streaming live show for the coming weeks. I’m the moderator of the event and will be running it this weekend as well, unless it gets cancelled.

Why would you have to cancel the event even if there is no audience?

Because, in Japan, public opinion forces us to stop public events. The public has a bad image of the clubbing culture, it is considered immoral. People are angry with us. So, the nightlife industry, especially clubbing, has been forced to stop, and we have no right to speak out.

In Tokyo, the number of patients is soaring. On April 2, 97 people were confirmed positive which marked the highest number since the outbreak and still recording the highest day by day. Do you have to self-isolate in Japan?

No. Even in Tokyo, but if you think about the cultural difference between Japan and the other western countries, we don’t have to “self-isolate” as such because we are not socially attached to other people. For example, on the weekend, it’s natural to be alone. We are usually self-isolated.

In fact, the Tokyo Metropolitan Government wants to lock down the capital. But they can’t do that, because the government does not have enough money to compensate people for covering job loss. To be honest, the Japanese government is the worst when it comes to the treatment of the music industry.

The virus spreads if people walk around. Do people know about that?

Of course. People know that they get the virus if they go out, but people are still doing the same routine.

All transportation is operating as usual, train, bus and taxi. They can’t stop.

What if the coronavirus continues affecting businesses until this summer?

Most of the businesses within the music industry are going to collapse. In my opinion, half of them will be bankrupt.

Streaming services are filling the gap. It’s only 500 yen [$7.50] to register for live streaming, so with the live from Studio X, we made approximately 4 million yen in one day.

I think I can hold my company until June but if this situation continues beyond then, I’m scared that it might collapse.

Article: Yuto Ito is a first year Graduate Diploma of Media and Communication student (Journalism) at La Trobe University. You can follow him on Twitter @Pete19889354
Photo: Supplied by Yuki Kawasaki