During a press conference in April, Scott Morrison said that it was time for international students to go home. 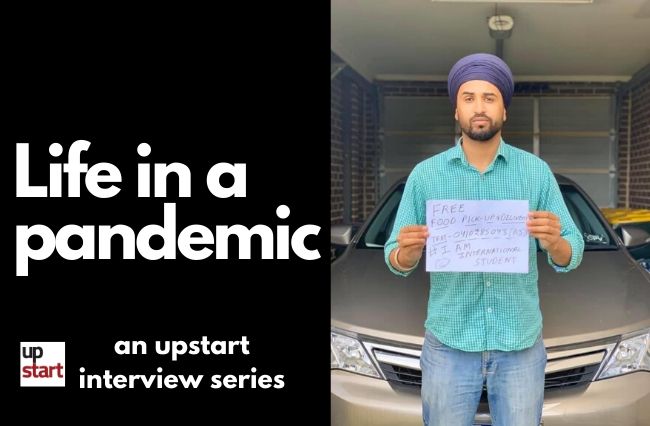 During stage one restrictions, international La Trobe student Rajbir Singh Randhawa uploaded a post on 4 April on Facebook that accumulated over 600 positive reactions from Australian users. The post was a response to Prime Minister Scott Morrison’s statement about international students on 3 April that gained mixed reactions, where he said international students should return to their home countries.

Since many international students are facing significant difficulties during this time, Randhawa expressed his feelings towards the situation in his Facebook post to give hope to fellow students.

“Don’t worry I am with you; we all are with each other. We are the winners; we are the fighters who choose the life of hard work and left our homes and families back there to start here from scratch,” he said in his post.

Randhawa also announced he was providing free food and groceries to any student in need and asked anyone living in the western suburbs to drop by extra food by contacting him. He ended his post with additional details to help and with the hashtag #IAMINTERNATIONALSTUDENT.

How have you managed to provide free food for other Melbourne students?

What are your thoughts on how the government has dealt with international students during this pandemic?

All over the world every country is looking after their international students only Australia is the only one where the Prime Minister said that you can go back if you can’t survive.

The government should release some positive statement for international students because they are already far from their homes and if the country where they came to with big hopes is not helping them, it will shake so many students.

The government should come forward and ask universities to refund the 70% of fees because now everything is online, but we paid for in class study.

Will there be struggles when getting back to the real world?

Of course, people are mentally sick now and they are treating international people very badly because they think the virus spread is by China. Jobs are lost and now getting a new job will not be an easy task.

What advice can you give international students who are struggling during this pandemic?

I just want to say don’t worry, the good thing about bad times is it’s going to pass. So, don’t worry and don’t stress. Try to follow your hobbies. Spend some time to plan your future goals. I have improved my cooking skills in the lockdown time and like that you can also improve something in you.

How has self-isolation impacted you personally as an international student?

Because I am [an] international student and I am in my last semester, my stress was already high because of last semester of course, and I must pass in any case. Due to this self-isolation, my mental stress has increased a lot and I’m worrying about my grade since everything is online and we are not used to it that much, even our staff is not so used to it.

It has also impacted me financially because I lost my job. Back in my home country, my parents are in lockdown so, they are unable to access banks so that’s why my financial support has stopped, and university is pressuring me to pay my fees. So, what do we do? The Australian government is not helping [me] with anything. I believe this is a big failure of the Australian government, they are not looking after international students which are the main part of the Australian economy.

What were ways you kept in contact with friends and family?

My one and only way is mobile, so I call back home every day, [and I] use social networking sites to do video calls.

Article: Amaal Mohamud is a second year Media and Communications student (Media Industries) at La Trobe University. You can follow her on Twitter @amaalmvh.