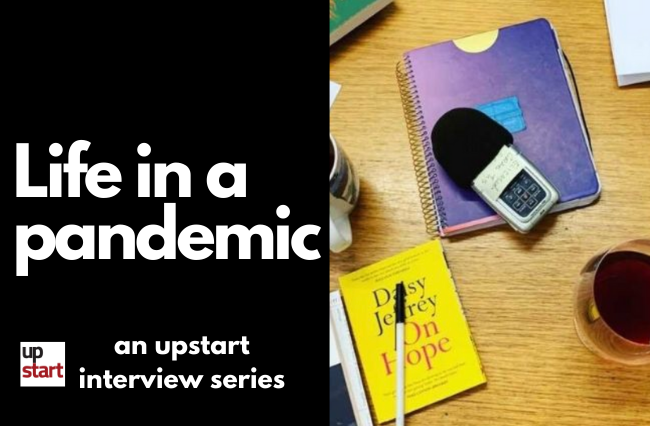 Elizabeth McCarthy, breakfast and talks producer at Triple R, is generating radio content from home for a city coping with social isolation.

With Australia implementing stricter social distancing measures to prevent further spread of COVID-19, Melbourne’s arts and music culture has been put on hold, with festivals and events being cancelled or postponed. However, radio stations like Triple R have continued to broadcast, even after losing sponsorship revenue due to COVID-19, which historically makes up 50 percent of the station’s revenue.

With fewer people able or willing to be physically at the station, IT teams are working overtime to move all broadcasting online so presenters can broadcast remotely, with many emailing in pre-recorded packages.

As a talks producer Elizabeth McCarthy generates content for The Breakfast Show and many of the one hour talk shows and Triple R podcasts. She told upstart that staff who have been forced to work from home for the duration of the pandemic, and are worried about the security of their jobs.

What’s it been like bringing Triple R into your home?

There are a lot of meetings, and this is what I’m finding with a lot of friends as well, is we’re all talking about how our work meetings are just blowing out and actually getting work done has become a bit difficult.

Everything’s taking twice as long, because the workplace has had to be transformed. I can’t walk up to someone’s desk and just have a conversation with them anymore, I have to get online, I have to work out what time they can chat to me.

Some people now don’t actually get to speak in the meetings, because the meetings are all about what’s most important to do. The staff meetings used to be far more fun and light-hearted, but now they’re very strategic and it’s all very serious.

My job is Monday to Friday and an ordinary day is going into the office, staring down the barrel of over 100 emails a day. Many of those emails are full of information and content ideas from various publicists around Melbourne. A lot of interview requests, a lot of broadcasters also getting in touch with me saying ‘Hey what do you think of this idea for my show?’, and me basically analysing a lot of information in those emails and working out what interviews I can generate for particular shows.

The amount of emails I get per day has really gone down and so many of them are COVID-19 related. You know, we don’t want to become COVID-FM. If you look at the ABC right now it’s very COVID-centric, and they have to be because the ABC are an emergency broadcaster, we are not, so we’re trying to keep a balance between COVID-19 content on air and non-COVID.

What do you miss the most about the Triple R family?

Seeing people, that’s what I miss the most: seeing my colleagues, seeing our broadcasters, seeing our volunteers. Doing FaceTime with a colleague, it’s just not the same as seeing someone face to face. That kind of connection is incredibly important. I miss sitting at my desk and chatting to people, whether that be a social chat or a work chat face to face. That’s what I really miss the most.

I’m quite an introvert at times, however I need people and I’m finding this really, really difficult, the fact that some days I’m only seeing people that I see on my morning walk and they are complete strangers. Because I live alone and a few of my co-workers live alone too, we really miss just seeing each other around the office. Triple R is an incredibly social environment so working from home alone poses quite a few difficulties.

As talks producer, have you encountered any unexpected positive aspects to social isolation?

Now that we’re doing all our interviews via Skype on the Breakfast Show, the talent is more available. However, the problem with that is for example, for the Melbourne International Comedy Festival, I had a bunch of international comedians lined up to come on the station as well as local comedians, so all those interviews were cancelled because they’ve got nothing to promote for. They’re not going to be coming out here anymore.

It means that people are more up for an interview, but what are they going to talk about if [they’re] not doing a show in Melbourne? It’s a bit tricky.

Triple R has effectively lost half its funding from sponsors closing because of COVID-19, and the other half is coming from subscribers who are potentially out of work, which further threatens Triple R’s revenue.  How is this drastic drop in funding affecting staff like yourself?

We’re all really worried. Historically, the business model for Triple R has always been 50 percent of funding comes from listeners taking out subscriptions, and 50 percent from sponsorships.

We don’t have 50 percent from sponsorships anymore. You can listen to the station and there’s only a handful of sponsorship announcements, you might hear a local bookstore talking about how you can order the books online and get free delivery at the moment.

So that is absolutely terrifying, and I don’t think I can say anything else about it, it’s just terrifying. We rely on 50 percent of our funding from sponsors.

We have our annual Radiothon every August and that will go ahead again this year, but a lot of our listeners will be out of a job and may not be able to financially support us by taking out their annual subscription.

What concerns do you have for the future of the station and the Triple R family?

The station will survive, I don’t see how it can’t. It’ll get through it, but what kind of shape it’s in at the end of this, you know in two years’ time … we don’t know.

People are worried about job security and Triple R cannot guarantee things, because we don’t know how long this virus is going to last. We’re sort of entering a bit of a great unknown and that’s scaring a lot of people.

Note: In the originally published version of this article it said “However, radio stations like Triple R have continued to broadcast, even after losing 50 percent of funding as sponsors were forced to close their doors,” it has been amended to reflect the fact that sponsors make up almost 50 percent of the stations revenue.