Patricia Ellis explains how the COVID-19 lockdown has impacted her and her students. 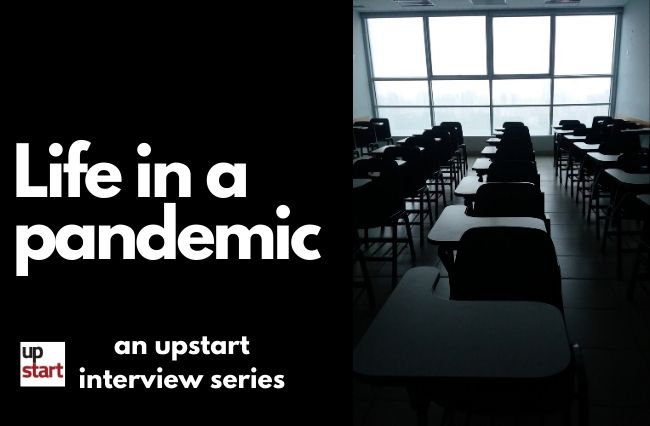 In March, RMIT University closed down all its campuses due to the spread of COVID-19 in Victoria. Patricia Ellis has been working as an English and literature teacher at RMIT Urban School for the last 15 years, where she also is a Year 11 coordinator. Along with her colleagues and students, she had to leave her traditional classroom to teach from home, now sharing her working space with her husband and her daughter.

Ellis told upstart about the pros and cons of this new remote method of teaching.

As a teacher, how are you coping with the transition to online learning? Have you needed to learn any new skills or tactics?

It was challenging to begin with because we hadn’t had a lot of training in doing online or remote teaching, but because I’m at RMIT, they’re actually quite well set up for that. It is possible for us to run video classes, to record them, and to do a lot of things that we would normally do in a classroom. Whether that’s a PowerPoint presentation, group discussion, small group activities, there’s a lot of things that we can do through the technology that’s available at RMIT. And in many ways, that has made it a lot easier. And I have to say, I’ve quite enjoyed my online classes, there’s a lot to learn along the way.

As a coordinator, what are the differences in the challenges you would normally face compared to now?

It is more difficult to stay in touch, in a face to face situation it’s possible for me to be walking around, to be chatting to students when I see them in the corridor, etc. Maintaining that sense of how students are travelling and maintaining a connection with them is harder, but it’s a matter of adjusting and coming up with new things. To personalise things, I’ve been making short videos to send to the students that are just encouraging, asking them to get in touch if they’re having any problems. Teachers are finding new ways to communicate with me if they have any concerns about students.

How have your students adapted to the change?

It varies quite a bit, not all of the students are in home circumstances that lend themselves well to remote learning. I’ve spoken to a lot of different students, especially those in large families. There was a girl that I was speaking to the other day, she’s 18, and she has six siblings who are all at home. It’s hard to imagine what that’s like, there’s not much we can do to help them, besides being encouraging and supportive. I’ve also spoken to another student who has found it really easy, it’s been a very positive thing, because she’s been closer to her family then she has been in a long time so she’s enjoyed all the extra time at home. It’s certainly challenging for some students, especially those who are financially disadvantaged or have a lot of family members all home at the same time. It becomes harder to study, focus and, concentrate.

What are some of the challenges and opportunities that present themselves when working from home?

With online classes, it’s a little harder, you can have 20 students there and you can see them participating, but you have to make more of an effort to touch base and to connect with them so that they’re not just tuning in with their video or audio off. Making sure you can connect with them, so there’s at least a little bit of interaction. Otherwise, it could be really isolating, to be tuning into a class and then never getting social interaction. I’m [also] aware of the importance of connecting personally with the students, I try to do that every class. But that’s challenging, because some people don’t want to turn their video on, and that’s fair enough, they just want to listen or leave comments in the chat. They don’t want to interact.

How are teachers in the Urban School Program changing how they mark to better support students facing difficulties in online learning?

Instead of changing how we mark, it’s more how the assessments are organised. Students still have to demonstrate the outcomes in order to get an S [satisfactory] for a piece of work. Some of the SAC’s are made shorter, they don’t go for an hour and a half, there are fewer questions, so it might only be a 40 minute SAC or a longer SAC will be split in two, or they could be given extra time. There are things that VCAA have recommended, and these are all in how the SACs are administered rather than how they’re assessed.

For any VCE students reading this article, what do you want them to know?

I would want someone who is a VCE student to know that VCAA is going to a lot of trouble to minimise the disadvantage to students. They should feel encouraged to keep on studying. If they can keep studying, it should get easier as the year goes on, because VCAA has made changes to the Unit 4 curriculum. They’re still hoping to run the exams at the end of the year but not until December, there are lots of things in place to minimise the disadvantage to students from this whole experience.

At the time of writing, VCAA was considering holding exams in December, however this morning, they announced exams will be held in November.

Article: Imogen Howell is a second-year Media and Communications student (Journalism) at La Trobe University. You can follow her on Twitter @Imogen_Howell