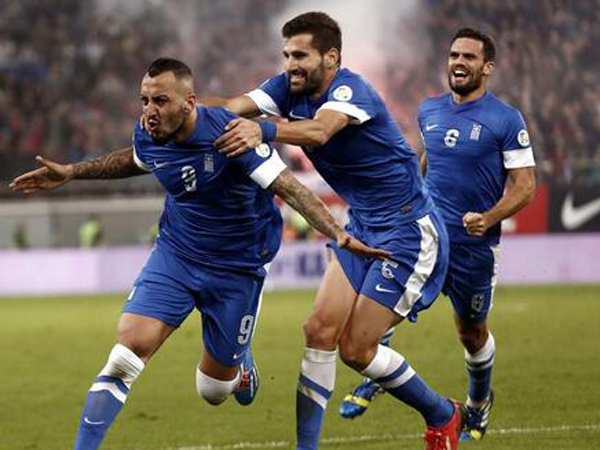 Fernando Santos announced Greece’s final 23-man squad on Tuesday morning, with Kostas Mitroglou still holding his place after an ill-fated start to his career with Fulham.

Mitroglou suffered a knee injury in Olympiacos’ 2-1 Champions League defeat to Paris Saint-Germain in November, keeping him on the sidelines for a month prior to his £12 million transfer Fulham. As a result, the striker made only one start for the recently-relegated Fulham throughout the second half of the season.

Mitroglou played a pivotal role in Greece’s qualifying playoff against Romania, scoring three of their four goals, which they won 4-2 on aggregate.

Prior to his transfer to Fulham, Mitroglou dominated in the Greek Super League, scoring 17 goals from 19 appearances for the eventual league champions, Olympiacos.

Santos went for experience with his final squad having selected Mitroglou’s teammate at Fulham and Greek captain, Giorgos Karagounis, as well as Georgios Samaras, Theofanis Gekas and Dimitris Salpingidis, who all played in Greece’s heroic Euro 2004-winning side.

Karagounis, who turned 37 in March, is the oldest player in the squad, but remains one of the most influential. The midfielder is a natural leader, consistently helping out his teammates on the field with his creative and incredibly accurate passing skills.

Santos has retained the defensive mindset of former Greece manager Otto Rehaagel and it is evident in his World Cup squad selection. He has gone with the likes of Sokratis Papastathopoulos and Vagelis Moras, who are able to maintain defensive pressure, much to the frustration of opposition managers.

During the qualifying stages, Santos had made some minor changes to his team’s formation. There was a lot more rotation in their attack as opposed to having one central striker, however the focus was still very much on maintaining defensive stability.

Greece is set to play some highly attacking sides in Group C. Santos’s tactics will therefore be advantageous for their matches against Ivory Coast and Columbia.

The Greeks’ chances of qualifying for the round of 16 rely heavily on their ability to stop the likes of Didier Drogba and Radamel Falcao, to who Ivory Coast and Columbia rely upon to score the majority of their goals.

Greece is also set to face Japan in Group C, which will be another tough contest for Santos’s side. Japan’s unrelenting intensity has proved the backbone of their success and this could become a real challenge for Greece if they go a goal behind early and continue to play with one central striker.

Greece’s lack of attacking options could be their demise in this group. Yes, they may be able to stop their opponents from scoring heavily against them, but they also need to be able to deliver up forward to establish a significant goal difference within their group.

Greece has only scored two goals in six World Cup matches and they have never progressed past the group stage. In a tight group, the goal difference will be a major factor in determining who qualifies for the round of 16 and this is the area Greece will need to work on to achieve progression.

Elsewhere, domestic stars Dimitris Papadopoulos and Stefanos Athanasiadis were unfortunate to be left out of the final squad after having stellar seasons for their respective sides.

Australian-born Avraam Papadopoulos was also unlucky to miss out due to injury.

Greece is set to play friendlies against Portugal, Nigeria and Bolivia before they travel to Brazil. This is Santos’s final chance to test further rotation within his attack so his side can go one better in Brazil.

Ellen Roumeliotis is a third-year Bachelor of Sport Journalism student at La Trobe University. You can follow her on Twitter: @EllenRoumie.