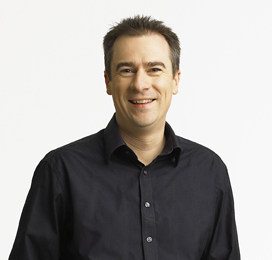 There are few sports broadcasters more respected than Gerard Whateley.

The award-winning journalist has worked in the media for the last 20 years, holding many positions ranging from film writer at the Herald Sun, to senior sports reporter at Channel Ten, and chief reporter at Seven News.

And now, he’s working in what he describes as his ‘dream job’.

‘I get paid to talk about sport all day, every day,’ Whateley tells me during our meeting in the foyer of the ABC building in Southbank.

Whateley currently headlines Melbourne’s Grandstand Sport on the ABC, calling a number of events, including the Melbourne Cup, the Australian Open, as well as AFL and A-League games to mention but a few.

He is also a weekly panelist on ABC1’s sports analysis program, Offsiders, and co-hosts Fox Sports’ version of the odd couple with Mark Robinson on AFL 360. On Sunday nights, Whateley partakes in the unscripted madness of After the Bounce with Jason Dunstall, Danny Frawley and Damien Fleming.

Whateley’s passion for sports was nurtured by his father from an early age. He and his father would watch football, cricket and horse racing on most weekends. On one of their regular visits to the football, Whateley’s father said to him: ‘Imagine if they paid you to be here.’  Little could he have known that his words would inspire Whateley to follow a career in sports journalism.

Throughout his final year of high school, Whateley was uncertain as to whether to pursue law or journalism. The decision was made for him when he was offered a cadetship by the Herald Sun before university placements were released.

Like most journalism cadets, he covered the courts, state politics and police rounds. The latter involved driving around the city in the early hours of the morning with a police scanner searching for news.

‘When I started [at the Herald Sun] I was 18, I didn’t have my license… I was a kid,’ Whateley says. ‘It was a great way to learn. I owe the Herald Sun cadetship program a real debt for setting me up in the industry.’

After two years as a cadet, Whateley became the paper’s film writer, before being appointed as the editor of HIT magazine.

With his father’s words in the back of his mind, Whateley would often write sports features for the Sunday Herald Sun on his days off. His hard work didn’t go unnoticed, with Channel Ten offering him a full-time position as the network’s senior sports reporter in 1999.

After his first year at Channel Ten, Whateley was named the Young Journalist of the Year at the Melbourne Press Club’s Quill Awards for an investigation that revealed a wanted US criminal had lied to enter Australia to win a Melbourne radio station’s Valentine’s Day competition.  For Whateley, the award confirmed he was on the right track.

Whateley is humbled when I suggest that he too is an inspiration for many young and emerging journalists.

‘That’s both flattering and daunting,’ he says with a chuckle. ‘I guess having been in that position where you look for role models, you want to choose good ones, and then I suppose you want to be a good one for anyone that chooses to look in your direction.’

It is no accident that Whateley is highly respected amongst journalists and the public, which he has earned through years of paying meticulous attention to detail and operating with the highest of journalistic integrity.

‘I think particularly for journalists who don’t have a sporting background in this field, all you have is your reputation and I guard my reputation jealously,’ says Whateley. ‘I only air stories that I know to be facts. My main plank is never be wrong, and don’t even be wrong partially within a story, and I adhere to that firmly.’

But this doesn’t preclude him from having strong and sometimes controversial opinions. He has written many forthright articles for the ABC’s The Drum on the Australian cricket team, jumps horse racing and more recently on Ross Lyon’s defection from St Kilda to Fremantle.

In an industry flooded with ex-players, Whateley has managed to establish himself as one of the best AFL broadcasters on radio. He disagrees with the underlying belief, held by some, that only ex-players are qualified to have opinions on sport.

‘To take the view that only those that have played the sport are entitled to have an opinion on it, is a poorly formed thought and if you actually think through to its end it just doesn’t make any sense,’ Whateley argues. ‘There needs to be a level of analysis and scrutiny from outside the game, from outside the locker room culture applied to all sport. It’s long been legitimate, but more than that, it’s actually essential.’

This includes female journalists, who according to Whateley have a ‘great take on sport’. He is an unabashed fan of Emma Quayle, Samantha Lane, Caroline Wilson and Kelli Underwood and believes the sporting landscape is all the better for their contributions.

Tomorrow, Whateley will be paid to call yet another AFL grand final for the ABC, continuing to live out the suggestion his father made to him all those years ago while watching a game of football.

Whateley’s passion for sports and his unashamed love for his job shone through during our one-hour chat.

He’s living a childhood dream, and it couldn’t have happened to a more deserving bloke.

Jonathan Wilkinson is studying the Graduate Diploma of Journalism at La Trobe University and is the current deputy editor of upstart. You’ll find him on Twitter: @JonoWilkinson