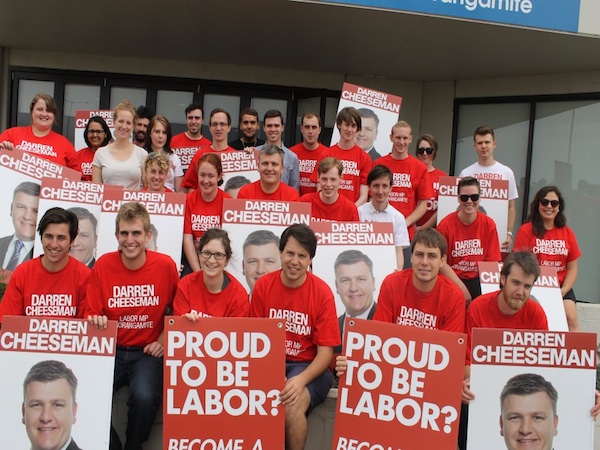 Ten days after the final ballot was cast in the 2010 federal election, our nation was staring down the barrel of its first hung federal parliament in 70 years.

Meanwhile in the electorate of Corangamite, located west of Geelong in southern Victoria, over 6000 votes were still to be counted.

The hopes of the Gillard government rested on the 34-year-old shoulders of Labor candidate and Member for Corangamite Darren Cheeseman. However, by that stage he too was resigned to waiting on a verdict.

Mr. Cheeseman’s positive demeanour and faith that his hard work would pay off eased the pressure considerably.

“I spent a lot of the week counting ballots and taking calls from worried people,” he says. “As the week went on I became more confident I would hold the seat.”

Three years earlier in 2007, Mr Cheeseman became the first Labor member elected to represent Corangamite in Canberra since 1931, earning a 6.6% swing at the hands of the Howard government’s unpopular WorkChoices policy.

The now 36-year old husband and father of young sons is chasing his third term in office and another opportunity to further develop his electorate, which stretches from Skipton in the north to Port Campbell in the south.

Unfortunately for Cheeseman’s prospects, the Labor Party has been well and truly on the nose of the political landscape for over a year now, meaning seeking re-election in a hotly contested Corangamite won’t be a cakewalk.

“Corangamite is the most marginal seat in the country,” says Cheeseman. “It has at least 5 or 6 distinctly different regions with their own issues.”

The policies which may decide Labor’s fate are the Carbon Tax, immigration policies, reallocation of funding for education at all levels and the National Broadband Network.

Mr Cheeseman alludes to education and the NBN as the issues with the most gravitas for Corangamite. He wants to focus on reform that will carry Australia forward, starting with his own electorate.

“If we can help our next generation of Australians have a great education we can avoid much disadvantage and costs of supporting people later in life. There is no better investment than in education,” he says.

It is a simple philosophy in theory and Mr Cheeseman implores Australians to support the Labor Party’s plight.

“[Labor will deliver] a massive increase in funding for our schools with the bulk of the new money going to schools with the highest needs.  Victoria would get $4 billion extra under the Gonski reforms.  There is a critical need to have equality in opportunity. The new funds will make sure students with the greatest need get extra resources,” he continues.

The NBN may be the feather in Labor’s cap providing it with an opportunity to retain power in Canberra.

“I think it is simple as the difference between copper and fibre.  What connection would you want at your door front?” asks Cheeseman. “Labor’s plan for NBN will deliver the best data speeds in the world at a fixed price.  It will deliver fibre to the home for 93 per cent of the population.”

Corangamite needs the NBN for business, education and health care.

Mr Cheeseman says: “The implications are huge for everyone in this area. We have a lot of regional businesses that would be able to compete with the NBN. It would help our local schools link in with schools in the region also.

“It could save us huge sums of money by linking patients with their doctors for online consultations. If it helps 5 per cent of older people stay in their home for one extra year it would cover the whole cost of the NBN. It would save $60 billion over ten years.”.

“I believe the whole nation is excited by the NBN, other than the Liberals who want a cheap fix to pretend they have a NBN policy,” he says.

Despite the Coalition’s rather passive attitude toward outlining policies so far this election campaign, Julia Gillard and her Labor government have their backs to the wall following a tumultuous term in office. Is Cheeseman concerned about his own prospects of retaining office?

“Antony Green said at the last election I would be the first to go, I am used to the pressure of holding this seat.”

Let us hope for Darren Cheeseman’s sake that regardless of the result, it doesn’t take 10 days.

Justin Falconer is a second-year Bachelor of Journalism (Sport) student at La Trobe University. You can follow him  @jfalconer6.