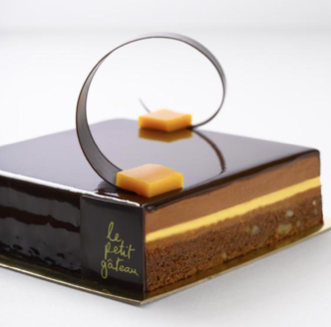 For any dessert lover, the very sight of anything dipped, topped or glazed in chocolate sets off an uncanny, instinctual response; a hunger that can only be satisfied by savoring a tasty treat.

No one understands this better than Melbourne-based Pastry Chef Pierrick Boyer, who knows exactly why people love desserts.

‘It’s the sweet tooth first, of course, but then it is the memory of that dessert that makes it more likely for you to come back for more,’ he says. ‘Dessert is comfort food.’

Growing up next to a pastry shop in France, Boyer became infatuated with sweets at the age of five. Since then, his life-long love affair with pastries has taken him all over the world to cook for the best establishments, alongside some of the greatest chefs. 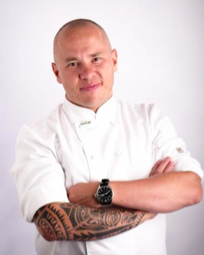 Now settled in Melbourne, Boyer is the executive pastry chef of Le Petit Gateau, owned by the RACV Club, where he is producing the best cake in town, according to the 2011 Foodies’ Guide to Melbourne.

‘If cake is your passion then don’t miss this extraordinary new creation at Le Petit Gateau,’ the guide says of Boyer’s chocolate, peanut butter and raspberry sandwich cake. ‘There is none better.’

Boyer knows that the appearance of sweets is a major factor to their appeal. Delicious and beautiful, Boyer’s desserts are miniature works of art that combine the down-to-earth flavours of French pastry, with the clean design of modern architecture. Boyer’s unique design elements make his desserts look like they are delicious (and they are!).

‘A dessert is first what you see,’ explains Boyer. ‘I always try to do something that I haven’t seen before. I don’t like to copy and paste; it’s not me. I want to be known for doing something different.’

The designs of his pastries are like that of no one else—who can resist his desserts featuring shiny black glaze, specks of gold and picturesque swirls of chocolate?

But it’s not just the look and taste of desserts that have us hooked, it’s the feeling we get from eating them, according to Boyer. Experience is a large part of the overall aim when creating his dishes. Boyer often strives to capture a particular experience or feeling in his culinary creations.

‘I want everyone to be happy, to enjoy it, be laid-back and have a good time,’ he says.

And really, what is there not to be happy about? Boyer’s cakes are made with all-natural ingredients, no preservatives or chemicals, so his customers can have their cake and eat it, too.

Healthy ingredients and moderation are the keys to being able to keep on enjoying dessert, according to Boyer.

‘I want to change the perception that cake is fatty. If you eat in moderation and you choose the right, quality product, you can eat cake every night of the week if you want to.’

‘There will be some interesting flavors Saturday night,’ Boyer says. ‘Yuzu is not a flavor everyone knows, so the dish will be intriguing to many.’

If asked if he can imagine a world without dessert, Boyer’s answer is a definite ‘No.’ Luckily, with Boyer’s pastries, no one in Melbourne will have to go without dessert ever again.

Samantha Afetian is a Journalism student at La Trobe University, currently on exchange from San Diego State University, and a member of upstart’s editorial team.  You can follow her on Twitter: @Sam Afetian.