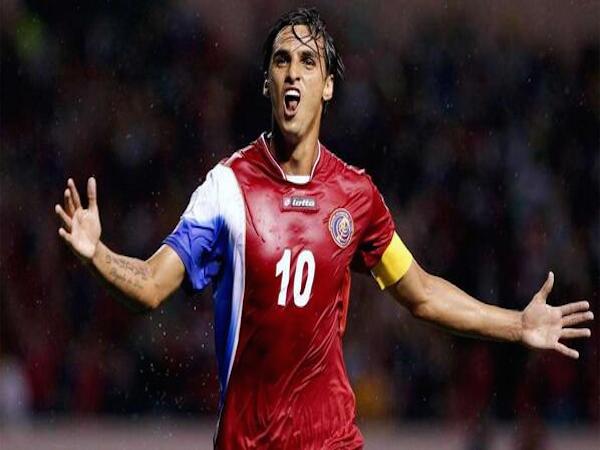 With the weight of expectation firmly rested on other countries, Costa Rica will look to be the surprise packet of Brazil 2014.

After securing second spot in CONCACAF qualifying behind the USA, Costa Rica were rewarded with a spot in the apparent ‘Group of Death’.

Solidity will be of utmost importance in a group that contains three World Cup winners: England, Italy and Uruguay. Head coach Jorge Luis Pinto has built his team with a somewhat pragmatic approach in order to achieve that.

The Colombian manager’s trusted formation is a 5-4-1 or a slightly modified 5-2-3. Costa Rica’s game will be predicated on protecting the three central defenders, while tasking the midfield triangle to orchestrate attacks.

Far from boasting real world class talent, any other tactical approach would almost be suicidal.

The Costa Rican squad descends upon the proverbial home of football from all corners of the globe – from local side Deportivo Saprissa to Russia’s Kuban Krasnodar. This team of unfancied jet setters can perhaps draw unity from exactly that.

Bryan Ruiz is very much the go-to man in a creative sense. The silky Fulham attacker, on loan at PSV, frustrates and entertains in equal measure, but has the potential to provide a real cutting edge. He will need to remain at his sharpest, however, as he is sure to be aggressively man-marked by the likes of Jordan Henderson and Claudio Marchisio throughout the tournament.

Alvario Saborio has been ruled out due to injury, while Bryan Oviedo could not complete a miraculous recovery in time after breaking his leg in early February.

Olympiakos starlet Joel Campbell will face the biggest test of his credentials to date, knowing all too well that the world’s biggest clubs will be watching, chequebook in hand.

Giant-killing is not unknown to this Campbell – the striker alerted Europe to his presence with a wonderful goal as the Greek side famously defeated Manchester United 2-0 in Pireaus.

The 2013 edition of the Copa Centroamericana saw Los Tico’s defeat fellow World Cup qualifiers Honduras in the final. Pinto’s side conceded one goal throughout – a 90th-minute equaliser in the group phase when top spot was already confirmed.

Structure was a strong-point of this side during World Cup qualification, too, with youth mixing with experience to great effect.

Cristian Gomboa is a player who was plucked from relative obscurity, but trusted by Pinto throughout, amassing 1,742 minutes in qualifying. The full-back plies his trade in Norway for Rosenborg and was extremely impressive in getting Costa Rica to this showpiece event.

With the attention that Campbell and Ruiz will receive further up the pitch – the speedster may be allowed to flourish in wide areas.

The Central Americans will need to take advantage of any opportunities afforded to them, while remaining calm in the face of serious periods of pressure that lie ahead.

Indiscipline shrouded Costa Rica’s most recent friendly and, subsequently, they are lucky to be able to call upon one of its star men. Central defender Giancarlo Gonzalez was sent off for an incident that left Republic of Ireland striker Kevin Doyle with a bloody nose. He will not serve suspension, however, which is a huge boost for a man widely considered the nation’s finest defender.

Gonzalez recently spoke of the quality within the squad.

“We know how to make the most of our attributes and we are also aware that we’ve got our weaknesses, though we’re looking to address them,” Gonzalez told FIFA.com. “We did a good job because we achieved what we set out to do, which was to reach the World Cup.

“We are going to give it our very best shot and we’re excited at the prospect of doing well in Brazil and doing our country proud.”

A date with Uruguay is on the horizon and with storms expected with humidity possibly reaching in excess of 80 per cent, the conditions may act as a ‘leveller’ of sorts.

Pinto’s side will look to repeat Costa Rica’s history-making effort of Italia 1990 – qualifying from a group containing Brazil, Sweden and Scotland.

It’s fair to say that qualification in Brazil would eclipse that by a fair distance, but the squad remains quietly confident and are happy to operate under the radar.

Chris Hearn is a second-year Bachelor of Journalism (Sport) student at La Trobe University. You can follow him on Twitter: @ChrisHearn08.