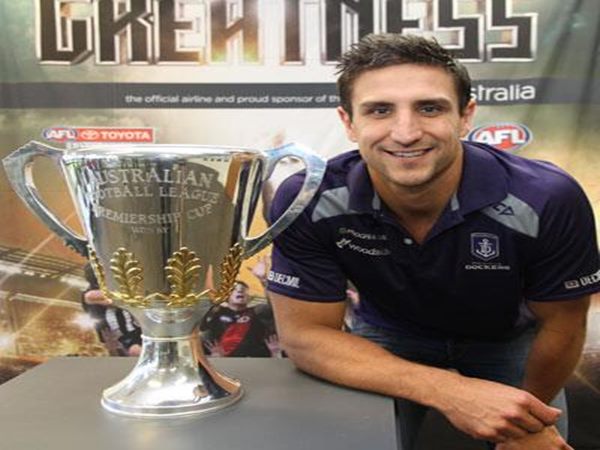 It is rare in this modern era of football that a player stays at the one club for their entire career, particularly now that free agency means that ridiculous amounts of money can be used to entice players to jump ship. But despite all the better offers that have come his way, Fremantle captain Matthew Pavlich has stuck it out, always fightining hard for the Dockers.

On the verge of playing 300 AFL games (289 currently), and on the cusp of Fremantle’s first Grand Final appearance after defeating Sydney in just their second preliminary finals match since the club’s inception, Pavlich will finally get a crack at the big one.

Pavlich made his debut in 2000 where he started as a fullback. Since then Fremantle’s power forward has helped his team slowly climb the rungs of the AFL ladder to be where there are today.

Despite only making the finals on a handful of occasions, Pavlich has remained loyal. Putting this in context, other teams like Melbourne have lost star recruits like Tom Scully after a couple of abysmal campaigns. For some when the times got tough, the tough got going to Greater Western Sydney where Scully now holds a vice captaincy. The move left the club reeling and Melbourne hasn’t fully recovered.

Imagine if Pavlich left Fremantle after a string of failures for finals footy. It’s highly unlikely they’d be in the position they are today.

In 2002 Pavlich was courted by Port Adelaide but decided to remain in Western Australia until the end of 2005. Port went on to win the flag in 2004, as Pavlich looked on knowing that he passed up a golden opportunity for greatness.

However, in 2007 Pavlich was once again targeted by Port Adelaide who had buckets of cash to lure the star forward across the Nullabor. But Pavlich knocked back the offer to return to his homeland, and instead signed an additional three season deal with the Dockers.

It looked like Pavlich was going to close out his playing years as one of the competition’s greatest players never to win a premiership. But after their grueling 25-point win against reigning premiers Sydney last weekend, Pavlich and Ross Lyon could be hoisting the cup higher than Aaron Sandilands in the middle of the MCG.

At a press-conference on Monday, Pavlich said opportunities to play in a grand final don’t come around often, which is why it’s important to approach this week with the right attitude.

“There are times throughout your career where you think you may not get opportunities that you really desire and that’s why this week handling it in the right way and preparing in the right manner is really important,” said Pavlich.

Pavlich believes Fremantle’s intense pressure around the footy will be key if the Dockers are to be successful come Saturday.

“We will be asking questions of Hawthorn with our defensive pressure all over the ground which hopefully they haven’t seen this year,” said Pavlich.

Coming into the twilight years of his AFL career, the 31-year-old may only get one shot at his dream. But his decision to remain in Perth despite all the turmoil might finally pay off, says Anthony Goodrich, Pavlich’s former coach at Sacred Heart College to the Weekly Times Messenger.

“It seems like it might be paying dividends – in footy terms it’s the ultimate dividend to lead a side into a grand final and perhaps be captain of a premiership team.”

Goodrich believes Pavlich’s loyalty serves as one of the greatest AFL success stories and inspiration to many aspiring footballers.

“It gives them an insight that it’s possible to make your way… I’m pretty sure the last grand final he played was here at school so they don’t come around all that often in people’s footy lives. He’s had to wait 14 years or so but it might well be worth it.”

Former St. Kilda coach Grant Thomas told Foxsports that under the guidance of Ross Lyon the Fremantle football club is no longer a one player team.

“Six or seven years ago, Pav would’ve been jumping on the bandwagon, trying to kick eight goals and do it himself. Now, he is the sort of player who gets as much enjoyment out of helping a teammate to succeed than him doing it himself”, said Thomas.

Fremantle’s game plan will be simple; Aaron Sandilands to dominate the ruck, Ryan Crowley to tag Sam Mitchell out of the game, which ensures that Lance Franklin is held within arm length. The ball will be dished off to Michael Barlow and Nathan Fyfe as often as possible in order for Hayden Ballantyne to do what he does and annoy and heckle the opposition up forward.

Alas, premiership cups are not deserved but they are earned and Pavlich will have to earn this prestigious honour despite his side’s underdog status. The Dockers will be fancying their chances after knocking off the team that was in their shoes last year, and if their form continues we could be seeing a new era of greatness out West.

Alas, premiership cups are not deserved, but they are earned and Pavlich will have to earn this prestigious honour despite his side’s underdog status. The Dockers will be fancying their chances after knocking off the team that was in their shoes last year, and if their form continues we could be seeing a new era of greatness out West.

Grant Roberts is a third year Bachelor of Journalism student at La Trobe University. You can follow him on Twitter via @GBRRD4L.