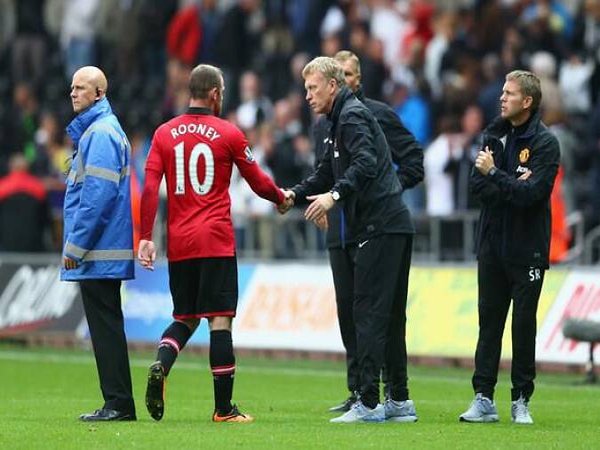 It is widely reported that Wayne Rooney is seeking an exit out of Manchester this summer – with his preferred destination being Chelsea.

Blues manager Jose Mourinho has publicly stated that he has high hopes of bringing the English forward to Stamford Bridge, affirming that in terms of his search for a striker, it’s Rooney or bust.

However, Manchester United boss David Moyes has taken a hard-line approach to Rooney’s alleged desire to depart, maintaining that the player is not for sale at any price.

While a statement like this can often simply be a shrewd invitation to provoke another club into offering a larger sum, Moyes’ proclamation seems genuine and indicative of a situation that goes far beyond a mere transfer fee.

The reality is, it matters little how much pressure Rooney may apply to engineer a move, or what amount will likely be offered for his services.

The simple truth is United cannot sell a player of his ilk to a rival club.

Not for any price and not under any conditions.

On one level it’s matter of pride; if the forward were to coerce his way out, it would be a painful admission that regardless of a club’s size, in the current financial climate a star-player is still more powerful.

From United’s perspective this is a particularly detrimental insinuation. Renowned as the most widely supported football club in the world and the second most valuable, if any player were to force United’s hand, its clout would be severely undermined and its reputation across the globe tarnished.

This is not an option.

But of almost equal importance is the fact that Rooney remains a supremely talented footballer. If the forward can be convinced his future lies in Manchester, he could be pivotal to the club’s domestic and European campaigns for years to come.

ESPN’s Manchester United Correspondent, Mark Payne, duly points this out, noting that while teams are usually happy to offload disloyal players, it’s a different kettle of fish this time around:

“In general, managers tend to try and clear out potential trouble makers. This scenario is slightly different in that selling Rooney to Chelsea would have an enormous effect in terms of message and psychology. To surrender one of your best players to a direct rival would be extremely self-defeating,” he said.

A banner at #Wembley “No one is bigger than the club but we still want @WayneRooney“. . . #ManUtdFansClass pic.twitter.com/JdlYeivLnU

As Payne alludes to, Rooney’s quality and history at Old Trafford makes him a particularly special case, notwithstanding United’s already rigid stance on negotiating with direct competitors.

The white Pele as he is affectionately referred to, has been at the club for nine years and is already within reach of long-standing records held by players firmly ingrained in its folklore. Most notably, he sits just 52-goals shy of Sir Bobby Charlton’s goal-scoring record.

Furthermore, at the age of 27, the Liverpudlian is a stage in his career where his best years may yet still be ahead of him.

From United’s point of view, it is vital that this next chapter in Rooney’s career is spent in a red shirt, not a blue one.

“If you look at the age profile of the squad, Rooney is quite possibly the most important player United will have over the next 5 years. They should be the peak seasons of his career and to get the best of them at Manchester United would be good news,” notes Payne.

Rooney’s discontent stems from a range of factors all seemingly occurring last season. A series of fitness issues coupled with Robin Van Persie’s arrival, resulted in the forward’s influence waning (pardon the pun) and some of his more emerging teammates staking their claim.

After being left out of the starting-line-up in a number of key fixtures, most notably a home tie against Real Madrid, Rooney found himself on the periphery of the first-team and disconsolate in the process.

It was an understandably disheartening period for a player who loves nothing more than minutes on the pitch.

Yet, however challenging the situation may seem and despite all the attention it has received, at the end of the day it appears a highly solvable dilemma.

Keeping Rooney in England’s Northwest may simply come down to being able to assure him regular first-team football, and a bit of affection along the way.

Acutely aware of this, United’s new manager has acted accordingly; despite being asked on numerous occasions to speak on Rooney’s behalf, Moyes has refrained from demonising the striker for wanting to leave, instead endorsing his qualities and his importance to United’s cause.

By doing so he has effectively left the door ajar for his former Everton pupil, in the hope that he comes to his senses and parity is restored.

The fact that Rooney has remained notoriously silent on the speculation thus far, neither publicly demanding the transfer nor denying, is encouraging to that end.

It is perhaps an indication that despite all the rumours, his mind may not actually be made up – that his new manager’s positivity may yet have had its desired effect.

A glimmer of hope subsequently remains that Rooney can be persuaded, not forced to be remain a red. As far as Manchester United and its supporters are concerned, it remains an outcome worth fighting for.

James Gray-Foster is a third-year Bachelor of Journalism student at La Trobe University. You can follow him on Twitter @JamesGrayFoster