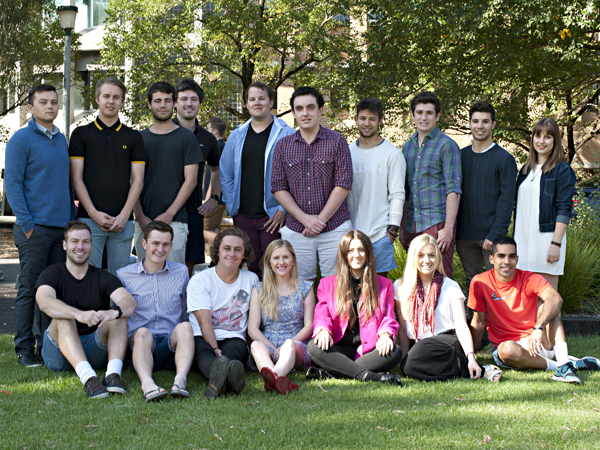 It’s the start of another semester and a new team of upstarteers has taken the helm of our publication.

Do read on to meet the team that will be running the show over the coming 12 weeks.

Matt Walsh plies his trade in the field of sport journalism. Most notably, he has been lucky enough to grace the grounds of Wimbledon twice, and has attended the Australian Open a number of times as a print and radio journalist. Two-time expat and full time travel geek, Matt has aspirations to become a travel writer or roving reporter, flying in and out of dangerous, interesting and hard-to-pronounce locations. You will sometimes find him brewing beer, sometimes taking pretty pictures, but you will always find him with an opinion on something. Follow him on Twitter: @MattWalshMedia.

Jacinta Newbold is currently completing the final year of her Bachelor of Journalism degree at La Trobe University. When she’s not reading up on the latest health and lifestyle trends, you can find Jacinta getting lost on campus or attempting to converse with others in French. Having recently travelled through Europe, Jacinta remains a huge fan of her country of origin, Australia, and hopes to one day in the not too distant future be a part of its media industry. Follow her on Twitter: @jacinta_newbold.

Riley Beveridge is a third year Bachelor of Sport Journalism student at La Trobe University. He has a deep passion for all sports, and football in particular. Riley lived in the UK and studied on exchange throughout 2013, and wrote for the football department of England’s No.1 regional newspaper The Liverpool Echo. A consistent contributor to upstart over the last three years, Riley is the incoming sport editor. You can follow him on Twitter: @RileyBev.

Jake Keating is a third year Bachelor of Sport Journalism student at La Trobe University. He is originally from a small country town called Tongala, situated in the north-east of Victoria. He is an avid sports lover and particularly enjoys following the AFL, Cricket, Tennis and American football, however he is always willing to watch any sporting contest. You can keep in touch with Jake on Twitter: @JKeats10.

Alice Piper is a third year Bachelor of Journalism student and the Lifestyle & Fashion Editor for upstart. Alice is a lover of all things fitness, fashion, cooking, reading, and AFL football. Alice’s goal in her professional career is to become a foreign correspondent, going wherever the news takes her. You can follow Alice on Twitter @PiperAlice.

Tom Colwell is in his fourth year of a Law/Media double degree at La Trobe University. He enjoys writing on a range of topics including politics, culture and international affairs. While Tom enjoys sport — and particularly NRL — he regularly admits to being “sport illiterate” in other areas. He is a keen traveller and hopes to pursue a career in either international law or broadcast journalism — or a combination of the two.

Sherydan Fitzgerald is in her final year of a Bachelor of Journalism at La Trobe University, and is currently completing an internship at LightFM, Melbourne. Sherydan grew up in the country town of Mildura, and moved to Melbourne in 2011 to achieve her tertiary education goals. Sherydan is a coffee, op shop and DIY enthusiast, and writes a blog featuring the few projects she has time to finish. She aspires to one day be a writer and news journalist. You can follow her on Twitter: @SherydanFitzger.

Campbell Elmer is currently in his third year of studying a Bachelor of Journalism at La Trobe University. His passion for journalism stems from a desire to see the world (and brag about it), having lived, attended school and worked in northern Melbourne his whole life. When Campbell isn’t slaving away over history essays and contributing to his thrilling political-analysis blog Pollywatch, he works as a swimming instructor and writes short stories. Ever the adrenaline junkie, Campbell’s dream job is to work as a foreign correspondent in a warzone. You can follow Campbell’s thoughts and endeavours on Twitter: @CampbellElmer.

Julian Gasparri is a third year Bachelor of Journalism student at La Trobe University. A muso at heart, he is pursuing his love for music as a journalist via several online publications, radio broadcasting, and even his own blog. With these platforms, he hopes to contribute to the growing awareness of Australia’s independent arts and culture. With an added interest in society, culture and travel, he aspires to become a travel journalist across both print and broadcast. You can follow him on Twitter: @JulianGasparri.

Joel Hargreaves is currently completing a Bachelor of Journalism degree. Growing up in the country town of Wangaratta, he moved to Melbourne in 2012 to follow his hopes of being a journalist. Joel has blogged for Optus as a Sound Scribe and currently contributes to the Australian Musician Network website. When Joel isn’t writing he is either listening to music or being an avid Carlton and Minnesota Timberwolves supporter. Follow him on Twitter: @joelphargreaves.

Justin Falconer moved from Sydney to Melbourne to pursue a degree at La Trobe University. Justin is completing his third and final year of a Bachelor of Journalism (Sport) degree in 2014 and will cover all things sport, and maybe a little extra, as a staff writer for upstart magazine. He hopes to one day have the opportunity to travel the world and cover sport for a living. You can follow him on Twitter at @jfalconer6.

Lauren Colosimo is a third year bachelor of journalism student at La Trobe University. She currently writes about the arts in Melbourne for the Melbourne Forum.

Lauren is obsessed with film, music and travel and hopes to pursue a career in broadcast journalism.

Liam O’Callaghan is in his last year of a Bachelor of Journalism degree at La Trobe University. He is an avid follower of sport in Australia and abroad, including Australian rules and American football. He has also been writing for the Northern Football league for two years. After a semester at the University of Oregon, Liam has developed a passion for travel and aspires to take his journalism career across the globe covering politics and conflict.

Luke Sale is in the final year of his Bachelor of Journalism (Sport) degree at La Trobe University. He made the move across the border from a journalism degree in Adelaide in 2012 and continues to enjoy the change. While an English and Australian football manic, his focus is also on AFL, cricket and travel writing. Luke regularly thanks fate for the FIFA World Cup falling in his last year of study and hopes to take his degree around the world post-2014.

Naim Kurt’s passion for writing and social issues that affect every day people, led him to enrol in a Bachelor of Journalism at La Trobe University. Growing up in the post-9/11-world has influenced Naim’s interest in domestic politics and international events, and he hopes to work in investigative or current affair programing in the future. Naim is dedicated to charity work and recently participated in the 2014 Ride to Cure Diabetes. On weekends you’ll usually find him cycling, or watching local games of soccer or Aussie rules depending on the season. You can follow him on Twitter: @nkur7.

Nick Schomburgk is a third-year Journalism (Sport) student at La Trobe University. He is passionate about all things sport and writes for thriving Ballarat newspaper The Courier, covering the Central Highlands Football League. Whether it is behind a microphone, in front of a camera or through the written word, Nick hopes to provide the upstart readership with unique and engaging content. You can follow him on Twitter @nickschomburgk.

Sean Munaweera is a third year Journalism (Sport) student at La Trobe University. He is very passionate about sport and its positive influence on society. Sean’s sporting highlight was being able to travel to the 2012 London Olympic Games and watch Usain Bolt successfully defend his 100m gold medal. He works at Tennis Australia as an MC/presenter, and was part of the production team during their Australian Open coverage. Sean is a diehard St. Kilda supporter and is hoping their next premiership is just around the corner.  That infamous bounce in the 2010 Grand Final still haunts him. You can follow him on Twitter: @sean_muna.