More than a thousand people gathered outside of the State Library of Victoria for the International Women’s Day rally. 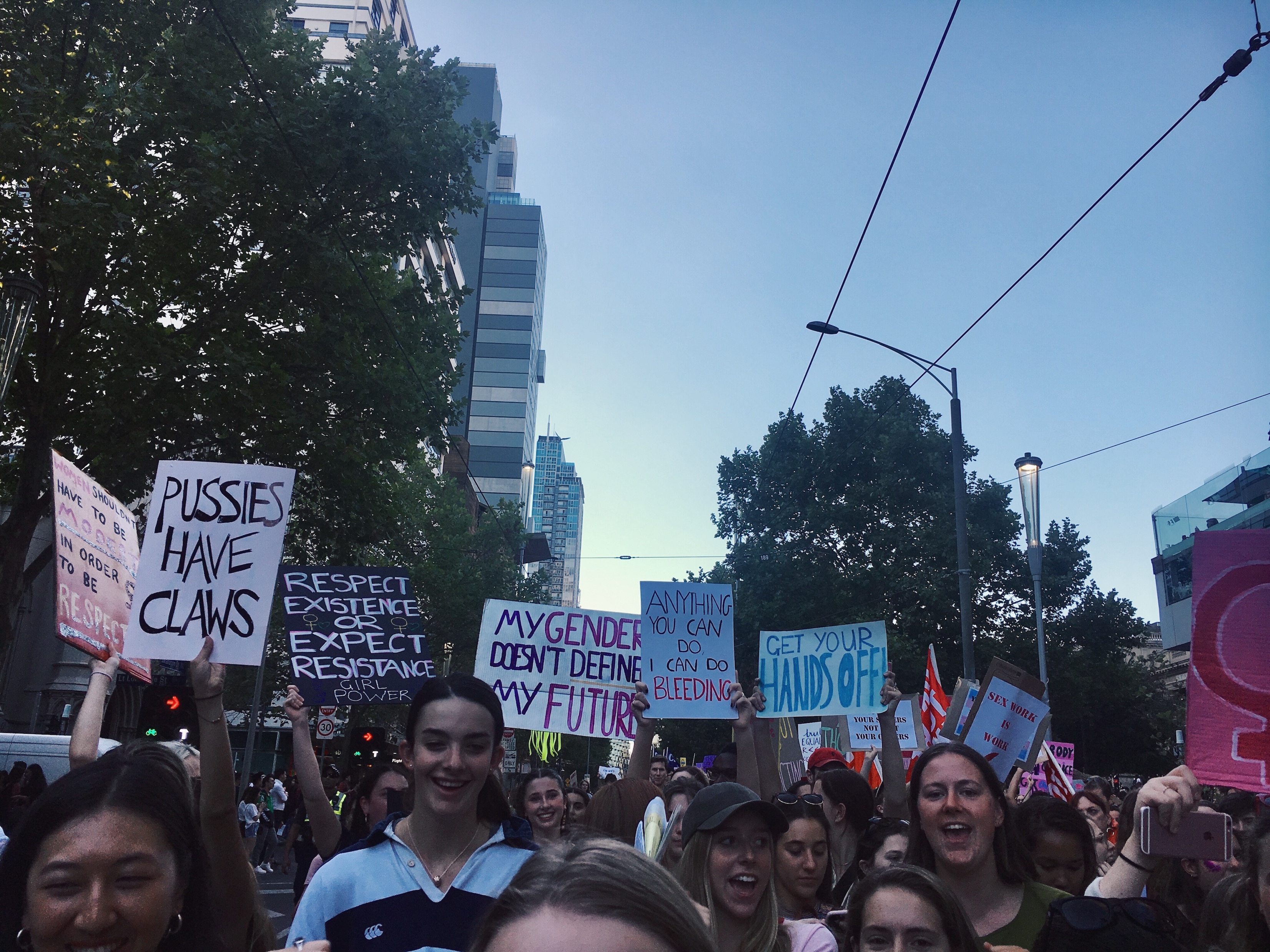 Michelle Obama once said “there is no limit to what we, as women, can accomplish.”

On the afternoon of Thursday 8 March, the steps outside of Victoria’s State Library buzzed with the sound of women accomplishing their goals as more than one thousand people gathered to celebrate International Women’s Day, slogan-emblazoned signs in hand.

Kate Crossin, the National Women’s Officer at the National Union of Students, was among the women rallying. She became involved in feminist and student movements when she started university.

“I wasn’t really exposed to a lot of these things when I was younger,” Crossin told upstart.

“Once I stepped into a place that forced me to talk about it, that’s what made me want to get involved and be a part of the voices standing up for inequality.”

Last year, the #MeToo movement brought the issue of sexual harassment against women into the spotlight.

Mich-Elle Myers, National Women’s Liaison Officer at the Maritime Union of Australia, spoke at the Melbourne rally. Myers told the crowd that the #MeToo movement should really be called “#AllOfUs.”

A national survey conducted by the Australian Human Rights Commission in 2017 revealed the prevalence of sexual harassment and assault at Australian universities.

Crossin says she rallies to stand up for these victims.

“They have a voice that’s just not being heard at the moment and they need someone to help platform their voices, and I’m rallying to make sure that they’re not forgotten in any of this,” she said.

“I also attend because I know that there are so many things yet to be won and I’m standing in solidarity with the people that are trying to win more things for future women.”

The 2018 theme for International Women’s Day was #PressforProgress, which called for gender parity across the globe. According to a report by the Australian Human Rights Commission, the average full-time weekly wage for a woman is 15.3 percent less than a man’s.

Ella Fabry, organiser at the Finance Sector Union, has marched in the International Women’s Day rally for five years. She believes that economic disparity between men and women is currently the biggest issue.

“I think our entire world is built off the unpaid labour of women, and that that’s not recognised enough,” Fabry said.

Amy Jenkins, Media and Communications Officer at the Health and Community Services Union, has been rallying on International Women’s Day since 2011.

On Thursday, Jenkins launched a portrait gallery to celebrate the women who make unions strong, before arriving at the library for a “day of sisterhood”.

“I look up to a lot of women in the union movement who are older than me,” she said.

“They have a brashness to them and an irreverence that is just required to survive.”

Jenkins believes that women must work together to bring about progress.

“I think there’s a lot of reasons to be angry and that rallying can be a good way to channel it,” she said.

“I think women’s work should be valued and I think that there’s just so much diversity to what it is to be a woman and that can be affected by race and sexuality and disability and all sorts of things.”

For Crossin, being a woman means having to fight to be taken seriously.

“I think being a woman at the moment means that I’m not equal,” she said.

International Women’s Day is a day of solidarity and celebration for many, including Fabry.

“It means that you stand with people when they’re under attack, and that you’re all fighting together to tear down the oppression that exists in society that holds you back,” she said.

Jenkins urges young women to learn about these issues and to trust their instincts.

“Just seek out answers, look up feminist blogs, ask those questions for yourself, meet people, learn things,” she said.

“If it doesn’t feel right then it’s probably not right and that applies to anything from career choices to sexual encounters.”

Such issues will continue to be discussed long after International Women’s Day.

Here are some upcoming events in Melbourne: