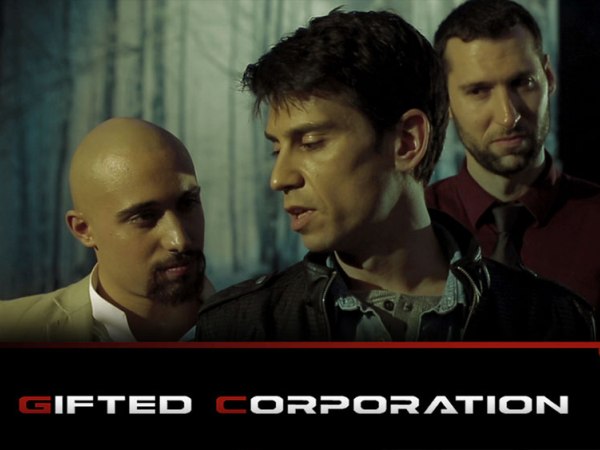 Sean and Silva guide us throughout the story, as they are trying to track down a mysterious coin killer; combining thriller, action, science fiction and fantasy, while meeting amazing new people on the way. People who are special, who are unique and who are gifted.

What (and/or who) inspired your series?
The person that made us believe in ourselves and introduced us to film was Patxi Urkijo, without him we would never have done any film at all. What inspired Gifted Corporation is the series we love, the characters we love, the scenes we love…

Why should people watch your series?
Because there are no boring moments, the editing and the pace is really quick and you will have to watch it twice to catch up with all the details.

In the first season you “experimented” with not having a budget, how did you fund this series?
This is an incredible project, because everything was crowdsourced including the shooting and producing, post producing etc, of the whole season cost less than 1500 euros. One should emphasize the huge contribution made by every person in the cast and crew, people who selflessly donated their time and expertise in order to create this web series.

Gifted Corporation was shot in Spain but the story takes place in the U.S, what were some of the challenges in making it look authentic?
The web series is shot in Spain but takes place in the USA, which made everything more complex. We had to find American cars, in Bilbao… And we did! This was a challenge for every person in the team, but searching for locations and creating sets that looked like the United States was very hard work. The props, the wardrobe, the cars for the chase… everything had to simulate the American style, even locations like a police station, the pentagon, an antique store, a lake harbour, a parking lot… Moreover, there are over 40 locations throughout the seven episodes of the web series.
We had to find good actors that could also speak English; or natives who had never acted. The cast included people that had never acted before and did secondary roles, some of them even became protagonists of THREE episodes, including Emily Anne Kane, Carlos de las Muñecas, Alejandra Fernández (Ep. 2, 4, 5) The Latin accents were hard for most actors. The most challenging was the villain. It had to be an English accent with an Italian touch, performed by a Spanish person.

What’s the biggest challenge in making a transmedia series?
The transmedia aspect of a series is a great way to engage the audience and make them more interested. But it does not work too well for small products. The audience has to be VERY interested to see the rest of the story, to be interested enough to spend extra time researching the series’ universe. It is easy to make a Game of Thrones Transmedia, but it is hard to make an indie transmedia. The other tricky thing is that it takes a lot of time! There is a great tool, Conducttr, which we would want to use very soon, and helps the creators program some of the things that involve transmedia.

Rose, you are doing a PhD on web series. What’s your angle? Can you tell us a bit about your research?
I cannot disclose a lot of information about my thesis until it is published, which will be in a few months. What I can say is that it is going to be the “Bible of web series”, it will include most of the process involved with making web series, even festivals! Dozens of creators have also taken part directly, and when I have presented it, I will publish a Book with tips, and some information in a reduced format, in order to help creators.

As a content creator, where do you go to find information about other filmmakers and web series?
I mostly type it in Google’s little box and will go to the following pages: IMDB, Wikipedia, Facebook, Twitter, Some web series oriented pages such as web series channel.

What do you want audiences to take away from your series?
I want the audience to become excited by the characters and the story, and most of all, I want them to want more!

When are you completely satisfied with your work?
Never. I always try to do better. After 15 awards for Gifted Corporation, I still think I can do better…. and I will.