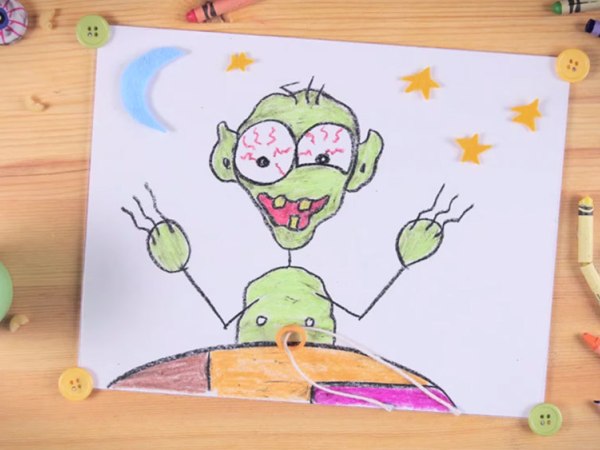 Vincent, who is from Montreal, Canada, chose a simple craft style animation for Lily Tells. Giving the viewer an alternate and somewhat paradoxical view on some very prominent stories and movies. This animated web series proves to be both humorous and entertaining.

How did you come up with some of the ideas for the mixed media animations?
The style of animation came naturally with the idea of the series. The moment I decided it would be a six-year-old girl narrating the episodes, the crayons and other craft materials came to my mind.

Lily Tells focuses on movies usually directed at adults but is told in a child-like way, what was your inspiration for this?
It came from a school project I had to make in 2011. The idea came while talking with some friends about what I should make for a 60 second animated short. There is this well known French-Canadian film about a young girl that was beaten to death by her mother-in-law at the turn of the century. We wondered how it would sound if it was told by a young girl, how she would interpret the drama of this story. Surprisingly, it sounded very funny! So I decided to make a series. It took a couple of years before I finally put the project together with Bruno Mercure, who helped me develop the series. The more serious the movie is, the funnier it gets.

Are there any web series, other than your own that inspire you?
There are a lot of very prolific web series here in Quebec. Projet-M is one of them. It is spectacular how they managed to make a very realistic sci-fi movie with such a small budget.

Describe the ultimate fan of your series?
There are two kinds of Lily Tells fans. The appeal of the reinterpretation of classic movies gathers the film geeks. And the character of Lily (or Camille as she is called in the french version) is one any mother of young kids can relate to.

What’s special or different about your series?
I think it’s the way we relate to Lily even if we never see her, and even if the episodes are very short. After a couple of episodes, we feel like we know her, and we want to hear more about her life, about what she thinks of the movies.

How many people worked on this project?
The first season was made by a team of 5 people. It was produced by Bruno and me and we made everything ourselves. We just completed the second season that was produced in association with Attraction Images, a major Montreal-based production company, so the team just got bigger!

Have you achieved the goals you set for this series?
We achieved a lot more than what we expected. Since the first season, we’ve been financed and broadcasted for a second and third season by the national broadcaster.

What’s your background as a content creator? And how did you approach this project?
I studied cinema at the university here in Montreal. I directed a couple of narrative short films and web series before working on animated projects. I’m a movie geek, a man-child, a storyteller, so I managed to create the perfect project for me!

What was the most difficult challenge you had to overcome in production, and how did you go about it?
Everything was pretty easy during production. Our only concern was that we make the best episodes we could, without repeating ourselves. We had the chance to be financed, so we can take all the time we want to produce the series without having to worry about money.