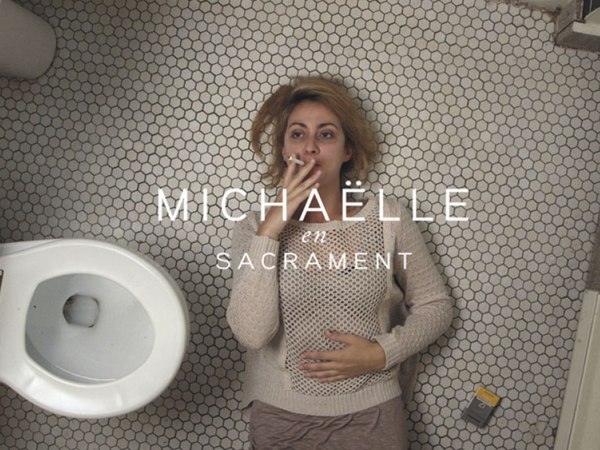 Michaëlle is forced to look after her grandmother (and her cat) after the pair were unexpectedly dropped off at her doorstep. She soon learns that her grandmother is suffering from early onset of Alzheimer’s. Michaëlle is now faced with the task of learning, alongside her grandmother, how to overcome the discomfort of the often misunderstood disease.

This series discusses early onset Alzheimer’s, in doing this, what were you aiming to evoke within your audience?
We had this idea about doing a drama-comedy about Alzheimer’s. We knew it was not an easy thing to talk about. At first, we were tired of only seeing drama’s being made about this illness. Frédérique (the producer) came up with the original idea of having a young woman who is forced to stay with her grandmother who is suffering from the Alzheimer’s disease. Once, she tried to play scrabble with her… It turns out to be a really bad idea. So that became the starting point of the brainstorming.

What (and/or who) inspired your series?
Frédérique’s grandmother was a big source of inspiration. Then, we brainstormed a lot. Most of the time we drank wine and we made dinner at my place. It was an intensive process where we would see each other at least 3 times a week during many weeks.

Hervé, you originally started out as a documentary filmmaker, what got you onto producing content for the web?
We wanted to make this idea happen for real, and TV5 funds were giving us the opportunity of having a small budget to make it. Frédérique and Christine liked the style of my previous films. We also discovered that web series was a better way to show your content to the world. We wouldn’t have had the same visibility if Michaëlle was made as a short film. It just wouldn’t have the same amount of viewers. Winning the Grand Jury Prize at Marseille Webfest in 2014 gave us enormous visibility. Many financiers got interested in making season II come to life! We are working on it right now.

You recently shot at the YouTube Studios in LA, can you tell us about your next projects?
This was not one of my own projects. I was a production consultant on this web series called Gods & Secrets, my friends Adi Shankar and Justin Smith were producing it. I met Adi at Marseille, he was part of the jury, once the festival was done he said he liked my work and wanted to work with me. We hadn’t had any opportunity to work together since this project came up. He wanted me to be a third pair of eyes on the project. Shooting in studio always amazes me. It was also a great learning experience for me; I studied how they were making it the American way! YouTube space is a great place to shoot. I hope I can shoot one of my project there someday. They have a fancy barista who makes really good coffee. There is nothing I can appreciate more than walking in a big studio with a latte in my hand.

What was the biggest challenge you had to overcome making this series?
The most difficult thing was to make the entire series with a very tiny budget. Thankfully, we have a lot of friends. I think that everyone on the crew really liked the idea of the series. We also chose every crewmember very carefully. Creating a team that will enjoy working together and will give their best everyday to make it the best series; it is not an easy thing, but I think we succeeded.

How do you reach your audience?
We don’t think about it too much. My job is to deliver the highest quality (both artistically, and technically) QuickTime file I can ever do. Once this is done, I try not to be involved too much in the process. I’m definitely part of sending the finished product to festivals, and if some channel wants to buy our series, we are going to discuss the terms all together.

How do you finance your series?
TV5 funds gave us the money to make it happen. I just got another grant from TV5 to make another original series. It’s called L’écrivain public (The scribe or The public writer). We are also waiting to see if we can get funding from the Production Independent Funds (PIF), who can give us enough money to make five extra episodes.

When are you completely satisfied with your work?
I’m never completely satisfied with my work. There is always something I can do better. I just need to surf on another project at some point. I always try to have a lot of different projects going on. I always try to travel with my work. It’s part of the inspiration process. I need to move, I need to experience new things, meet new people. I’m always ready to experience some crazy adventure. The last 6-7 years has been completely crazy for me. Every day in a while, I take a short amount of time where I realise how good and interesting my life is. I feel very lucky about everything that is happening to me.

Are there any web series, other than your own that inspire you?
My friend Adi Shankar, made an animated web series called Judged Dredd. It’s dark, extremely violent, totally addictive. I liked it very much. Other than that, there is an old Montreal web series that makes me laugh a lot that is called The bitter end. Anglos from Montréal makes the best comedies.