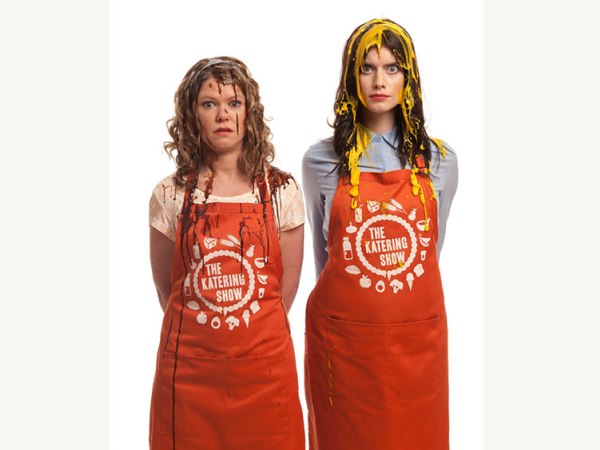 Who is the most influential food chef/celebrity in your lives, and why?
McC & McL: Maggie Beer. We just want to nuzzle into her chambray-clad bosom and stay safe from the world.

Which fad diets are you currently experimenting with?
McC & McL: We don’t do diets or fad diets but we are big fans of fads in general; like brushing our teeth with toothpaste and recreational breastfeeding.

What do you want audiences to take away from your series?
McC & McL: An overwhelming desire to pour themselves a glass of wine, judging by the late night response from our fans we’ve achieved this goal quite a lot (See photos of naked TKS fans wearing aprons and holding chainsaws).

What was the biggest challenge you had to overcome making this series?
McC & McL: Digesting the on-set catering.

How do you reach your audience?
Tam – The series screens through the rather popular globally accessible and free platform YouTube and we also engage with our audience through the social media platforms Facebook, Twitter and Instagram. Shares, tweets, likes and comments through social media have been a big part of how our series was able to reach such a huge audience. During the launch of the series we ran a campaign to reach our audience through targeted marketing on YouTube, Facebook and Reddit in tandem with a press campaign that included radio, print and television interviews.

How did you finance your series?
Tam – We received 75% of our funding through Screen Australia’s Multi-platform program.

Is your series an ongoing project? If so can you give us some clues about what comes next?Tam – We are currently locking away financing for series 2 – subscribe to our YouTube channel and social media for updates.

Have you achieved the goals you set for this series?
Tam – Our goals in making the series were two fold; firstly to increase our profiles as creators, and in turn our opportunities for development for this and other projects, and secondly to develop our skills and knowledge through the process of making and distributing the series.
The hugely positive response to the series has blown us away, we had set our sights on hundreds of thousands of views and instead we are well into the millions with fans in all corners of the world. The opportunities that are arising off the back of that success are something we will not take for granted.
And the amount we have learnt through the process is invaluable, creating and distributing a web series is a huge undertaking and as emerging creators it is a fantastic stepping-stone to producing larger scale projects.

Your series ‘Bleak’ won the iView award at Melbourne WebFest 2014, in addition to the awards for Best Actor and Best Screenwriting. But the series never made it onto iView. We understand it’s being developed into a TV series? Can you give us an update on that?
McC & McL: No. It’s top secret and if we reveal any details of our development deal we’d have all five of our balls chopped off. Literally AND figuratively.

What’s your background as a content creator? And how did you approach this project differently to previous projects?
Tam – We went into creating The Katering Show with a different set of goals than we had for Bleak. Bleak was a proof of concept for a series, and hence it was about making the episodes the best they could be and having it seen by those who could help take it to the next level, The Katering Show was always created with its online distribution as the end game, so it was not only about making it the best series it could be, it was equally important that it was backed up by a marketing and distribution plan that would ensure it wouldn’t get lost amongst the millions of videos uploaded each day. Whilst in terms of the process of shooting the series itself that didn’t greatly change our approach it did add a whole new step to the process. We were never in any doubt of our skills in terms of creating the series (although it was a step up in terms of budget and length), but we knew we were entering a brave new world with the marketing and distribution of the project. That meant doing lots of research, getting advice from experts, putting a lot of time into creating content for the different platforms, and engaging experienced people who could work with us to make sure that our show would be given the best chance of success we could give it.