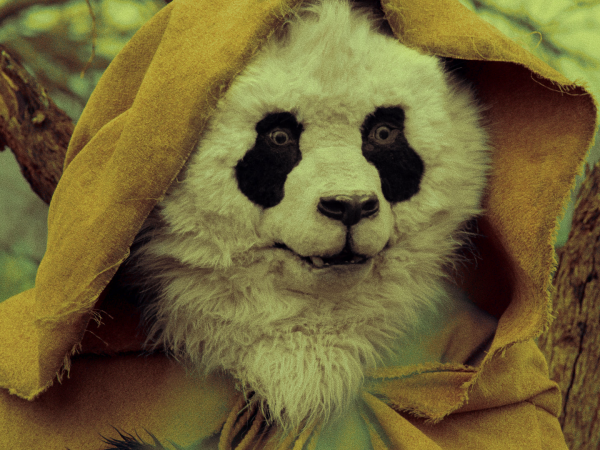 Filmed in South Australia, Wastelander Panda follows a desperate panda as he aligns himself with the Helm Clan, a family of people smugglers, in order to seek a replacement child and reinstate his family back into the Tribe.

Produced by Kirsty Stark and Nick Batzias and directed by Victoria Cocks, this post-apocalyptic drama makes for one-of-a-kind viewing.

Tell us about the inspiration behind the concept. Why is there a panda roaming around the Australian outback?
The inspiration for the project came from a mixture of video games and a joke. Fallout 3 is my favourite video game ever and at the time I was playing it I was massively inspired to design and create my own world, full of as many characters and environments as possible. I started talking to co-creator Marcus McKenzie about it one day and he came up with the idea of the panda. Together we started writing about this panda walking around a post-apocalyptic world and it had this ‘Escape from LA’ vibe, just kinda badass but cheesy and ridiculous. Yet the more we started working on it the more serious it got and the whole premise and genre of, what went onto become Wastelander Panda, became really dark in tone and drama. We went down the path of The Road and Fallout in the end, which was definitely the way to go.

It’s also not the Australian outback to us, it’s another world in a different time and space and that is how people from that part of the world simply speak.

Why should people watch your series?
It’s about a panda in a post-apocalyptic Wasteland, it’s live-action (not animated) and it’s drama (not comedy). You won’t find anything else like it online.

How do you reach your audience?
We have a number of different strategies in place, and our approach varied a lot between the first series and this one. Initially, the majority of our strategy was around approaching large websites and blogs that promoted similar content, so that they would share the content with their own readers and the episodes would hopefully go on to spread through viewers’ individual social media accounts. For this series, working in conjunction with the ABC marketing team and ABC iview, there was a lot more traditional promotion involved, such as press releases and media interviews. Overall, the best recommendation is to use the advantage of the internet and the fact that your series is accessible to the entire world, so focusing on international promotion and recognising that many Australian audiences now find their content on international sites. Essentially, think global!

What was the biggest challenge you had to overcome making this series?
Having to deal with a huge amount of new people overlooking the process. Originally it was pretty much just Kirsty and myself and a few people we consulted for feedback and advice but this time round we had multiple investors and it often felt like we were being told what to do by different people who didn’t always agree with each other, so it was like who am I supposed to listen to? Even though that wasn’t their objective it was just such a different way of doing things that it just came across to someone like me, with more inexperience, as being that way.

How do you finance your series?
Madman were the first people to approach us and suggested doing another web series, but this time one that formed a linear story. We then looked to bring a broadcaster onboard to give us a new platform for the series and a chance to find a wider audience and more funding. ABC iview commissioned six ten-minute episodes and both they and Madman invested in the development of the series, as well as the SAFC. Once we had these guys we applied for ‘Multi-platform Drama Funding’ from Screen Australia and were successful in our application.

What’s the magic formula for a successful web series?
I don’t know exactly, people like a lot of different approaches and ways of watching content. I’d say keep the episodes short if possible and we chose to release all episodes at once to encourage everyone who found an episode to watch the entire series. Don’t keep people waiting a week to watch the next episode or it will just get forgotten.

In what ways do you utilise social media to further your brand?
We used a lot of social media to get Wastelander Panda out there in the beginning. This time round is was more about keeping those fans interested and informed as much as possible. Of course Facebook and Twitter were the main forms of social media for us but we did start and Instagram account and a Tumblr so we could share photos during the filming process.

We also did a countdown to the release of the series using shots from the episodes that showed a variety of different characters, places and environments just so people could get a glimpse of what was to come and didn’t think it was all just pandas and desert.

Can you give us some clues about what comes next?
Wastelander Panda isn’t a traditional web series in that our aim is to eventually create a long form TV series from the concept, and our online series have been our approach to hopefully achieving that. We have the concept for the bigger series ready to go and are currently working on finding international finance to try to make that happen.

Meanwhile, a DVD of the Wastelander Panda: Exile series has just been released in Australia (on June 10th through Madman), and its paired with a graphic novel version of the series. It’s really exciting to see the story play out in a different format, and that will hopefully help us to find new fans for the web series.

What’s special or different about your series?
I think what’s different about the series it that it has the ability to make you care about something most people initially think of as a joke. A lot of feedback was about how the overall series was compassionate despite so much violence.

Also what I think is different about it is the way it deals with death. People don’t just die without any reference to how it makes others suffer. That’s something I think is really important. We kill off people all the time in movies and TV and people have become pretty desensitised to the actual idea of death, which to me is very sad.

Are there any webseries, other than your own that inspire you?
I loved the Mortal Kombat webseries aswell as all the Assassins Creed stuff.