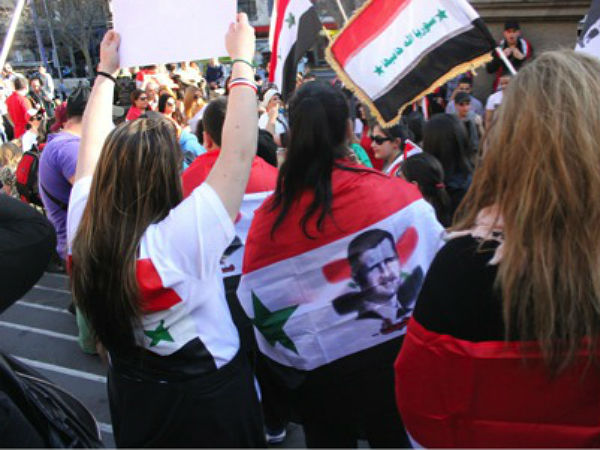 Despite losing support from traditional allies in recent days, the US is preparing to strike the Middle Eastern nation, as outlined by Obama in an impassioned press conference. From a US perspective, the decision has been made. However, the Syrian community in Melbourne believes the US should keep their “hands off Syria”.

That was the message at Saturday’s rally in Melbourne. Taking place on the steps of the Victoria State Library, people stood for two hours listening to speakers discuss the current situation in Syria. Some read poems, some reasoned America’s motives in the region, and others advocated voting for the WikiLeaks Party in next week’s elections. In between, and sometimes during, there was enthusiastic chanting. Towards the end, with music blaring, a few even started to dance.

The police stood at the edges, welcome, but not needed. This was a family event. Children played on the grass or by the columns of the library. Some had Syrian flags painted on their cheeks and held signs that said “Hands off Syria”. Families socialised and chatted, waving their Syrian flags with pride and holding up signs of their own.

The atmosphere was friendly and lively. It was almost possible to forget the reason for the gathering and get lost in all the enthusiasm.

“I[‘d] like anyone here who has a family member  – a brother, a father, a cousin, a relative  – in the Syrian army to put their hands up,” asked one of the speakers. Nearly everyone reached for the sky. This is not just another war fought on a battlefield half a world away, but one with personal consequences for those in attendance.

More than 100,000 people have died since violence broke out two and a half years ago between the government and rebel forces. And there seems to be no end in sight. While the crowd at the rally was pro-government, their message was not one of simple support for Assad but one of anti-war and opposition to American interference.

And it resonates with people outside the immediate Syrian community.

“I am against US intervention in the Middle East,” says George, a Filipino-Australian working at Migrante Australia.

Holding a sign denouncing the US plan to strike Syria, he says he’s come to support Syria and tell Melbournians about US overreach in the Middle East. Like many others at the rally, he doesn’t believe there is conclusive proof of Assad’s involvement in the chemical weapons attack of August 21 but he makes clear that he isn’t pro-Assad either. He is for  “peace” and agrees the events of the chemical weapons attack need to be investigated.

But that investigation was completed on Saturday when U.N. Inspectors departed Syria. And while they consult with U.N. Chief Ban Ki-Moon, the US has already released an intelligence dossier that shows with  “high confidence that the Syrian government carried out a chemical weapons attack in the Damascus suburbs”. 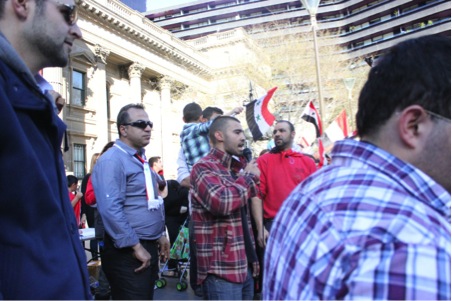 On Sunday President Obama sought approval from Congress, which reconvenes on September 9th, for a limited, narrow strike on Syria. This will delay the strike but not for long.

Sean, 30, a Wikileaks supporter involved in the campaign of Dr Binoy Kampark, doesn’t believe these strikes are necessary.

“The information doesn’t seem to show that any strikes on Syria or any other Middle Eastern country is necessary for democracy,” he says.

He also believes there is a lack of information about what is happening in Syria because of a media bias — something others at the rally would agree with. He believes WikiLeaks can help with such matters in the future, if they win a senate seat, by providing the public with greater access to information.

Joe Khallof, one of the organisers of the rally, says the Australian people have received the message but it is the government that needs to change.

Joe has helped organise similar rallies since the outbreak of the war and says the next time they gather will be when Syria wins.  He believes that the rebels only represent a small fraction of the population, and the civil war is not a true uprising of the people but one orchestrated by outside forces. Regardless of the current situation, Joe believes Assad can win because he has the people behind him.

“When you have your army and your people with you, no one can defeat you. And that’s what I believe.”

Rameez Abdeen is an upstart contributor and third-year Bachelor of Journalism student.  You can read his views on politics and movies on his blogs or follow him on Twitter: @InVinoVeritas5