The ABC political reporter recounts her life in Canberra. 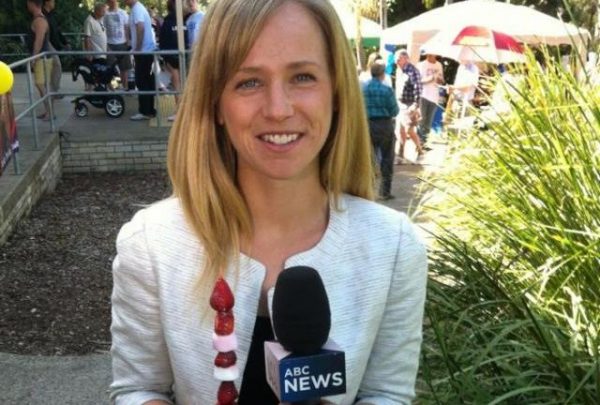 “If you get frustrated seeing politicians at a distance, you’ll be worse up close,” ABC political reporter Melissa Clarke tells upstart.

These days, it seems everyone has become some kind of political commentator, with divided and passionate opinions filling social media sites and comment sections. But if you’re irritated by politicians, a career reporting on politics probably isn’t for you, says Clarke.

Clarke’s current position as Associate Producer at ABC’s Insiders is appropriately named for the journalist.

Clarke has spent a large portion of her career working as a political reporter in Canberra. Although her work sees her report the happenings of parliament, and the people who keep it running, the job is a lifestyle, extending far beyond the walls of parliament house.

“Living in Canberra, when you go to the supermarket and walk down the aisle buying Weet Bix, you’re going to see a politician, a staffer, or someone who runs the Prime Minister’s office, that’s just part of what happens,” she says.

Clarke believes it is important to have connections outside the “insular” group of politicians, staffers and their friends.

“There are people who love to live the insider life 24/7, and they’re quite happy that all the people they have contact with are politicians or staffers. But there are different ways to handle Canberra. And you can be conscious to not get caught in that bubble,” she says.

Clarke confesses that life in Canberra can feel not just physically, but ideologically isolating from the rest of the country, though members of parliament aren’t always aware of that.

“I think there is an issue with the makeup of parliament, in that it isn’t representative of the public at large. It is more male, it is more white, and it’s more religious. I’m really conscious that a lot of things that go on in parliament in terms of debate, processes and discussions, can be very separated from the public at large.

“That’s something that people in political reporting should be aware of,” she says.

It’s a conclusion she’s come to after more than a decade working as a journalist.

Self-awareness and detachment from the insular nature of Canberra is an essential part of the job, and it’s an attitude that she encourages young journalists who wish to pursue a similar career to adopt and nurture.

“The detail is really important, but you need to be able to take a wider view every now and then. But these days, there’s fewer opportunities to do so, because everyone is so much busier. There’s internal fights, and leadership changes, and you can get caught up in working to shorter deadlines.”

Clarke, 34, feigns horror as she proclaims she feels old. But her experience at such a young age shows just how significantly things have changed for journalists in the digital age.

“I started with cassettes. My cadetship was a bi-media cadetship, in radio and television, and then, that was seen as progressive,” she says.

When Clarke first started out, journalists worked in either radio, television, or print, distinctly specialising in one medium. As her career progressed, the boundaries between a television and radio reporter rapidly began to blur.

“That’s been a huge change even across my short career. What you do in a day is so different from where I began. I don’t know when I turn up at the start of my day if I‘m going to do TV or radio, or some combination of the two.”

“Unless it’s something huge, you’re expected to do all of it, every day. And that doesn’t matter if you’re in a metropolitan newsroom, Canberra or overseas.”

This huge change is by no means a negative one, Clarke says. Rather, social media has enhanced the way stories can be reported and people can engage with the happenings of the country, especially those in Canberra.

“[Social media] can be an excellent way of reporting a story, and engaging people in something, that they wouldn’t have otherwise done,” Clarke says, “and a great example of this is Question Time.”

“A lot of people like watching the QT hashtag [on Twitter] at the same time as watching Question Time, because suddenly it’s a bit more interesting. You get the comments that don’t pick up on the microphones, you get context. You can see what they’re saying to each other on Twitter while they’re also having an argument in the chamber. If that gets more people interested in what’s happening in the chamber, that’s really good.

“You could never do that with just a TV story in the same way,” she says.

The biggest issue that social media creates in modern journalism, Clarke says, is the added workload.

“Managing your workload, and having to decide where to allocate time, and trying to get the right balance is tricky.”

It’s a workload that prevented her from undertaking her Masters in International Relations, a goal she’s currently tackling in Melbourne during a year of annual leave from Canberra.

“When you’re working in Canberra, your life is dominated by the parliamentary sitting cycle. The weeks parliament sit, that’s all you do, it takes over everything.

“I’ve always wanted to come back and do a Masters. But I found it really hard to do in Canberra, while I’m working. With the news business in general, trying to say I need every Thursday at 4 pm free to go to a lecture,” she laughs, “news does not work that way.”

Though she maintains it’s imperative to keep a healthy sense of distance between political life and journalism, her area of study is a reminder of another vital component of becoming a political journalist: genuine interest.

“I’ve always had an interest in politics, it’s a necessary point for being a political reporter. If you don’t enjoy politics, and if you don’t have an appreciation for its importance for our society, for goodness sake don’t go into political reporting, because it will do your head in,” she says.

She has more advice for upstart readers who may be interested in pursuing a career in political reporting.

Beginning her career as a general reporter in a cadetship with the ABC, Clarke made her way to state political reporting through what she describes, tongue-in-cheek, as “hassling” her co-workers.

Though Clarke spent small stints of time reporting at the ABC’s regional bureau, she muses that she would have gained more from working in local politics, rather than starting in state politics.

“One of the best groundings is to cover local council issues, because you’ll begin to understand how fractions work, you begin to see the process of decisions being made. Process is really important in determining final outcomes, to understanding why things happen.

“A lot of people who are in local council control local branches, and they have huge influence over state and federal politics. I’ve still got contacts from local factions that are big players in political issues in the major parties on big issues,” Clarke says.

Finally, though, Clarke admits there’s no one way to parliament for an aspiring political journalist.

“It takes years to build contacts, it takes years of trust building, and there are different ways of doing it.”

“There’s probably still the conception that you go to parliament, you go drinking with the old men, and that’s how you get a story. And you can do that, it’s not entirely mythical, but it’s not the only way to do it. You can have conversations with people lower down the tree who have support roles, data investigations, there’s all sorts of stories we never used to get.”

“I think as with so many things in life, you need to tailor what you do for the situation.”

Though she jokes that Canberra can be challenging, she’s happy to keep seeing staffers and politicians in the supermarket aisles.

Maybe someday she will see an upstart reader and La Trobe journalism alumni there, too.