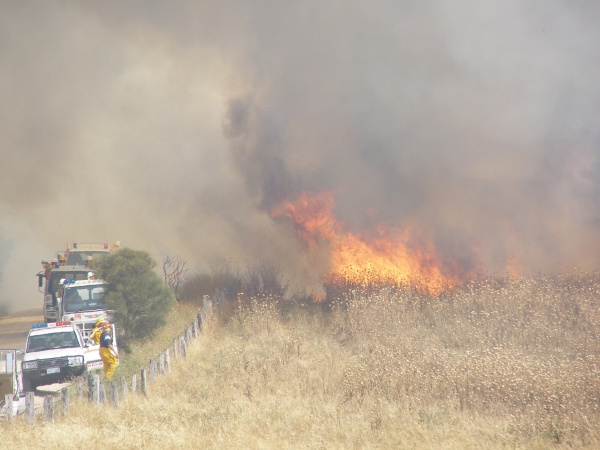 These black spots are likely to endanger rural citizens this bushfire season.

The Mobile Black Spot program is a federal initiative that will provide new and upgraded mobile base stations to extend coverage to isolated areas.

A spokesperson for the Federal Department of Communications and the Arts tells upstart the Mobile Black Spot program is designed to incentivise building base stations in regional and remote areas, where it’s not commercially viable to do so.

The department expects construction of the base stations selected in round one to commence before the end of the year.

However, the wait could prove to be too long for some residents, considering this year’s fire season is predicted to be long and dangerous.

Recent fires in Cobaw and Lancefield, where a planned burn jumped containment lines, have highlighted the risks faced by residents without proper networks.

These were just two of 100 fires burning across the state, fuelled by hot weather and strong winds.

Reports show that many rural residents find themselves isolated without mobile coverage during bushfires, unable to access the CFA app, and any vital emergency notifications or updates.

Of the approximate 6,000 mobile black spot locations listed on the national black spot database, 2,075 are in outer metropolitan, remote, and regional Victoria.

Both Cobaw and Lancefield are listed on the database, but neither qualified for round one’s installations.

The department says that 499 new or upgraded base stations will be delivered across the country, with 110 of those to be installed in Victoria.

“The primary concern for communities that missed out under round one is whether there is an opportunity for them to receive improved mobile coverage in the future,” the department says.

Selection for the program is dependent on a set of criteria: total cost of the base station, the amount of federal funding being sought, the amount the operator is willing to contribute, number of premises in the area, and contributions by state and local governments.

Director of assets and operations at Macedon Ranges Shire Council, Dale Thornton, tells upstart they have been working to address coverage issues in the area for some time.

“Council has worked collaboratively and successfully with Telstra over the last twelve months to address current and future telecommunications infrastructure needs across the Macedon Ranges shire,” he says.

This relationship has seen successful funding for Pipers Creek.

Thornton says the council has also been working with Telstra to find solutions to telecommunications issues in New Gisborne and Lancefield.

“While these measures are an important step in improving mobile coverage in the region, council understands that residents who live in mobile phone black spot areas in the shire are frustrated,” he says.

“Council will continue to work with the community, federal government and telecommunications companies to improve services for residents.”

There has been significant investment from the private sector too; Telstra contributed $165 million, and Vodafone $20 million.

The department says the roll out of base stations will be determined by Telstra and Vodafone, and will rely on local government planning approval and landowner agreement.

The government has also announced a further $60 million contribution for a second phase of the Mobile Black Spot Program, with funding available over a two-year period from 1 July 2016.

The competitive selection process for round two is expected to commence in 2016, with decisions to be made by the end of 2016.

A spokesperson for the Country Fire Association (CFA) tells upstart that mobile black spots do not hinder radio communications, but they are aware of problems faced by rural residents.

“It’s important for the community not to rely on one source of information,” the CFA says.

They also warn Victorians against relying on just one source of information, and encourage citizens to make use of other resources in the event of a bushfire warning or emergency, like ABC local radio, or SKY TV.

Caitlin McArthur is a third-year journalism student at La Trobe University. You can follow her on Twitter here: @CaitlinMcArthu1.