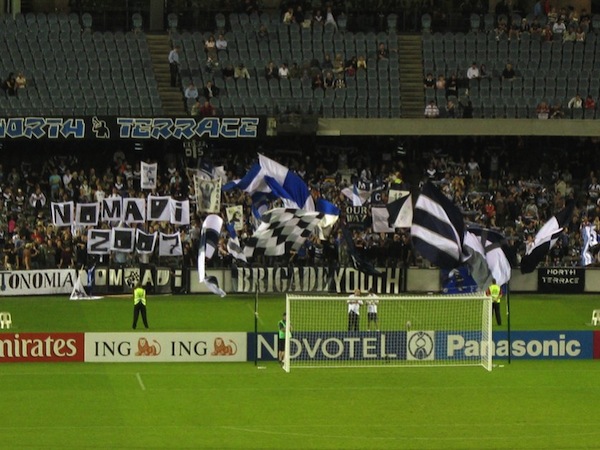 It’s Friday morning and Paul Sebastiani already can’t wait to finish work. Instead of opting for a lazy night on the couch or a night on the town, he’s going to spend the evening screaming his lungs out for his beloved football team – Melbourne Victory Football Club.

Melbourne’s rich and enthusiastic sporting culture make it seem that everywhere we look, we can’t escape the overwhelming presence that it has on the lives of millions in its ability to simultaneously divide and unite a street, a city or even a nation.

But what is it about the concept of sport that can have such an impact on society?

La Trobe University’s Centre for Sport Senior Lecturer Dr. Emma Sherry, believes that sport has been ingrained into society since the dawn on time.

“Sport is something that is inherent in every culture,” says Sherry.

“It’s something that has been important to people for a very long time and it provides something different for everyone.”

For Sebastiani, Melbourne Victory is what his week revolves around from October until April – when the A-League finishes – before his priorities switch onto his beloved Carlton Football Club for the AFL season.

“It’s something I look forward to when I wake up on the morning of the game,” says Sebastiani.

“Getting up knowing I’ll be chanting and cheering my team on…blasting out chants – it’s why we go to games.”

Renowned for its passionate and occasionally controversial supporters, Victory is well regarded for having some of the best fans in the A-League. Sebastiani is heavily involved in the Northern Terrace – the Victory’s active supporter base.

He has not missed a home game in over three seasons, and makes up to five interstate trips a season.

“I don’t know what I’d do without sport…I don’t understand people who don’t like sport.

“It’s exhilarating, it’s breathtaking to watch people fighting for each other in an arena,” he says.

As blindly committed as he may seem, he is among hundreds who likewise travel religiously with their team when playing away from home. But what is it that makes people travel by the hundreds to support a group of people they don’t even know?

“We are not far removed from our ancient roots – we’re still very tribal in a sense. We like to feel like we belong,” Sherry says.

“Also, symbolism is very important to people – There’s a lot of symbolism about sport that people attach themselves to.

“In a way, it’s very similar to how Christians attach themselves to symbols like crucifixes.”

Sherry believes that with the secularisation of society, sport has filled the void left by religion.

“As far-fetched as this may seem, the decline of religions means that sport is one of the places where everyone can come together.

“I got married at the Melbourne Cricket Ground. So as you can imagine, sport is quite a significant part of my life.

“It has almost replaced church in a sense. It’s about coming together and being [around] people who are like you and celebrating or commiserating,” she says.

The Northern Terrace’s methods of fiercely passionate celebrating and commiserating has come under heavy scrutiny, after numerous clashes with authorities in recent times. Incidents including repeated lighting of flares and chair breaking has seen the club enforce restrictions on the supporter group.

While ‘soccer hooliganism’ is more commonly associated with European football, Sherry believes that Australia’s sporting landscape does not bode with such behaviour.

“Culturally, it’s not how we do our sport. There’s no tradition of it in our country,”

“I know that lots of European supporters that come to our country are astounded that we walk together to the game with our friends who barrack for different teams,” she says.

It’s hard to believe that fanatics barrack for their teams so hard that the club itself has placed restrictions, including segregation and heavy police presence, upon them. However, Sebastiani remains defiant stating that restrictions won’t stop them cheering.

“We’re there to chant – not to get involved with the club’s decision.

“We want to spur our boys to as many wins as possible and that’s our sole purpose,” Sebastiani says.

Kevin Cheong is a third year Bachelor of Journalism student at La Trobe University. You can follow him on Twitter at @cheongas.