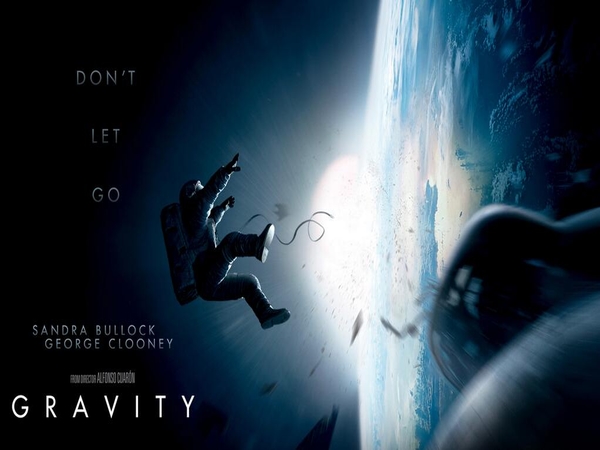 Gravity follows the exploits of Dr Ryan Stone (Sandra Bullock), a rookie astronaut on her first space mission. While busy at work upgrading the Hubble Telescope, a wave of space debris from a satellite collision is swept into the path of Stone and her team, causing catastrophic damage.

After managing to break free from the chaos, Stone and charismatic space veteran, Matt Kowalski (George Clooney), are the only survivors. Radio contact with Earth slowly fades, as do their prospects of returning home, leaving the two of them adrift in the gaping void of space, with time and oxygen running out.

Gravity works hard to separate itself from the pack and create an experience anyone (not just sci-fi fans) can enjoy, steering clear of genre clichés like aliens and blackholes. The end result is a neatly packaged thriller flick, rife with moments of gripping tension and subtle horror, built around the vast confines of a heart-achingly gorgeous space setting.

Director Alfonso Cuaron (Children of Men, Harry Potter & The Prisoner of Azkaban) has already established himself as one of the most talented film-makers around, but this latest offering could elevate his status even further.

It’s cinematic wizardry of the highest order. For optimal viewing, 3-D is the only option.

It’s a similar situation to James Cameron’s Avatar, where the whole experience is exponentially heightened by that sharper, more realistic image. 3-D is more expensive and, admittedly, has been a fad abused by lesser movies over the last few years, but this is one of the few examples where it’s benefits are utilised effectively.

Positively, early box-office takings suggest audiences agree, with the film breaking the opening weekend record for October in both the US and Australian markets, with 80% coming from 3-D.

The film score, which is composed by Steven Price (The World’s End, Attack the Block), is a masterpiece deserving as much credit as the images it chases after so keenly. If Cuaron’s use of POV (point of view) shots, extreme closeups and rapid cuts invoke the audience’s emotions and empathy towards the main characters, then Price’s score finds where it hurts and pushes it unrelentingly hard.

Conversely, during the slower, more contemplative scenes – as Stone & Kowalski admire the beauty of Earth as they drift by – Price beautifully compliments the sweeping panoramas with a subtle melodic suggestion of hope. It will draw plenty of similarities to Hans Zimmer’s track ‘Time’ from the Inception soundtrack, but that’s not a bad thing.

In terms of acting, it’s generally good rather than great.

Clooney more or less plays himself (or at least his stereotype) in a spacesuit, with plenty of suave and an ice cold composure in any crisis, serving as a great foil to Bullock’s vulnerable Stone.

Those concerned with the casting of Bullock based on her past tendencies to indulge in melodramatic rom-coms will be pleased with her performance. It’s not a show stopper and ultimately the character isn’t charismatic or likable enough to become a classic sci-fi heroine, but the role isn’t designed to take on that guise. Her susceptibility and, at times, weakness, is the hallmark of the character.

But there is one thing that Gravity lacks which stops it from being a true great.

While the storyline is good, well paced and definitely interesting enough to keep even the most casual movie goer glued to the edge of their seat, it lacks a philosophical punch. Often, truly great examples of cinema are the ones that stay with the viewer long after they first watch it, forcing them to think it all through, then re-think it, question it and wonder what it all means.

Comparisons with the previous go-to revolutionary space epic 2001: A Space Odyssey (1968) are almost unavoidable. But where Stanley Kubrick elected for philosophy and existentialism over mainstream recognition and success, Gravity chooses to entertain the viewer as much as possible for its running time, before cutting them loose forever.

It makes for a very, very good film, but one that may not stand the test of time to the extent it’s visual accomplishments warrant.

Gravity is in cinemas now and is rated M for Mature.