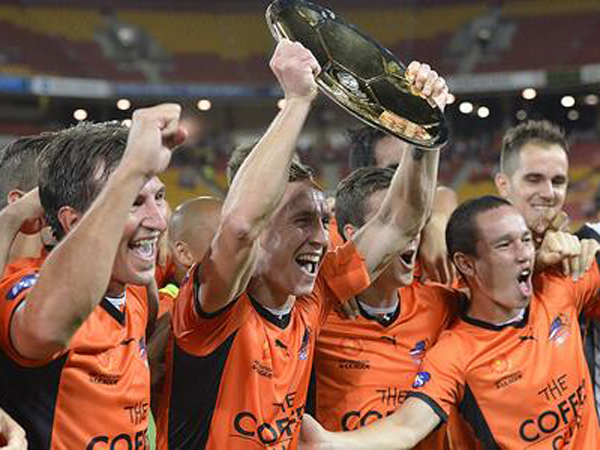 Brisbane Roar might have been coming off the back of two straight A-League grand final victories, but in February last year, a third premiership looked an insurmountable task.

Ange Postecoglou, the mastermind behind their A-League domination, had accepted a lucrative deal at Melbourne Victory; the so-called “brains” of the Postecoglou-era, Rado Vidosic, was sent back to his original role as technical director following an unsuccessful stint as head coach; and the appointment of a relative unknown, Mike Mulvey, had Brisbane’s fans in uproar.

Most crucially of all, the club was languishing in ninth on the table – just a few points from the bottom of the league.

But just 13 months later and a club that was all of a sudden in the midst of a crisis is now back at the summit of Australian football.

Mulvey’s induction at Brisbane may not have been pretty. Chants and banners demanding his head were a common theme at Suncorp Stadium in the weeks following his appointment.

“They had a big-name coach in Ange and when Rado didn’t work out they wanted another big name,” The Brisbane Times’ Phil Lutton tells upstart.

“They wanted to fly someone in, but instead they got Mike Mulvey. Luckily that turned out for the best.”

Congratulations to @brisbaneroar for claiming the Premiers’ Plate after a late strike from Luke Brattan! #BRIvMVC pic.twitter.com/UPgoUTJ1Bc

Brisbane’s decision to hire Mulvey was a surprising one. Despite spending more than 10 years in management roles throughout Australia, Mulvey’s only experience in the highest echelon of Australian football was when he was assistant to Miron Bleiberg at the now dissolved Gold Coast United.

Adding to the sense of unknown surrounding the Manchester-born manager was the fact he was in charge of Melbourne Victory’s women’s team when he was given the job at Brisbane – a rare scenario at any level throughout the world.

“(His position as a W-League manager) completely added to the skepticism of Mulvey. That’s not unusual, it was a fair sort of reaction,” Lutton says.

“There’s no doubt the Roar took a bit of a punt with Mike. But he’d been a very successful youth coach and as a coach of women’s football and he had a reputation of winning.

“He also had a very good record of finding good youth talent and so he ticked a lot of boxes.”

Under Postecoglou, Brisbane became one of the first A-League sides to firmly establish their own unique football philosophy.

Their possession-based style took the country by storm, culminating in back-to-back premiership triumphs and the longest undefeated streak in Australian sporting history (36 matches).

Therefore, when it came to appointing Postecoglou and Vidosic’s successor, retaining Brisbane’s football ideologies was at the forefront of the club’s mind.

Mulvey, a renowned student of the game, fit the bill perfectly.

“He’s done really well,” Lutton says. “They play lots of possession football with a lot of passing, which was something that Ange first started.

“Mike has changed a few things, like players and positions and he’s switched people around here and there, but mainly he’s just got a really aggressive take on the game. He wants to win, he wants to score goals and he doesn’t believe in sitting back and defending leads.

“He and Ange probably identify quite closely on that front.”

Upon Postecoglou’s departure in the off-season of 2012, a number of Brisbane’s premiership heroes opted to follow their former manager’s lead.

Key players like Erik Paartalu, Mitch Nichols, Massimo Murdocca and Sayed Adnan all left in the months prior to and following Mulvey’s arrival.

But with the foundations of a two-time premiership winning squad at his disposal, Mulvey quickly turned things around and the acquisitions of Liam Miller, Diogo Ferreira, Matt McKay and Steven Lustica only added to a squad he knew was capable of once again winning the league title.

“If you have a look at the squad, the building blocks and the key pieces were already there,” Lutton says. “This was essentially a championship-winning football team.

“His biggest battle was to win the players over and to get them to buy into what he was trying to do. Once he did that, it wasn’t going to take long for the quality to once again come to the top.”

Now that Brisbane is back at the summit of the A-League, the only thing left to achieve is grand final success.

But with a squad firing on all cylinders and a manager that has exceeded all expectations, a third A-League championship in four years looks inevitable.