It’s hard to imagine a world without music. Music is a timeless art form that is always present – when we watch television, when we walk through a shopping centre and whenever we turn the radio on. However, aside from entertaining us, the most important and timeless purpose of music is to communicate.

All cultures used song as a way of passing on stories, history and law to younger generations. So, it makes sense to use music as a means of communication to celebrate and embrace cultures from around the world.

This week, the fourth annual Human Rights Arts and Film Festival is screening films about human rights at cinemas around Melbourne. As a component of the festival, Rhythm and Rights is a day of multicultural music that aims to inform and educate people about acceptance of different cultures. 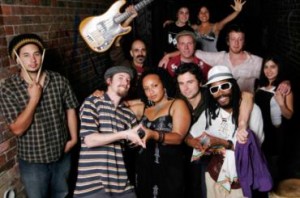 Rhythm and Rights organiser Ariella Gery says that music is indeed a great way to celebrate the many rich and dynamic communities that exist in Melbourne. ‘It calls out to a lot of people,’ she says. ‘It’s a very accessible medium…we’re trying to create a day of cultural diversity and appreciation and music is a great way to reach people.’

Taking place at the Ceres Environmental Park in Brunswick, a place I remember being taken to on a primary school excursion to learn about Aboriginal culture and bush tucker, Rhythm and Rights uses music, dance, art, comedy, street performance, stalls and food from around the world to provide a fun day that aims not only entertain but also educate.

‘We’re hoping that everyone just comes and has fun,’ Gery says of the event that is orgainsed by dedicated volunteers. ‘And hopefully if people can come and learn some cultural acceptance too, that would be great.’

Hosted by comedian Trent McCarthy, the festival will feature the music of Melbourne-based musicians originating from all around the world. Artists such as Mista Savona and his seven piece reggae band, Reflejos, Ajak Kwai and Kundalila will be joined by dance groups Legacy Fam and Wassawumba. The sheer range of acts and nationalities is an indication that music really is universal.

This year, Rhythm and Rights is also teaming up with the Melbourne Immigration Museum to provide interesting and educational displays about the many different groups of people that have made Melbourne their home.

In an age of overly commercial, generic pop music dominating the charts, it is refreshing to be able to celebrate interesting, varied and international genres of music. For, as Leonard Bernstien wrote in his 1976 book The Unanswered Question, ‘music, because of its specific and far-reaching metaphorical powers, can name the unnamable and communicate the unknowable.’

The Rhythm and Rights Music Festival will be held on Saturday, 8 May at Ceres Community Environmental Park, from 1pm. For more information and tickets, look here.

Kelly Theobald is a Bachelor of Journalism honours student at La Trobe University and a co-editor of Upstart. This piece was first published on her blog, Music Meets Girl.