The AFL and the Melbourne Symphony Orchestra combined last night to put on a performance of the 2010 Grand Final draw, writes Marie Trevithick. 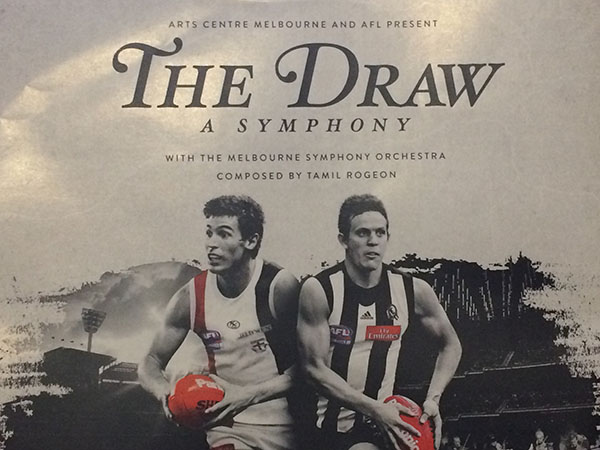 When the you think of orchestral music, what immediately comes to mind? Beethoven? Perhaps Mozart? Or even Bach?

Sport and music were combined last night in an unusual way with the Melbourne Symphony Orchestra’s performance of The Draw: A Symphony, held in conjunction with the AFL at the Arts Centre’s Hamer Hall.

A specially compiled version of the nail-biting game, edited by Michael Ormond Robinson, was displayed on the big screen while the MSO played a 70-minute original score written by Melbourne composer and Hawthorn supporter Tamil Rogeon.

The game was only the third draw in AFL/VFL Grand Final history.

“One of the key narrative points is that Collingwood were unable to kick a goal for such a long time … that was something that is illustrated in the film and also the music,” Composer Tamil Rogeon tells upstart.

“Other elements were the famous bounce, Goddard’s amazing mark … as well as the tightness and the struggle of the first quarter and also the exploration of what happens after the siren after no one’s won and no one’s lost.”

The draw was part of the appeal for Rogeon.

“Everyone knows what the results are if you are going to score to a pre-existing football match,” he says.

“I thought it would be very interesting to examine artistically the sort of nothingness of both teams not winning, and the existential crisis about not knowing what or who they are or what is going on”.

The score, most of which was composed to picture over a period of four months, highlighted dramatic leaps, huge kicks and the now famous bounce, which saw both teams deadlocked at 68 apiece with 90 seconds left of play.

The transition from the final seconds of play to immediately after the final siren was obvious, the music changed from fast-paced rhythms to slow, almost exhausted sounding long notes, echoing the players collapsing on the turf post-match, not knowing what to think.

Many attendees at Hamer Hall dressed like they would have on grand final day, wearing their Collingwood and St. Kilda gear including scarves, beanies and guernseys. Pies and sausage rolls were available for purchase from staff wearing AFL guernseys. A siren sounded as the doors were opened and the unmistakable voice of Craig Willis asked those in attendance to take their seats.

The crowd throughout was passionate, one Collingwood supporter shouted out “Bring him back” when a montage of then Collingwood coach Mick Malthouse was displayed on screen just before the beginning of the third quarter. Supporters of both Collingwood and St Kilda were cheering when their team scored, and sighing when they failed to capitalise on opportunities.

Rogeon says a performance such as this could be possible with other past AFL matches.

“It wouldn’t be the same effect, because it’s a different outcome. It wouldn’t be exactly the same [but] there are elements within the game that would work, a goal that creates momentum for one team is a pretty universal concept.”

is a second year Bachelor of Media & Communication student at La Trobe University. You can follow her on Twitter at: @maztrev18.