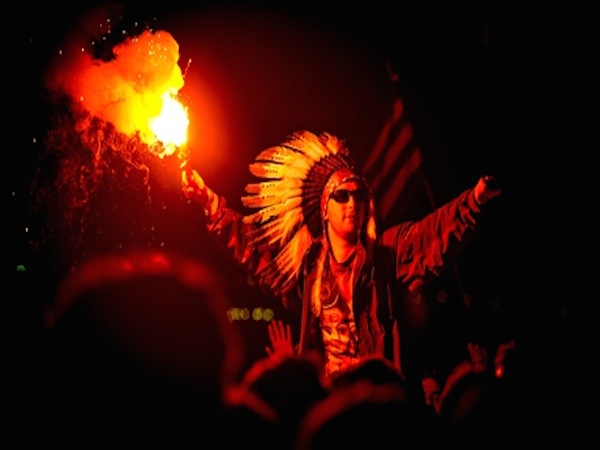 Head along to any summer music festival across the world and you’ll see a large contingent of people wearing anything from bindis to Native American head dresses. These are typically seen as examples of self-expression, fashion and entertainment. But this year, one Australian festival has drawn the line.

On Meredith Music Festival’s list of banned items for 2014, there’s a big emphasis on no costumes. And with one click, the festival’s website leads you to an article titled “But Why Can’t I Wear a Hipster Headdress?” – an example of the ongoing debate on cultural appropriation within the music industry.

Cultural appropriation is where elements of cultures are taken and then applied to something else – such as a non-Native American wearing a Native American headdress.

It’s understandable why Meredith has chosen to do such a thing, particularly in terms of the war bonnet.

The headpiece, although it carries an element of beauty, echoes an extensive history of ostracism and genocide within the Native American culture. As this is only one definition from a list of many, it seems the main problem for this issue revolves around ignorance and lack of information for the history of cultures across the board.

Some Melbourne musicians and artists are particularly vocal about the issue, labelling it an “interesting topic” when it comes to music festivals.

“I’ve never really noticed people wearing things like headdresses at festivals. Actually let me rephrase that; I haven’t noticed someone wearing one and thought there was a problem right there and then,” one musician, who wished to remain anonymous, told upstart.

“I think it might have something to do with being fully immersed in the music before me, therefore whatever glances I take of the audience around me are quick.”

“In any other setting if I was to see something I find offensive or disrespectful I would say something, but at music festivals I tend to get a little too focused on what’s happening or about to happen on stage. By not taking an issue with it whilst in a crowd I kind of feel like I’m unconsciously supporting appropriation by being a bystander, a position that I don’t particularly want to take.”

Recently, country music artist Taylor Swift has come under fire with the release of her new music video, ‘Shake It Off’.

The video, which depicts various forms of dancing, touches on African-American dance culture and illustrates Swift ‘mimicking’ these aspects. In a series of tweets, the video was labelled “inherently offensive and ultimately harmful” on Twitter by rapper Earl Sweatshirt.

The uproar caused by the music video makes you consider what else is appropriate in the music industry. Electronic group Jamiroquai use a warbonnet-style headpiece – as do Australian musicians Empire of the Sun. Gwen Stefani adopted “harajuku” culture in 2004 following the release of her album Love. Angel. Music. Baby. Is it racist? A fashion statement? Or is this all just a display of admiration and the uniting of cultures?

“No one is burning the headpiece or item of clothing – nor are they destroying it. I haven’t worn one because I don’t want to be blasted by anyone – I think they’re truly so beautiful.”

“But its like, how far are we going to go back to ban things, or decide what’s appropriate? Most of this is worn as fashion. With that being the case, then a lot of things need to be banned from festivals if it takes from other cultures – what about musicians that use sitars? The Coachella Music and Arts Festival in California has used tee-pees for years. Is it fair?”

Looking at the two sides, a solid argument is raised for both. Overall, the lack of understanding across the board about the history of indigenous cultures is the main issue, where items of clothing that represent the deaths of thousands are worn for novelty.

If people wish to wear traditional items of clothing to a music festival of all places, it’s ultimately down to personal choice. However, it’s best to brush up on research first before wearing something people may consider inappropriate during a Skrillex set.