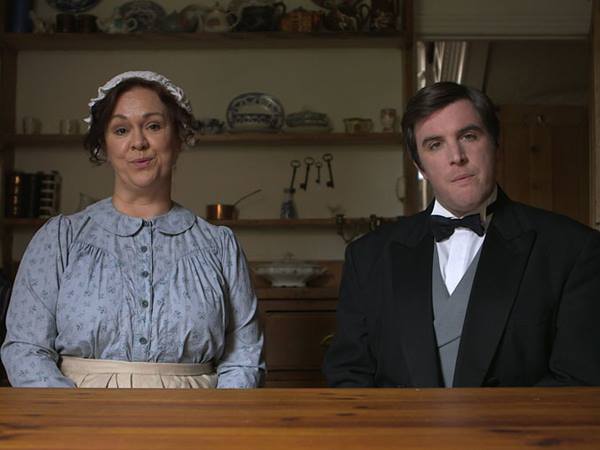 Wimpole Street is filmed in Muswell Hill, London.  In a series of ﬂy-on-the-wall style interviews, an unseen journalist interviews the Miller household concerning the disappearance of Mr John Miller M.P. As the mystery unravels, hints of foul play and political intrigue bubble beneath the minutiae of domestic drama.

Shannon wants people to come away from her series with a laugh, a recipe for eggless ginger cake, and a sense that time may ﬂy, but people never change.

I grew up with Victorian comic novels like Nicholas Nickleby and The Diary of a Nobody, as well as series like Upstairs Downstairs, and later Downton Abbey and The Ofﬁce.

I love a good comedy of manners. I also love social satire and the humour that lies within strict social codes. I just made a show I wanted to watch.

It’s a fresh take on a familiar genre – an old-fashioned sitcom with a twist.

How do you ﬁnance your series?

It was micro-budget and a labour of love for all involved. Maybe we’ll do crowd-funding for season two.

Location. We had no idea where to shoot. We researched museums, sound stages, theatres and country homes but they were all too expensive. Finally we realised the answer was on our door step. I live in a Victorian-era house! So after some wonderful production design by Frances White, we shot in the house where I live!

Through a combination of social media, newspaper reviews, blogs and word of mouth. Being in festivals helps as well!

It’s a great format. I love the way it’s totally democratic. Any creator can make a series and upload it on line. It’s up to the audience to decide whether they’re going to vote with their views. I think the web format encourages creativity without the limits. I also like the way web creators all support each other. It’s a great community.

Wimpole Street on the web: