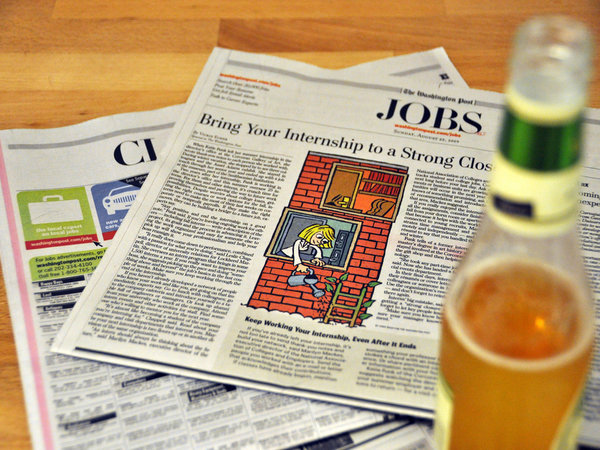 Graduate employment rates are at their lowest since 1992.

According to a recent article by The Drum, we are coming to “an end to the age of entitlement”.

The article suggests that university graduates face a future of unemployment or second-rate shift work.

A rise in those seeking work in other fields also suggests that graduates have been unable to secure work in their qualified areas.

Some have suggested this is a result of uncapped enrolments, with Australia experiencing an over-saturation of graduates in job markets.

upstart spoke to three recent graduates about their transition from university to the workforce.

Laura Bell graduated from Monash University with a Bachelor of Arts last year, but tells upstart she is yet to leave her call centre job.

Bell, who majored in philosophy, was unsure of her career prospects upon finishing her studies, and feels she graduated without any practical qualifications.

“I don’t see myself getting a job related to my field of interest, because unless you go further into academia, there are no relevant jobs,” she says.

Bell felt she needed to pursue another degree to improve her employability, so later pursued graduate entry into law at La Trobe University.

“My call centre job pays well for what it is, the hours are flexible and it’s easy for me to stay there while I try to figure out what to do next,” she says.

Despite her struggle, Bell says she doesn’t regret completing her degree, saying it has broadened her horizons.

However, she warns current students against naivety.

“I think students go to uni under the impression that having the piece of paper is all that is required to get a good job, however, in reality many industries are over-saturated with graduates and it’s difficult to find jobs,” she says.

Romina Atai has had some success since graduating last year.

She graduated from Deakin University with a Bachelor in Nutrition, and tells upstart she was initially very nervous about her employment prospects.

“There was an expectation that I [would] get a job in my field straight away, the closer it got to my graduation, the more I felt that pressure,” she says.

“I said to myself that as long as I can get a job somewhere that makes me happy and satisfied with what I do, then that would be good enough until I find my dream job.”

Atai is currently employed part-time as a medical receptionist and has just started a new position as a personal trainer.

She says graduation marked 15 years of full-time study, and at 22-years-old, she’s not too concerned about landing her dream job in preventative health care straight away.

“I wanted to start a new chapter in life, to just work as much as I can and travel the world, to explore different options in life,” she says.

She says students need to be realistic about their situation.

“When students put themselves under too much pressure it can become too stressful and that’s not what life is about,” she says.

Atai is optimistic about the future.

“I can see myself finding employment in my field, hopefully by the end of the year,” she says.

Katie Graham is another recent graduate who believes she’s not too far from landing a full-time job.

She tells upstart she hadn’t been particularly nervous about securing employment prior to graduation.

She aimed to find a part-time job to earn an income, and an internship to gain further experience.

“This seemed like the easiest option for me, whilst being carefree and flexible with no hard commitments,” Grahams says.

Things didn’t quite go to plan.

From October to December, Graham found herself submitting close to ten job applications every week.

“It was extremely frustrating, as even some of the very low paying jobs wouldn’t respond to my applications,” she says.

She eventually secured a full-time position as an assistant to the owner of a publishing company.

Graham says the job is a good start for someone with an interest in the writing and media industries, but it still isn’t where she wants to be.

“Sorting someone’s mail has made me feel very disheartened because I know I have more potential than that, but as someone who is new to the workforce, like many others my age, these tasks are standard and expected.”

Graham says she strongly believes university can never really prepare you for the workforce.

“We learn the ropes at university, but not how to climb them,” she says.

Despite being disappointed with her current position, Graham knows that it’s just a starting point.

After all, Tina Fey was working at a YMCA at 23.

“I tell myself daily that you must don sensible flats before you can walk in those boss lady heels. I’m just getting started,” Graham says.

This is part two of upstart’s series on graduating. You can read part one here: There’s still jobs for graduates.