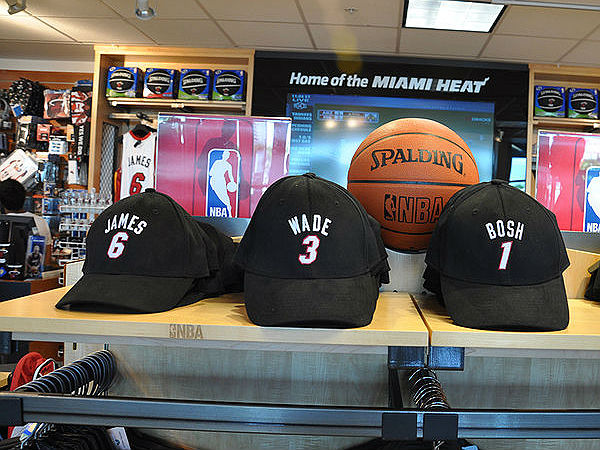 There’s no dismissing it anymore, no waving off of the potential greatness now within reach.

After taking their winning streak to 26 games against the Charlotte Bobcats on Monday, the Miami Heat are just seven wins shy of equaling the record mark of 33 consecutive wins – set by Wlit Chamberlain, Jerry West and the rest of the 1971-72 Los Angeles Lakers.

Even with the NCAA in the midst of its annual maddening state, Miami are the biggest story in basketball. If the Heat continues on to set the new standard, they’ll undoubtedly secure their place in the history books.

However, one of the most unbelievable facets of Miami’s hot streak is the way it has shown a complete reversal of narrative surrounding the team. Where they were once booed and heckled; they are now revered and cheered.

When the trio at the core of Miami’s roster joined forces a little over two years ago, complete with preseason championship-esque celebrations, it was unimaginable that they would be celebrated by the consensus. But, here they are, on the precipice of greatness, with the basketball world cheering them on.

The support isn’t limited to the stands, with former NBA greats throwing their weight behind the Heat’s push to break the record.

Laker legend, and current owner of the streak, Jerry West said he hopes the Heat eclipse the previous mark.

“Honestly, I think they’ve got an incredible chance to do it,” West told the Los Angeles Times.

“I really do. And people say to me, ‘Does it bother you?’ Absolutely not. If they would break it, my gosh, I think it would be a wonderful story. I have no problem with that.”

However, despite the focus currently centering around their push for the record books, the Heat know that ultimately one is more important that 34 – and that a championship is the standard set for Miami.

“You don’t get a plaque, a ring or nothing for 34 wins in a row. You get a record that’ll probably be broken one day. Records are meant to be broken. But championships last forever. As a team, we know that. Somebody was telling me it would be way cooler to win 33 in a row. I’m like, ‘Man, please. Get out of here with that.’ They won’t be throwing confetti after [34]. I’ll guaran-damn-tee you that.”

There’s another win streak making waves in the NBA, in arguably the least-South Beach styled location in the Association.

Out amidst the Rockies in Colorado, the Denver Nuggets have chalked up fifteen-straight wins, and surged into the Western Conference championship picture.

The Nuggets, for lack of a better term, are the anti-NBA current model.

Where opposing franchises are attempting to stack their roster with superstars, Denver are a team build. Six players on the Nuggets roster (Ty Lawson, Danilo Gallinari, Andre Iguodala, Wilson Chandler, Corey Brewer and Kenneth Faried) average over ten points per game, while Andre Miller and JaVale McGee averaging a shade under with 9.4.

Such a spread has caused pundits and fans to question just who can step up for the Nuggets when they need it the most, however, over the course of their winning spell it is the lack of a clear number one that has helped carry them to victory.

Their 114-110 triumph over the Oklahoma City Thunder last week was a testament to their spread approach. While, the Thunder only had three players break double-digits (Durant 34, Westbrook 25 and Martin 14), the Nuggets had six players contribute ten or more. Further, every Denver player who got minutes in the game scored; five Thunder players didn’t score a point.

The Nuggets cannot compete in the superstar stakes, but that isn’t the way they play. Rather than relying on one or two shining lights, they count on the entire roster to carry the load.

It’s a theory paying dividends at the moment.

Another year, and Sacramento Mayor Kevin Johnson is in the midst of another desperate play to keep the Kings in his city.

After years spent at the negotiating table searching for the required funding, Johnson triumphantly announced via Twitter that an agreement had been reached, securing a $448 million commitment to build a new downtown arena for the Kings.

However, the problem for Johnson and his constituents in the Californian capitol, is that where in the past a potential relocation was largely speculation, a separate deal has been agreed upon that would see the Kings relocate to Seattle – and reawaken the sleeping SuperSonic franchise.

While Johnson trumpeted his stadium deal as a “great day” for Sacramento, it’s hard to avoid thinking that he and his city are simply shutting the gate.

The horse has already bolted.