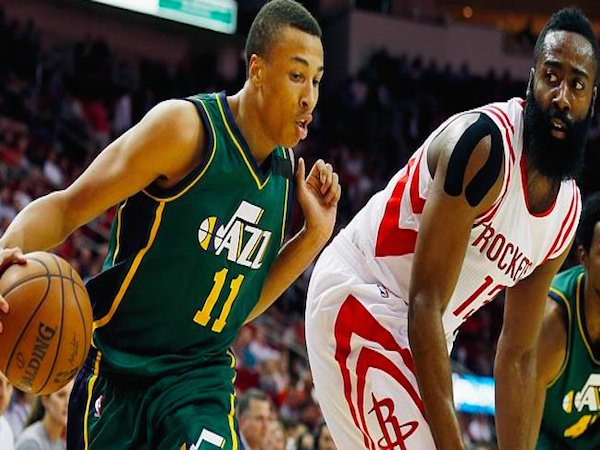 The 20-year-old Australian basketball player, who was drafted by the NBA side in 2014, was injured earlier this month in an exhibition match with the Australian team.

This has reignited debate about whether players should use their off-season to get into peak physical condition for their team rather than playing for their country.

The Boomers were playing against Slovenia in a warm up match to prepare for the upcoming series against New Zealand.

This series will be crucial to qualify for the 2016 Olympics.

The Jazz were a force to be reckoned with after the trade deadline last season, going 19-10 after Exum was put into the starting line-up.

Some have predicted the Jazz could push their way into the top eight of the Western Conference in the 2015/2016 season and claim a playoff spot for the first time since 2012.

But Exum’s devastating knee injury has been a significant blow for the side.

This isn’t the first time an injury has fired up the club or country debate. U.S. player, Paul George, injured his knee last season during an exhibition match.

Satch Price, contributor for SB Nation, recently said that the NBA might need to get tougher on players turning out for their countries, but general managers can’t force players to stay home.

“The end result is many owners spend the summer crossing their fingers and hoping their highly paid employees don’t get hurt while playing on someone else’s dime. If it happens, tough luck,” he said.

Last year after George’s injury, NBA Commissioner Adam Silver said that it may be time to look at how the NBA handles the international competitions.

“At this point, I don’t anticipate a major shift in the NBA’s participation in international competitions,” he said.

“Of course, we will continue to evaluate the pros and cons of participating in international tournaments.”

Mark Cuban, owner of the Dallas Mavericks, has been a long time advocate to hold players out of international games. One of the side’s superstar players, Dirk Nowitzi, has been continually turning down opportunities to play for his country.

This year though, Nowitzki will play in the 2015 EuroBasket, which is to be held in Germany.

Cuban said it will be a good opportunity for Nowitzki’s home fans.

“Games are being played in Germany. It will be a chance for his fans there to see him play,” he said.

The Jazz have supported Exum’s decision. President Randy Rigby said it was a good course of action.

“Especially for young players, it’s a good opportunity for them to really develop their game and continue their development,” he said.

Teams are technically only allowed to hold out players with injuries, but that doesn’t stop some teams. The San Antonio Spurs previously stopped players, Manu Ginobli and Tony Parker, from playing with their national teams.

Ginobli injured himself in the 2008 Olympics, forcing him to miss parts of the next NBA season. In 2012, he struggled to play towards the end of the year due to physical exhaustion.

Not all players oppose the idea of playing for their country, many feel it is an honour.

“To miss London was disappointing. I could have been [a] four-time Olympian, potentially, but to go to my third next year will be a great honour,” he said.

Players also use national selection as an opportunity to test themselves against some of the world’s best.

Some of NBA’s biggest names, LeBron James, Kevin Love and Dwayne Wade, held themselves out of international competition last year.

After seeing first-hand George’s injury, Durant said the risk was too high.

“It took everything out of me seeing that,” he said.

Players are being forced to decide whether the risk is worth playing for their country. It may take another injury setback to an NBA player to cause others to rethink their choice.

Featured image: Getty Images.
Corey Kennedy is a second-year Bachelor of Journalism (Sport) student studying at La Trobe University. You can follow him on Twitter: @c_kennedy23.