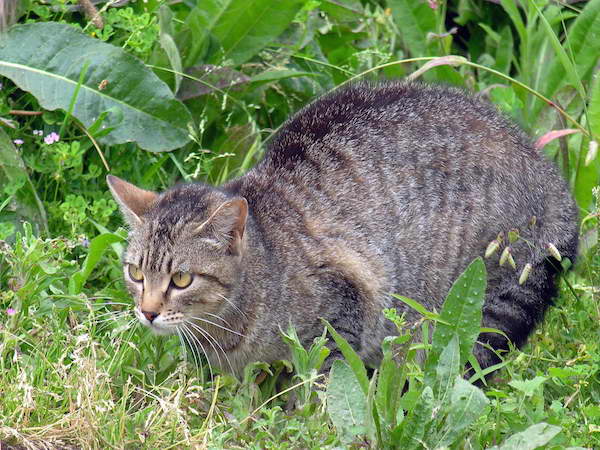 Experts say that there are at least 20 million feral cats in Australia, endangering native wildlife and destroying farming production.

Numerous strategies have been put in place to control levels of feral cats in the past. In 1999, the Threat Abatement Plan for predation by feral cats was published to coordinate a nationwide response to the effects feral cats have on biodiversity. The plan was reviewed in 2008, and the Department of the Environment is now seeking public comments on a third variation.

Everyday Australians have a greater role to play in the protection of threatened species than once thought.

“If a cat catches a bandicoot and scratches it and causes a slight cut or if there’s an actual puncture wound, and there’s bacteria in a cats claws or in their mouth, that wound is almost guaranteed to become infected and could kill that animal,” Graham says.

“Another danger cats can pose is toxoplasmosis. About 87 per cent of cats worldwide carry these parasites,” he adds.

The parasite, toxoplasmosis gondii, is often found in cat faeces in suburban lawns and urban fringes where there’s bushland. It is particularly dangerous to wallabies and kangaroos that venture into these areas. Graham says if animals eat cat faeces and contract the disease, they can lose their vigilance and awareness of predators, and eventually lose their eyesight.

“Normally a wallaby can see someone and just run, but with toxoplasmosis in its later stages, you can walk right up to them,” Graham says.

“At least every day we’ll take a call for a cat-related issue, guaranteed.”

Resources, funding and education are imperative for the protection of both cats and the environment.

Glenys Kimber is a volunteer cat trapper at Help Save the Furry Ones, an independently run, not-for-profit animal charity that aims to reduce the number of animals that are euthanised each year.

Kimber says cat rescue groups and volunteers are trying to spread the message about responsible pet ownership by getting them spayed. She has fostered cats and seen the transition from feral to domestic in three days, due to cats’ domestic origins.

“Sometimes I pull out an adult [cat] and think ‘You’re really not that feral’ but it takes specialised foster care and I don’t have those resources at the moment,” Kimber says.

“We get people ring up and say ‘There are six cats in my backyard, I want to desex them’. We get them cheap prices and come and help to trap them. More and more people are putting up their hand and saying ‘I’ll take responsibility’.”

There are ways that both passionate cat lovers and passionate wildlife warriors can help, and it starts with making sure cats are desexed.

“We firmly believe that it’s the government’s responsibility to ban the advertising and sale of non-desexed animals,” Kimber says.

“No more cats on Gumtree, no more non-desexed cats in pet shops. Victoria has come a long way with only selling desexed animals in pet shops.”

“There’s a grass root bunch of volunteers everywhere getting out there. But we’re all volunteers and have no funding,” she says.

Kimber says she would love it if someone would say “desex your pets” at the end of every news show, like Drew Carey does on The Price is Right.

“We also recommend if people have the time and money, make a cat run outside, so they actually still can go outside,” he says.

Graham says you wouldn’t let your dog jump the fence and go into your neighbours’ backyard, so why would you let cats?

“If you buy a dog, you buy a lead. If you buy a cat, you desex and microchip it, and you consider how you are going to house it inside,” Graham says.

Effective methods for feral cat control may be hard to establish and take several years to implement, but there are strategies that every day Australians can put in place. Making sure that cats are desexed and stay indoors can help protect native wildlife, as well as the future of cats in Australia.