For some farmers clearing trees is sickening. For the rest, it’s business as usual. 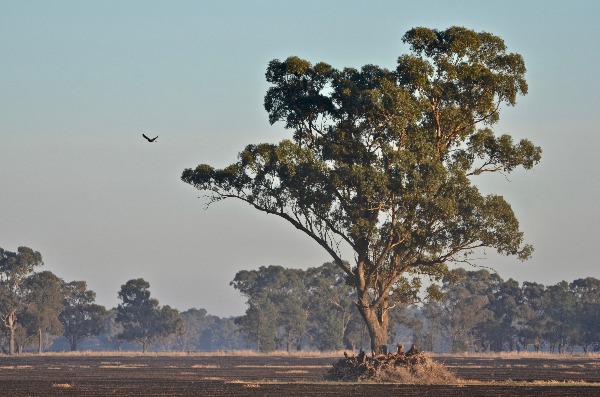 “They just burnt hundreds of trees out because they could. They don’t care. They push the dead trees up against the live trees and they just burn the whole bloody lot, lock, stock and barrel.”

Bill Ferguson, a cropping and livestock farmer from Rennie in the Southern Riverina, has seen the effects of a change in New South Wales land clearing laws on farming communities and the landscape.

“We’ve got neighbours here, and all they want to do is knock their bloody trees down and they are,” he told upstart.

“But they don’t do it for one year; they’re doing it over probably five years or six years. They’re working on it but there’ll be no bloody trees left in there.” 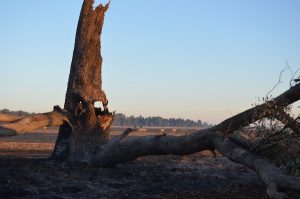 In 2016 the NSW Biodiversity Conservation Act was legislated, allowing farmers to self-assess their properties for land clearing. Previously, the Native Vegetation Act 2003 banned broadscale clearing unless it maintained or improved environmental outcomes, which were scientifically assessed.

Since the new act, Ferguson has seen a major landscape change as neighbouring farmers have destroyed thousands of paddock trees to open up more land for cropping.

“It is wicked what some of these people are doing, all for the sake of a dollar,” he said.

But Ferguson chooses not to report what he sees as over-clearing to authorities, for fear of being ostracised in his community.

“You can’t really say anything because you live here, but then you sort of distance yourself a little bit from those people,” he said.

The devastation doesn’t stop in Ferguson’s area, either. It spreads to neighbouring communities, including Savernake and Mulwala and extends across the Southern Riverina.

Just a few years ago the Savernake-Mulwala road was surrounded by farms peppered with Bulloak, Yellow Box and Grey Box trees. Now it is becoming a sparse landscape where entire paddocks are being cleared to adjust for GPS technology and wider machinery. The majority of trees that remain are either scorched or are roadside remnants. 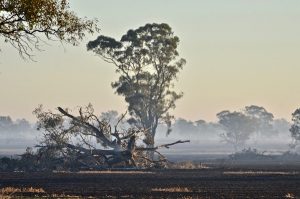 The drive to Mulwala is a heartache for Ferguson and other environmentally conscious farmers.

“When they drive into town it just changes the whole ambience of the country. It’s just big open plains,” he said.

“You see it when you’re driving through the country and a lot of the paddock trees here are in pretty poor health and there’s no young trees coming through,” he told upstart.

“So it could just be a bit of a wasteland in the coming years.”

A document obtained by the NSW Nature Conservation Council predicts that native habitiat destruction on farms could spike by 45 per cent annually.

The land clearing crisis has been a contentious issue in Australia.  The Queensland government recently passed stronger land clearing laws following major environmental concerns for areas of the state that have now been marked as a global deforestation hotspot.

Hunt says that paddock trees in NSW have many benefits for farms in providing shelter for livestock, preventing erosion and improving overall crop quality.

“There’s also the fact that bark and leaves fall off and that’s food on the ground for invertebrates, but also enriches the soil as well. So the whole farm health is benefited by having the paddock trees,” he said.

Despite the plethora of evidence proving the value of scattered paddock trees, Hunt believes that the information has failed to filter down into many farming communities as a result of the data being tied up in legal environmental documents. 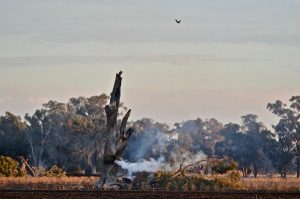 Meanwhile, some farmers disagree with the science. Some are simply unaware of it.

John Ford, a farm manager in Savernake who clears paddock trees regularly, is one of those farmers.

“I’ve never seen any of those reports. I’ve always been taught that gum trees poison the soil so I might be naïve. I might be the one who’s wrong,” he said.

For Ford, clearing trees improves the broadacre farm he runs, which operates on a five- to ten-year plan.

“My benefits for my operation is that it makes me more profit and [is] saving me money. I don’t overlap on chemical. I don’t waste fertiliser feeding trees,” he said.

Ford has received backlash for clearing trees, however, admitting he “did rip out a lot”.

“Yes, I have got talked about behind my back … I try to do the best thing for our company,” he said.

For Ferguson, the actions of these farmers is short-sighted.

“They’re only thinking about tomorrow, about today. They’re not thinking fifty years down the track,” he said.

“It will bite this country. It will change the rainfall, there is no doubt about it in my mind.”

Alexia Mitchell is a first-year Media and Communications (Sport Journalism) student. You can follow her on Twitter @lexilegs99

All photos by Andrea Patford