The world's top quizzers will be converging in Athens for the inaugural Quiz Olympiad in November, writes Marie Trevithick. 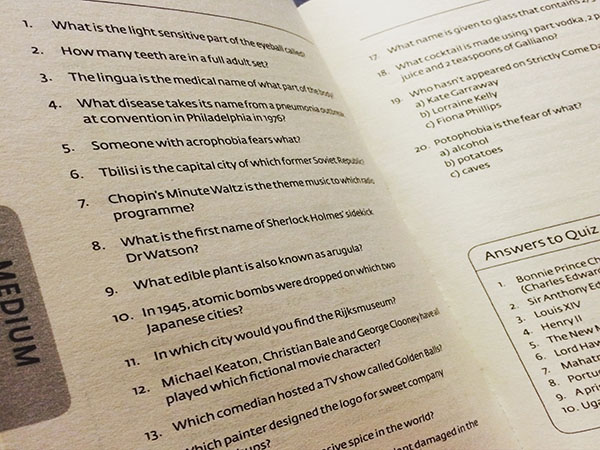 Do you know which of Beethoven’s five piano concertos is nicknamed “The Emperor”? Or which actress won the Best Supporting Actress Oscar after only eight minutes of on-screen time in Shakespeare in Love?

If so you may be suited to the world of competitive quizzing.

The first international Quiz Olympiad will be held in Athens, Greece, from November 3 to 6 this year. The event will showcase over 500 quizzers from all around the world, including eight Australians, taking part in different quiz events.

Quizzing Australia has announced the two Australian teams vying for glory at the event.

Regal and Evans have both been Australian Quiz champions on two previous occasions, with Regal holding the title in 2007 and 2010 and Evans in 2012 and 2015. Logue has held the Australian pairs title for the past three years.

The Australian teams for the Olympiad were selected based on performances in the World Quizzing Championships, an annual event in which quizzers from all over the world participate in the same quiz simultaneously.

“India, the USA and several western European countries will, I expect, field very strong teams so our chances of winning are slim, but we are hoping for a top 10 finish,” he tells upstart.

The current Australian quizzing champion, four-time individual winner and five-time pairs winner Issa Schultz, is unable to attend due to commitments with television game show The Chase Australia, where he stars as the “Supernerd”.

Schultz echoes Kelly’s belief that the Australian team will impress in Athens.

“Most of the members I know personally, I am sure they will do well. They bring a wide range of knowledge between them and cover a good age range,” he says.

“Their strongest challenge will come from the British team and also the Belgians.”

The premier event for the Australian teams will be the National Teams Quiz for teams of four.

This quiz consists of 100 questions over seven rounds, according to the Quiz Olympiad website. The first five will contain 12 questions each before ramping up to 20 in the final two papers. The highest scoring teams will qualify for the semi-finals with a view to contesting the final in front of an audience.

“The third and fourth placed will play a ‘bronze final’. Teams not making the play-offs will play for final placings also, but in the form of a ‘table quiz’ [all teams facing the same questions],” the website says.

Schultz says that preparation is key for a large scale event such as the Olympiad.

“I feel it is essential to cover as many topics as possible. In terms of last-minute cramming, I like to look at news stories from the previous 12 months – anything from the serious to the light-hearted,” he says.

“Basically I try to find ‘interesting’ news stories that I can picture being asked about.”

Other confirmed attendees from around the globe include Anne Hegerty, who is known as “The Governess” from the UK and Australian editions of The Chase, and Barry Simmons from the BBC quiz show Eggheads.