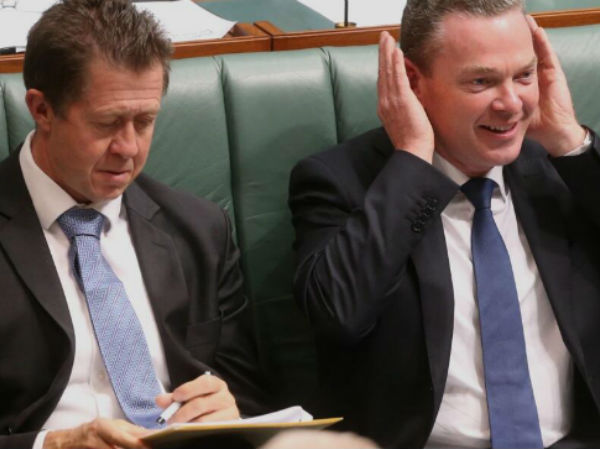 Moments before the helter skelter of the opening Question Time of this parliament’s final sitting week, outgoing Coalition MP Alex Somlyay used his valedictory to plead with the parliament he has been a part of for over two decades.

For the restoration of respect, and confidence in, the parliament.

Question Time, according to Neville, has devolved into a climate of “meaningless spin and invective.”

Two stalwarts of the House, with a combined 43 years served, used their last political breath to bemoan the sorry state of affairs Australian politics has become.

Unfortunately, the message seemingly went over the head of their Representative cohorts.

With frontbenchers on both sides of the aisle filing into the House, Coalition backbencher Kelly O’Dwyer shot from her seat, immediately launching on an derisive description of the government’s healthcare policies.

However, this was only after opening her remarks by reminding us all – in what would be a sign of things to come from the Coalition side – it has been three years since Julia Gillard took the Labor leadership from Kevin Rudd, or as she put it, “knifed Kevin Rudd in the back.”

Expectantly, this drew the ire of Health Minister Tanya Plibersek, who fired back at the Coalition member across the chamber. Indistinguishable cried echoed across the House, before the matter was abruptly ended.

After the hollering halted, O’Dwyer left her seat, a rye smile stapled across her face, seemingly happy with a job well done.

After an opening half-hour of Question Time rightly devoted to the 25th anniversary of Parliament House, and the fallen Australian solider over the weekend, the remaining 45 minutes was indicative of the defining failures of this parliament – from both sides of the floor.

Tony Abbott sent the ball rolling, following up his opening remarks with a supplementary comment; asking for the Prime Minister to apologise for misleading the Australian people in regards to her claims to never introduce a carbon tax.

Amongst the assembled masses gathered in the public boxes opposite; it’s easy to imagine the majority thinking, spare us Mr Abbott, please.

The remaining time bounced between “three years ago today” remarks from the Opposition, and flat-track Dorothy Dixer’s from the government.

By all reports, matters will only further degenerate this week, with the Coalition seemingly hell-bent on surging towards a suspension of the standing orders – or, at worst, a vote of no confidence; while the government is continually plagued by the spectre of leadership divides.

So much for restoring respect and confidence.

The lowlight of the afternoon was provided by Pyne, who set about detailing in depth, the perceived failing of the government, including: “an Australian Day riot, brought about by (Ms Gillard’s) policies.

He made the remark on two occasions, only be shot down by Albanese on both.

Eventually, House Anna Burke ruled his question out of order, and lamented the lack of adult behavior inside the chamber.

Don’t we all, Madame Speaker.