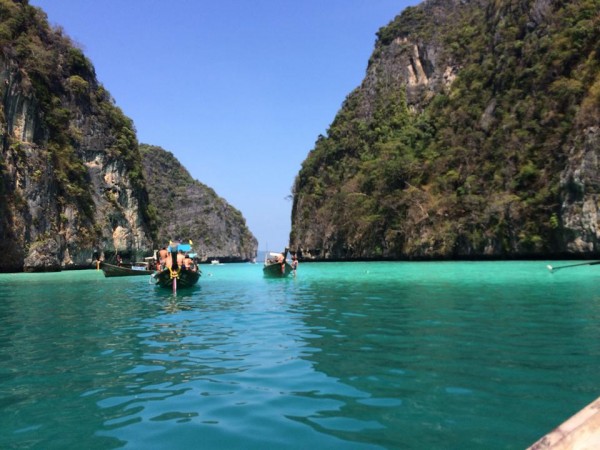 It’s the dreaded time of semester where university holidays are only two weeks away, but exams and assignments are all due before you can enjoy the break.

Admittedly, too many of us procrastinate and turn to Instagram tourism accounts and travel websites to daydream about lazing on a beach at sunset, trekking through a jungle to observe wildlife in its natural environment or roaming foreign cities on Contiki instead of studying.

A Forbes report found that student travel has evolved over the last decade, with young people choosing the-road-less-travelled in remote areas as opposed to major cities. Spending by students has increased by 40 per cent since 2007, with young travellers wanting a new, raw experience rather than the textbook getaway.

But you don’t have to blow your budget to see the world.

Believe it or not, there is an upside to being a student who wants to travel. So many travel companies are willing to offer discounted flights to students, including Student Flights, Student Universe, STA Travel and One Travel.

These discounts make overseas travel realistic and guilt-free for students on a budget, so what are you waiting for? Now is the time to start planning.

Where is your next adventure taking you? #travel #StartTheAdventure #southamerica #organisation Photo taken by @beckkots

The first step is to decide on a destination.

Step one: Blindfold yourself.

Step two: Throw a dart at a map.

Step four: Go to see a travel agent. They will tell you where is safe, fun and affordable and can take care of the bookings for you.

For just a grand or two, flights, accommodation, transport and food can be covered. Student Flights travel consultant Rochelle Stewart tells upstart there is an endless list of destinations suited to a student-budget and Asia is an increasingly popular place for young travellers.

Stewart’s recommendations for students include:

For the more laid-back student and not-so-big spender, Bali is the place to go. It’s a favourite location for Australians in need of a little R & R. Spend the morning visiting a temple, then head to the beach or day spa to relax.

If you are looking for something a little out-there, go to visit the Sacred Monkey Forest Sanctuary in Ubud. Here, you can walk amongst the Balinese long-tailed macaques and see the natural floral beauty the island has to offer.

With a year round temperature of 23-32 degrees, Bali is suitable 365 days a year, but the dry months between May and September are most popular.

Still not convinced? Take a look at the photos from @thebalibible for another reason to visit.

Often referred to as the Land of Smiles or the City of Angels, Bangkok has everything from incredible cuisines found on the floating markets to the ancient ruins of Wat Arun. For relaxed fun, enjoy a drink at one of the many bars in Bangkok with panoramic city views.

Similar to Bangkok, but different.

Sail the Phi Phi islands and snorkel in the water made famous by filmmakers and travellers alike. Upon arrival back to the mainland, sip on bucket-sized cocktails at sunset or trek with elephants in Phang Nga.

Like the nation’s capital, Phuket is most popular over the summer period, which is their dry season. Expect superb sunshine – everyday.

The Lonely Planet offers a tour around Thailand for those on a shoestring budget and it certainly doesn’t lack real Thai experiences.

Formally Saigon, Ho Chi Minh City in Vietnam’s south has so much to offer. Markets and street food along with an abundance of tuk-tuks and motorbikes make the city an increasingly popular destination for young travellers.

Cruise the Mekong Delta with local delicacies at your fingertips, or visit the infamous Cu Chi Tunnels if museums aren’t your thing. If you have the time, Halong Bay is a must-see.

Expect tropical downpours from May to November, but don’t be discouraged – the rain lasts for about an hour each day and rarely affects travel.

Steer away from the beaten track and head towards the Bodhi trees.

Reuters’ list of top ten travel destinations “off the beaten path” describes Sri Lanka as a common “fly-over country” but suggests it is becoming a popular option for budget-conscious travellers “wanting to try something new in South East Asia”. With 14 national parks scattered over the island, you can observe elephants and leopards in the wild.

The fifth century ruins of Sigiriya have been referred to as the Eighth Wonder of the World and are also strongly recommended.

The USA and Europe, although incredibly diverse, can be quite costly. The sheer size of them can make deciding where to go more difficult, and if you’re indecisive and impulsive that could lead to one very expensive trip.

Stewart tells upstart that the US is common for solo travellers, but she recommends group tours around Europe.

“You can just chill out, but still see all the sights,” she says. “These trips are part-guided, part self-guided. They’re good because it’s not necessary that you learn the local language.”

But what about a more local holiday?

Although we live in a beautifully distinctive country, young travellers do not often take trips around Australia.

“Not many people come in wanting travel advice [for Australian destinations]. For the ones that do, Cairns and the Gold Coast are most common,” Stewart says.

Often, overseas getaways are much cheaper than visiting our own shores. A trip around Oz is one your parents may take in 15 years’ time after they spend your inheritance on a garish wannabe-Winnebago caravan.

When you do travel overseas, a checklist is imperative. Be sure to organise travel insurance, a way to access money such as multi-currency cash passports and a travel sim card to keep in touch with worried parents who forget that you’re an adult.

Other things like packing according to the weather and learning language basics are also important.

Take photos, but remember to put your smartphone down for a while to take in the sights – be a traveller not a tourist.

Most importantly, enjoy it.