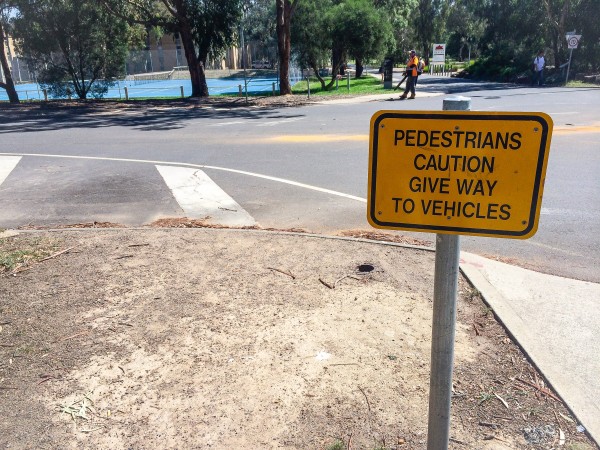 Just yesterday I was driving and almost hit a woman and her two children on Waterdale Road because she chose to cross illegally. I could have been responsible for taking one, if not all, of their lives.

More often than not, jaywalking is considered a minor offence; however, tragic yet avoidable incidents occur when road rules are disobeyed.

If you live in Victoria, crossing the road incorrectly or failing to follow traffic signals could result in $74 less in your wallet.

upstart spoke to pedestrians in Melbourne’s CBD regarding the increased fines that now accompany jaywalking, most of whom “don’t really know” what constitutes pedestrians breaking the law.

The general consensus regarding the fine is that it is “pretty hefty for such a petty law” but most understand why the law is enforced. Many admit they jaywalk because it is “less time-consuming” than waiting at traffic lights.

According to the Vic Roads website, pedestrians are not allowed to do the following:

The ABC reported a 20 per cent increase in Victorian pedestrian deaths last year, with the total rising from 36 to 44.

A total of 32 men and 12 women were struck and killed by motorists. Sixteen of the pedestrians were affected by drugs or alcohol, 12 were hit in the evening or in dark conditions, and four were reportedly asleep on the side of the road at the moment of impact. Two joggers were also hit, both of whom were using headphones.

Although Vic Roads says pedestrians may use their mobile phones or listen to music while crossing the road, police could still fine the pedestrian if they are deemed an obstruction or hazard to another walker or driver.

Sergeant Mark Rose from Melbourne Highway Patrol addressed the issue of jaywalking in an interview with The Age.

“We don’t want pedestrians injured or killed while doing something as simple as crossing the road,” he said.

Six pedestrians have already been killed on Victorian roads this year, all within a very short period of time.

In an attempt to prevent more deaths, Victoria Police introduced Operation Halo. Through this program, police in plain clothes issue fines to pedestrians who are seen crossing streets illegally.

“Pedestrians are road users too, and these operations remind them to follow the rules and stay safe when walking in high-traffic areas,” he said.

In New South Wales, a jaywalking fine will cost you $67. In September last year, police warned 7,000 pedestrians and fined 770 of them in Sydney’s CBD.

Across the Tasman, New Zealanders are fined between $35 and $45 for children and adults respectively.

Pedestrian Ryan James told upstart that the jaywalking fine he had previously received was “unjustified”, despite understanding he broke the law.

“I had been crossing at that particular intersection for eight years. I knew the exact pattern of traffic; there was no way I could have been hit,” he says.

But, if the pedestrian death toll at the beginning of 2015 has taught us anything, it’s that you can never be too cautious when crossing the road.