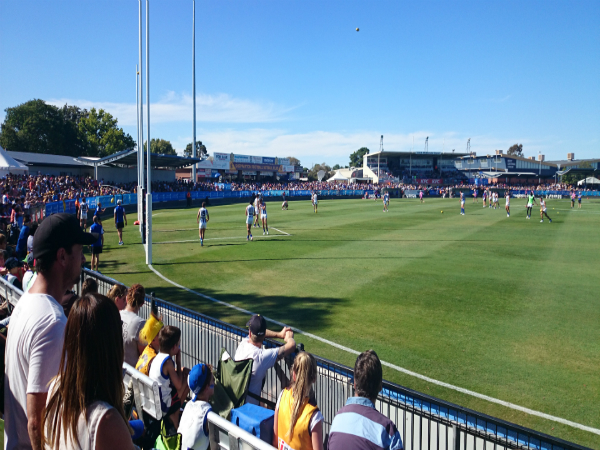 Before the commencement of the 2014 season the AFL announced it would be changing the structure of the pre-season tournament by discontinuing the NAB Cup and replacing it with the NAB Challenge.

Crowds for the NAB Challenge have been flourishing for the most part of 2015, and there is great excitement around the competition as the AFL looks to reconnect with its grassroots.

Most sporting codes are driven solely by maximising revenue but this approach is not welcomed by Tony Liberatore, 1990 Brownlow medallist.

“From my perspective I think it’s a little bit sad we’ve gone so far away from grassroots football,” Liberatore said.

The AFL is now breaking this trend, sacrificing potentially large crowds at bigger stadiums and using the NAB Challenge as a conduit to the community.

In the first NAB Challenge week of 2015 alone there were five matches played regionally compared to seven regional games in the 2014 iteration of the competition.

This drastic increase follows crowd figures for regional matches of the 2014 NAB Cup exceeding 6,000 for all but one game.

During week one of 2015, the crowd sizes equaled this effort with all but the Gold Coast v Geelong match in Townsville reaching 6,000 fans.

Whilst matching last year’s attendance may not seem noteworthy at first, it becomes more impressive when one takes into account that most of the grounds are smaller than those used last year.

Still, one can begin to doubt the overall direction of the competition when analysing some of the fairly poor attendances from week two. It is, however, important to note which teams failed to draw large crowds.

Greater Western Sydney v Gold Coast was by far the most disappointing turnout with only 1,787 people in attendance at Blacktown International Sportspark. These are the two newest teams in the competition, and as such they have not been able to build from a grassroots level like many of their rivals.

The AFL should not be too hasty when making future decisions about regional matches for these sides. If anything, the AFL should look to schedule more pre-season matches in suburban locations for Gold Coast and GWS as the expansion clubs look to establish a connection with regional communities.

At first glance the crowd for the Port Adelaide v West Coast match in Norwood was also disappointing as only 42 per cent of the stadium was filled. The crowd number itself, however, eliminates any cause for concern. With an attendance figure of 9,212, it was the highest for any match played in week two.

Apart from a few outliers, the three sellout games in this year’s competition indicate the community is responding positively to matches being brought closer to them.

Beyond this, the competition also gives the players a chance to reconnect with their communities.

Around 6,000 fans watched on as their local hero kicked four goals in one of the more sentimental moments of the NAB Challenge thus far.

The Western Bulldogs Football Club also created a sense of nostalgia by playing Richmond at Whitten Oval in front of a sellout crowd. The oval had not hosted a competitive match since 1997.

Bulldogs great Tony Liberatore was “quite emotional” to see his club return to the Footscray community which it had developed from.

“It was quite surreal to see some old faces in the crowd, the same people as when I was playing,” Liberatore said.

Australian Rules Football is about bringing people and communities closer together through a shared love of the sport.

By bringing the game back to the community the AFL is winding back the clock in a commercial and profit-driven era.

On the whole, the crowd sizes relative to ground capacity vindicate the decision to host more NAB Challenge matches at suburban locations.

The AFL can even look to make future NAB Challenges exclusive to regional areas in order to continue the grassroots growth of the code.