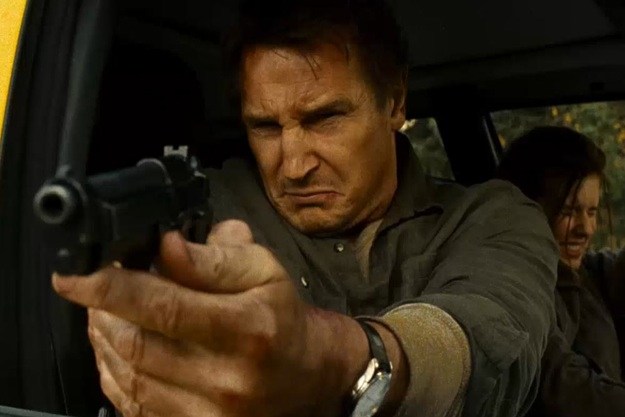 In 2008, after appearing in the blockbuster thriller Taken, Liam Neeson reinvigorated his career and became an action hero star. Almost 20 years after his appearance in Schindler’s List, Neeson found a new audience, appearing in films such as Unknown, Battleship and Wrath of the Titans.

In its opening weekend, Taken proved to be a winner at the box office, grossing approximately $24,717,037 in sales.

The success of Taken soon led to the development of a sequel, despite references to the first instalment as a ‘one off’.

And as a ‘one off’, the original film provides a fair amount of entertainment. Taken is a suspenseful action thriller that relies on the basic formula of a hostage situation. The story follows retired C.I.A agent Bryan Mills and his attempts to rescue his daughter after she is kidnapped by a group of human traffickers while holidaying in Paris. Mills has three days to rescue his daughter, Kim (played by Maggie Grace), and during this time a conspiracy within the French government is revealed.

Taken is certainly an original and enjoyable action film, but does the sequel meet these same standards?

Unfortunately, Taken 2 follows the exact same formula as its predecessor, with Mill’s ex-wife Lenore (played by Famke Janssen) involved in the hostage situation this time round. The story begins when Mills, while on a business trip, invites his daughter Kim and ex-wife Lenore on a holiday to Istanbul. A group of Albanian Mafia soon get a hold of this information and both Mills and his ex-wife are captured.

At the beginning of Taken 2, there is some potential for the film to differentiate itself from the original. This occurs when Mills is captured and becomes a part of the hostage situation. It’s no surprise however, that this plot line doesn’t last long as he emerges from the situation unscathed and the focus quickly returns to the rescue of his ex-wife.

Taken 2 is also a sequel which lacks a great deal of suspense when compared to its predecessor. The first film saw Bryan Mills discover a conspiracy involving human trafficking within the French government. There are no such story-lines in the second instalment, as the main plot instead focuses on Russian Mafia group seeking revenge against Mills for his actions of the first film.

The dialogue also closely resembles the first instalment. ‘I need you to focus’, says Mills as he advises his wife to remain calm. In the first Taken, in an almost identical scene, Mills says the exact same line of dialogue to his daughter Kim.

Fortunately, there is still an appropriate amount of action and scenery to make Taken 2 an enjoyable and light-hearted popcorn film. Director Olivier Megaton maintains the pace of the original as Mills races against the clock to rescue his wife undergoing a series of car chases, train wrecks and grenade explosions. The scenery of Istanbul is well presented, with panoramic shots of the city throughout the film.

Performances in Taken 2 also improve the quality of the film. Liam Neeson once again gives a convincing performance as Bryan Mills, a family orientated, and at times paranoid, C.I.A agent. Neeson continues to live up to his reputation as an action hero star, working successfully alongside his co-stars Maggie Grace and Famke Janssen. Maggie Grace is also believable as the daughter of Mills. Both the Taken franchise and Twilight saga have allowed Grace to improve her reputation in Hollywood, after coming off TV series such as Lost. X-Men star Fammke Janssen is somewhat engaging, once again reprising her role as the anxious mother and occasionally hostile ex-wife of Mills.

With an average storyline and repetitive formula, Taken 2 struggles to provide the excitement and thrill seen in the first instalment. The direction of the film is at times predictable and this makes for a fairly anti-climatic ending to the story.

Still, if you’re looking for a mindless action film with plenty of fist-fights and car chases, Taken 2 may be worth a look.