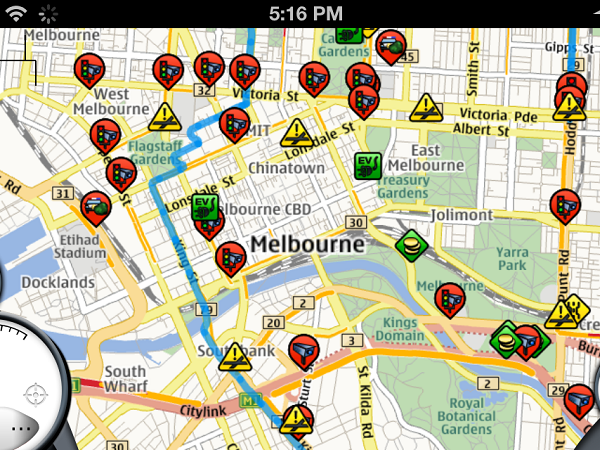 Australians are always looking for ways around the law; it seems to be human nature. Phone applications providing the exact location of police speed cameras and drug and alcohol checks help motorists do exactly that.

Apps including iSpeedCam and Trapster are completely legal. They locate speed cameras and known enforcement points then alert the driver when they are headed towards one. These apps can work on most GPS-capable phones, so it comes as no surprise that they have become increasingly popular.

A spokesperson for the Victorian Police has told Fairfax: “While it is disappointing that motorists would consider drink driving and using this technology to attempt to avoid detection, there is nothing currently illegal with the application.”

Although the information on checkpoints is gathered in different ways, the data predominantly comes from other users adding locations when they see police and sometimes from existing databases as well.

While they have their advantages, these kinds of apps aren’t without their flaws. Because they mostly rely on information from other users, speed cameras on busier roads are well covered by the map, but quiet roads and back streets may be hiding a few surprises.

Twenty year old Joe Robinson has received two fines, an eighteen month loss of licence and one court appearance as a result of speeding. He was driving 30km over the speed limit when he crashed his car and was caught a second time on speed cameras.

When asked if these applications could have prevented him getting caught he said:

“The camera I definitely could have avoided, seeing as I didn’t see it until it was too late, but the other one not so much.”

It’s not just phone applications that are providing this information. Most Australian states have Facebook pages set up for the same purpose as well.

Melbourne BoozeBus and Speed Camera Locations is a Facebook page established in October 2010. The forty thousand people who have liked the page more than double the number employed by the Victorian Police Force.

On the page, people post the locations of speed cameras, breath testing and drug testing check points, as well as news reports on the latest police technology and road statistics.

With advice on how to avoid the law and get out of fines, the page has the overall feel that it’s ‘us’ against the police. Although it does make one wonder: wouldn’t it be easier to just drive within the speed limit?

Queensland, Western Australia, Tasmania and South Australia have similar pages, with their likes ranging from three thousand to over sixty thousand.

While these pages don’t appear to view speed enforcement as a help to society, statistics tell a much different story.

Part of this decrease was attributed to speed enforcement.

It’s the same story in New South Wales, where speeding contributes to around forty per cent of deaths on the road and costs the community $1.5 billion every year.

Although the focus of this technology is to avoid getting caught speeding or drink driving, it raises other issues.

In Victoria, it is illegal for a learner or provisional driver to use a mobile phone at all while driving. Furthermore, even for a fully licensed driver – when using a phone as a GPS – it must be fixed to the vehicle in a commercially designed holder.

Therefore, not only are these applications allowing people to speed or drink drive and avoid detection, but it places them at a bigger risk of having an accident because they are being distracted by their phone.

As in the case of GPS devices and other applications, it may be a better idea for the focus to be on warning motorists of the correct speed, rather than helping avoid it.

Tahlia McPherson is a third year Bachelor of Journalism student at the La Trobe University and is one of upstart’s staff writers. You can follow her on Twitter: @TahliaMcPherson